Former site of a Burlington Coat Factory at 51 Park Place

Park51, previously Cordoba House, is a proposed Islamic community center in New York City. In certain idiotic media outlets, the building has been nicknamed the "Ground Zero Mosque". The term is misleading because the center is neither a mosque (although it will contain a prayer room) nor actually at "Ground Zero," the place of the 9/11 terrorist attacks, being a good few minutes' walk away and completely out of sight from the area.

The misinformation from mostly conservative media is arguably some of the most deranged and delusional shit-stirring of the last decade.

In general, the objection to the community center (or "mosque," just keep saying it), is because it was Islamic terrorists who destroyed the World Trade Center (silly conspiracies notwithstanding) and it would be distasteful to turn the area into a center to promote Islam. An outfit called "9/11 Families for a Safe & Strong America,"[1] which claims to represent the families of 9/11 victims, stated that Park51 was "a provocative act" on the part of Muslims, while another outfit called "September Eleventh Families for Peaceful Tomorrows,"[2] also claiming to represent 9/11 victims' families, expressed support for it. Congressman Peter "There Are Too Many Mosques in This Country" King (R-Long Island) got all offended and made a lot of noise about how the Muslims in charge of Park51 were being "insensitive," "uncaring," "offensive," etc.[3]

Carl Paladino, a racist Teabagger who ran for governor of New York, made the same argument about Park51 being "insulting" to the victims' families. One of the policies he ran on was using eminent domain to prevent the Park51 site from being built. Hilariously, he got his ass handed to him in the 2010 midterms, despite carrying around a slugger.[4]

Newt Gingrich, former Republican big-shot, has posited that the original name for Park51, the Cordoba House, is a thinly veiled reference to the Great Mosque of Cordoba, which was built in Al-Andalus, as Spain was called during the period of Islamic rule, and which Gingrich claims was meant to symbolize Islam's victory over Christianity in that area.[5] Because that wasn't enough of a stretch, this led to speculation that the name instead references the luxurious Chrysler Cordoba and its rich Corinthian leather, which has been alleged to symbolize the upscale personal luxury that Muslims believe the 9/11 attackers now enjoy in heaven.[6]

Numerous conspiracy theories surfaced that Imam Feisal Abdul Rauf, the major backer of the project, had ties to terrorist organizations and was an anti-American Islamist. This was despite the fact that Rauf had actually worked with the FBI during the Bush administration.[7] 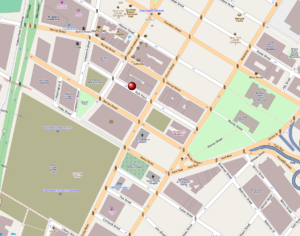 The first and most obvious objection to the above arguments is that they fail to draw a line between a knot of extremists led by Osama bin Laden and millions of Muslims who are not only disinclined to blow things up, but are actually opposed to bin Laden, believe in freedom of religion, and think much better of America than many non-Muslim Americans. Of course, if conservatives keep up the mud-slinging, this bright outlook might be considerably dimmed; nothing alienates people more than being stereotyped and assigned collective guilt. A proof of this bigotry is seen in terrorism motivated by other religions. The Ku Klux Klan was largely motivated by "Protestant values," yet there are few objections raised to churches being built near historic lynch sites. Quite interestingly, the same group who opposed the "mosque" is now rallying against the removal of confederate statues - structures built to honor people who fought to preserve a system responsible for many, many more casualities than all modern Islamic terror attacks combined. Make of that what you will.

From the legal standpoint, another issue facing the community center's opponents is where they think it is acceptable to build such a center. Two blocks from Ground Zero? Three blocks? Outside of Manhattan Island? This theoretical limit and distinction is rarely discussed. This limit certainly can't stretch as far as the mosques already in New York, or even the Halal shop that's situated closer to the World Trade Center site than Park51 itself (to say nothing of the Halal food carts that are practically inside the memorial).

It could be considered ironic that people who consider themselves patriotic Americans and purport to believe in the rights secured by the U.S. Constitution had been urging the government into a violation of the Free Exercise Clause of that constitution's First Amendment. Lots of people will miss that irony.

Some sections of the media and much of the general public attribute "hallowed ground" status to the 9/11 area. Though there seem to be few, if any, objections to the New York Dolls strip club[8] being closer to Ground Zero than the proposed community center.

The entire furore over the the community center would be a mini-storm in a teacup, and a fairly boring one at that, if it weren't for the misinformation and rumors about it. There are crazier rumors spread, and these are the responses:

Plans for the Park51 cultural center were eventually shelved by the site's developer, Sharif El-Gamal, in 2011 amid financing struggles, internal disputes, and property disputes on 49 and 51 Park Place with the Consolidated Edison energy company. After quite a bit of real estate wrangling, El-Gamal eventually announced in late 2015 that Park51 will be the site of a 70-story high-rise of ultra-luxury flats, with prices of over $3,000 per square foot, set to open in 2017[10]

Oh, but there'll also be a three-story Islamic museum and prayer sanctuary, connected to the building by an open plaza. So... there is that.[11]