Democratic Republic of the Congo

Map of the DR Congo.
Democratic Republic of the Congo

) or Congo-Léopoldville[note 3] (to distinguish it from the other one),[note 4] as the Belgian Congo, and (no doubt sarcastically) as the Congo Free State), has been much abused and victimized since it came into being in its current borders as the private property of Belgian King Leopold II,

following an elaborate ruse by said monarch preaching humanitarian intentions towards the local population and making various promises to political leaders.[note 5] Ironically, the US was the first nation to acknowledge Leopold's claim to the territory.

The abuses of the Leopoldian regime

were so bad that even the colonialist 19th century was shocked by it. Many of the atrocities resulted from Leopold setting unrealistically high rubber quotas and demanding the death penalty for anyone who failed to meet them. In addition, chopped-off hands were required as 'proof' of such state-sanctioned killings. It was feared soldiers might forego executing these punishments to save their rather pricey bullets for other purposes.[note 6] Books such as Heart of Darkness

and numerous pamphlets deal with these crimes. The "solution" (namely giving control of the Congo over to the Belgian state) found in the late 19th century made conditions somewhat better for most Congolese, but not by that much.

The Belgian Congo was essentially an apartheid-type regime and initially focused on the region's economic exploitation, though forced labor and the murderous practices of Leopold's rule were abolished, of course. The Congolese arguably also experienced some benefits from the overly patronizing, paternalistic, religiously-tainted, and blatantly racist civilizing mission

the Belgian colonizers took upon themselves, such as education and improved healthcare. Furthermore, some of the infrastructure the Belgians built,[note 7] like railroads, still exists in various states of disrepair.[note 8] Following the events of the two World Wars, in which the Congolese army had taken a major part on the African continent (with Belgium taking all the credit, of course), and events unfolding in many other colonies, a political independence movement began to assert itself among the local population. 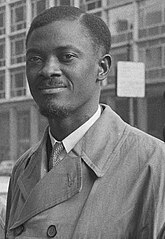 Maybe you thought achieving independence in 1960 would've given the Congolese a bit of a breather. Well, think again. On the eve of independence, hardly any native Congolese held any higher or mid- administration position, let alone one of political leadership. Furthermore, there was a lack of well-educated people in almost all fields, and the few who did hold such degrees were Belgians or allied with the former colonial regime. This was a disaster waiting to happen, and of course, Belgian authorities were fully aware of this. But following violent protests and riots and relations between the local population and white colonials growing increasingly tense, the Belgian government hastily went ahead with it to avoid becoming involved in a costly, bloody, and likely futile colonial war. Additionally, some anticipated that Belgian forces would later sweep in as the "great saviors" once the country had descended into chaos, and colonial control might be reasserted.

But Congo still had a chance at building a somewhat workable government when in 1960, Patrice Émery Lumumba

took over as prime minister. However, a political standoff between Lumumba, whose party held the relative majority, and the third-largest party, whose leader gained the position of president, quickly ensued. In a climate of mutineering soldiers and various localized rebellions, the province of Katanga even seceded from the Republic.

With the UN considering Katanga's secession an internal affair and refusing to intervene, Lumumba called upon the Soviets for help.[note 10] Take note that much of the world was engaged in the Cold War. 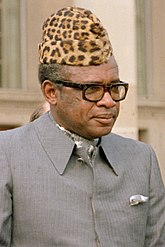 Mobutu, a job creator[note 11] with a US$5 billion net worth,[note 12] who often partook in the guilty pleasure of driving a Mercedes[note 13]—What, you thought he was evil?[note 14]

By the next year, Lumumba was deposed and dead—assassinated by Katangan forces, with support from Belgium and the US[1]—after which, several (more) years of political chaos and civil unrest

would ensue. Many temporary governments succeeded one another until, in 1965, following a political deadlock (a situation that had become rather common during this period of post-colonial turmoil), the guy in charge of the Congolese army took control of the country in a bloodless military coup.[note 15] The new leader—who would rule the country with an iron fist until shortly after the end of the Cold War—was one Joseph Mobutu

, who later changed his name to Mobutu Sese Seko Nkuku Ngbendu Wa Za Banga ("The all-powerful warrior who, because of his endurance and inflexible will to win, goes from conquest to conquest, leaving fire in his wake").[2][note 16]

While Mobutu was a nepotist, a kleptocrat,[note 17] and one of the worst dictators in African history, at least his regime provided a semblance of "stability". He was able to stay in power mostly thanks to US aid. When the Cold War ended, US funding dried up, and by 1997 the writing was on the wall. Mobutu was forced to resign by rebels led by Laurent-Désiré Kabila

, who conquered Kinshasa and most of the country. Mobutu died in exile shortly after that. But the worst was yet to come. Kabila managed to alienate almost all his allies, including Rwanda and Burundi, and the aftermath of the Rwandan genocide led to an almost constant war in the greater Eastern Congo area that has been referred to as the "Great War of Africa" and the "African World War". In January of 2001, Kabila got himself killed by one of his own bodyguards, and his son, Joseph Kabila,

followed him into the office of president.

Though he already held the position of Chief of Staff before his rise to the presidency, many saw Kabila Jr. as inexperienced as he was the youngest head of state in the world at the time, at the age of 30. Regardless, though, Kabila Jr. managed to negotiate a peace agreement

that ended the Second Congo War

, AKA the African World War (officially at least), and which maintained Kabila as president while granting government positions to leaders of some of the warring parties. Regrettably, however, this did not result in all the fighting ending.

A glimpse of hope for democracy? Maybe not[edit]

My father was president already. You got a problem with that?[note 18]

in, well, ever. Kabila eventually won and his main opponent, Jean-Pierre Bemba,

later relocated to Portugal due to security concerns following an outbreak of violence involving his personal guard.[note 19] However, a year later, he was arrested in Belgium and soon found himself in front of the International Criminal Court as a defendant, charged with several counts of war crimes and crimes against humanity.[note 20]

was held where Kabila was predictably re-elected. This led to outbreaks of violence in areas where there had been large support for Kabila's opponent, Étienne Tshisekedi,

notably including Kinshasa and Mbuji-Mayi, where official tallies showed that a strong majority had voted for the latter guy.[3] Official observers have reported that results from polling stations in Tshisekedi-support areas had mysteriously disappeared and understatedly noted that the government's official 2011 election results "lack credibility".[4]

Kabila's term ended on December 20th, 2016, but he refused to leave office, leading to mass protests and demonstrators being killed by police. A deal was brokered with the opposition party to facilitate a peaceful transition of power.[5]

In 2018, the presidential election was finally held, with opposition candidate Félix Tshisekedi (son of the aforementioned Étienne) winning the presidency over the government-backed candidate Emmanuel Ramazani Shadary. Now, this seems like a standard transition away from the regime. However, it has been widely accepted that the election's real winner was another opposition candidate, Martin Fayulu. Kabila likely secured a deal with Tshisekedi when Shadary had no chance of winning.[6] 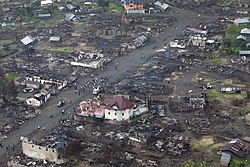 A city in ruins after days of combat between militias.

Okay, so at this point, you might be wondering, "What makes the DR o' Congo so unstable and conducive to violent conflict?" Before we detail the current ongoing conflicts, let's lay out the answer.[note 21] First off, the Democratic Republic of the Congo is a big country. With its 2.3 million square kilometers, it's a close second to Africa's largest country, Algeria. It also boasts a sizable population of around 92 million people[7][note 22] and counts as many as 250 ethnic groups. It is also rich in many natural resources,

including gold, diamonds, cobalt, coltan, and oil, which often end up being used to sustain rebel groups financially.

Now with the basics out of the way, let's focus on the DRC's military:

If the history of the Democratic Republic of the Congo teaches us anything, it's that replacing an authoritarian regime with an ineffective government marred by factional infighting, rebuilding a nation's military from the ground up and arming/supporting a plethora of rebel groups and tribal militia are things that will not facilitate stability, but rather the opposite. If those things sound familiar for some reason, that's because someone was too busy looking out the window during history class.

are, in fact, a militant Islamist rebel group hailing from Uganda. The group, based in western Uganda, has opposed Uganda's government through violent means since 1996 but was largely repelled from the region from 2000 to 2004. However, this has led the ADF to greatly increase its activity on the other side of the border in DRC territory.

In 2013 there was a major resurgence of ADF activity in both the DRC and Uganda, attracting attention from the UN's newly formed Force Intervention Brigade

Intelligence sources indicate the group has collaborated with Al-Shabaab

and the Lord's Resistance Army.[8] An Islamic State financier also apparently donated to the ADF at least once.[9]

See the main article on this topic: Lord's Resistance Army

On January 19th, 2015, protests broke out at the University of Kinshasa

in the eponymous city of Kinshasa

over the announcement that Kabila would stay in power until after the national census was conducted, which, for a developing country, could take several years.[10] By the third day of the protests, clashes between police and protesters had led to over 42 deaths.[10] Government sources initially claimed a death count of 27.[11]

Due to pressure from protesters and the West, the Congolese government formally abandoned the controversial census clause that had been the cassus belli of the protests in the first place. After that, the protests slowly trickled out as a result.[12]

While wars generally don't have a reputation for improving people's quality of life, recent conflicts in the DRC are notably marred by rampant sexual violence

and the use of child soldiers.

Sexual violence is most typically targeted at women and children,[note 23] with reportedly over 65% of victims being children,[13] but the rape of men is also common (and likely underreported).[14] While notoriously routinely perpetrated by militia members, this kind of injustice is not limited to conflict areas.

According to the organization Freedom from Torture,

rape and sexual violence are regularly used by state officials to punish politically active women.[15] Marital rape is also not illegal in the Democratic Republic of the Congo, and domestic abuse is considered socially acceptable by much of the DRC's society. In addition, there are also reports of child labor and forced labor.[16]