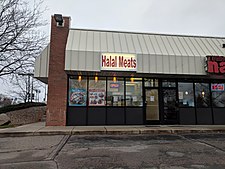 A Halal meat market in Minnesota. It's probably not an ISIS recruiting center.

Halal refers to anything permissible in Islam, but it is commonly used to refer to food or drink meeting Islamic dietary codes, especially meat (much like kosher). When you see "halal" outside a food store, it generally means two things: top-notch lamb but no bacon.

There are animal welfare issues associated with halal slaughter, but halal meat probably does not promote terrorism.

See the main article on this topic: Animal rights

Those pesky anti-unnecessary-suffering folk have spoken against claimed animal cruelty involved in halal-kosher slaughter.[1] In conventional slaughterhouses, animals are stunned before they are killed to minimize sensations of pain. Some Islamic authorities consider stunning to be prohibited, although many halal slaughterhouses do stun their animals.

Farm Animal Welfare Association (FAWC), an independent UK government advisory organisation, released reports in 1985 and 2007 regarding religious slaughter of animals.[2] In both, it observed unnecessary suffering to animals that were not stunned prior to slaughter (i.e., under halal-kosher slaughter). The Royal Society for the Prevention of Cruelty to Animals (RSPCA), UK animal welfare organisation, also holds this position and cites the FAWC's reports as evidence.[3]

Muslims and Jews often cite Schulze 1978, who concluded that halal (and presumably therefore kosher) slaughter was more humane than slaughter following stunning, but warned in his report that the stunning technique may have been incorrectly carried out.[4][5] A 2009 study using brain electrical activity found brain patterns consistent with pain signals in animals cut without stunning that disappeared once the animals were stunned shortly afterwards.[4]

Of note, some have argued that halal slaughter doesn't require the animals to be un-stunned.[6]

A good way to prove that you are anti-terrorist rather than anti-Muslim (or anti-Zionism rather than anti-Jew) is to avoid attacking dietary practices like halal (or kosher), which don't matter very much.

And then there's the anti-halal folks.

A storm in a soup can[edit]

The halal soup controversy began in late 2010 when Campbell's Soup Company test-marketed a line of halal-certified products for the Canadian and later the American marketplace. (The invisible hand of the market strikes again!)[8] This caused a fury of ridiculous hysteria about Muslims in America.

Pamela Geller whipped up the frenzy by claiming this was part of Creeping Sharia through a conspiratorial plot involving the grocery store soup aisle.[9][10] Geller stated that the board certifying the soups has links to the Muslim Brotherhood and "other terrorist groups". (JihadWatch claimed it was actually Hamas.[11]) Apparently, these groups are now funding terrorists and lobbying for the introduction of Sharia law into "middle America."[12] Geller thinks boycotting is the way to go because "The State Department is doing nothing as it is run by Islamic Supremacists."[13] Meanwhile, folks over at "Boycott Campbell Soup" had some amazing insights, including:[14]

This is yet another example of just how dangerous creeping shariah is to Western Civilization, Democracy and all freedom loving peoples. There are stages to the islamization of non-islamic countries. [...] This is just another way that terrorism and it's sponsors are insinuating themselves into our culture, Terrorists are NOT freedom fighters they are murderous thugs and I will not pay money for soup or any other product that supports, aids or abets their tactics. Hope someone puts a list out of all of Campbell's affiliates.

More recently, Geller has warned us that those juicy Butterball turkeys are Halal, and therefore are a threat to patriotic Thanksgiving celebrators.[15] And in Australia, both Reclaim Australia and the United Patriots Front have constantly put forth the rhetoric that halal foods funds terrorism. Their evidence is, shall we say, scanty.[citation needed]

Australian government agencies state that there is no evidence that Halal has any link to terrorism.[16] Of course, the Islamophobes plead that absence of evidence does not mean evidence of absence.[17]

In fact ABC News even did an investigation on the supposed link between Halal food and terrorism. The result? Negative:

As far as we can tell, Geller et. al have nothing to say about Campbell's kosher products.[18]

One other group which may get upset about halal food are Sikhs, who are religiously prohibited from eating meat killed in a ritualistic fashion, as with halal and kosher meat; Sikhs are supposed to eat Jhatka

meat, killed instantaneously and not bled to death. Sikhism often discourages, but does not forbid, meat eating.[19][20]