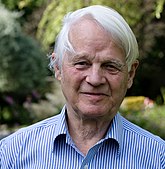 Richard Lynn (1930–) is a British white supremacist, psychologist, eugenicist, and self-described "race realist" who formerly taught at the University of Ulster. A former editor-in-chief of the prominent racist pseudojournal Mankind Quarterly, and an interviewee of many fascist and neo-Nazi groups, Lynn has been claiming for decades that genetics is responsible for racial inequality and international wealth inequality.

Unlike many other researchers with provocative conclusions about race, Lynn is willing to advocate for high-IQ, "genetically superior" societies closing their borders to keep the low-IQ inferior people out.[1] He is probably best known for his work with Tatu Vanhanen,

a political scientist, estimating the average IQ scores of different countries.[2] This work has led him to the conclusion that Sub-Saharan African countries have average IQ scores of below 70, an estimate that has been heavily criticized because of his unsystematic methodology.[3] His work on alleged race differences in intelligence gained prominence when it was cited in the Bell Curve.[4] His work on African IQs has been shit on by the scientific community and is itself full of shit. In getting the IQ for Equatorial Guinea he tested 48 mentally challenged 10 year olds living in Spain, in getting the IQ of Ethopia he tested the IQ of illiterate Ethiopian Jews who had just immigrated to Israel (who experienced an abrupt transition from rural Ethiopia to urban Israel with all the accompanying effects that it entails such as trauma, dislocation, and cultural shock), and to get the IQ of Somalia he tested poor Somali refugees living on slums in Kenya and Ethiopia.[5]

Shoddy "research" he's published that has been shot down by other researchers include the following:

This racism-related article is a stub.
You can help RationalWiki by expanding it.
Retrieved from "https://rationalwiki.org/w/index.php?title=Richard_Lynn&oldid=2450923"
Categories:
Hidden category: