From RationalWiki
(Redirected from Lee Atwater)
Jump to: navigation, search

Oscar Wilde on his deathbed in 1900

A deathbed conversion is perhaps the most cynical and nihilistic aspect of some religions. It basically allows for a person to do whatever the fuck they want for their entire life up until the point where they are facing imminent demise. The person converts to whatever religion they think will send them up to Heaven and promptly croaks (or recovers and recants). Some religions implicitly encourage this sort of behavior by having reference to it in Bible, by formal clerical ministration of deathbed conversions, or by emphasizing faith over deeds:

One of the biggest propaganda victories in the book is being able to claim that someone famous for opposing your position has been converted to it. If you're an unscrupulous person, it's irrelevant whether your opponent actually converts, or if they simply die and thus become unable to expose you as a liar. For this reason, there are numerous examples of famous people being claimed to have converted on their deathbeds.

False rumors were spread that each of Thomas Paine,[4] Charles Darwin,[5] Carl Sagan,[6] Christopher Hitchens[7] and Stephen Hawking[7] had a deathbed conversion.

This is an occasional lying-for-Jesus tactic used by evangelicals to allege that the person in question didn't really mean all that rational stuff they did for their entire life. It is not limited to that, however; a famous non-religious example is Louis Pasteur purportedly renouncing germ theory on his deathbed, saying that "[Claude] Bernard was right; the microbe is nothing, the terrain [of the body] is everything."

It's often been observed, in relation to such alleged conversions, that even if the individual really did change their mind on some issue in the last minutes of their life, it's unlikely to actually matter. Darwin and Pasteur, as examples, both amassed significant and convincing bodies of evidence to support their respective theories during their lifetimes. The soundness of that evidence is what matters, not who does or does not accept its implications.

Even within the religions themselves, the quality of these conversions is considered "doubtful" since the individual has no way of showing if they were genuinely converted or simply going through the motions of doing so.[citation needed] 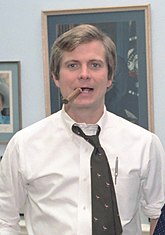 As an example of the meaninglessness of deathbed conversions, ratfucker,[8] racist enabler,[9] and frat bro Lee Atwater (1951–1991) had a deathbed conversion of sorts when he publicly apologized to then-presidential candidate Michael Dukakis for devising the plan to take down Dukakis' campaign with erroneous advertisements claiming that convicted murderer and African American Willie Horton was paroled because of Dukakis. Subsequent to his parole, Horton then was convicted of raping a white woman. Atwater used this crime as a dogwhistle for the racist Black brute stereotype. While Atwater was dying from brain cancer, he issued a public apology and claimed that he wasn't actually racist.[10]

In reality, Atwater's apology was just one last PR scheme. According to Ed Rollins, Ronald Reagan's campaign manager from 1984, Atwater had claimed that "the living Bible was what was giving him faith." Mary Matalin, Atwater's aide in 1988, told Rollins that Atwater's "Bible was still wrapped in the cellophane" when he died.[11]