From RationalWiki
(Redirected from Portmanteau)
Jump to navigation Jump to search

The portmanteau is an extremely lazy way of producing neologisms, often used by women's magazines, religious groups, extremists, and those who lack the benefit of a proper Classical education. This means of producing new words, by ramming two (or more) old ones together seems to be particularly favoured by totalitarian states. Portmanteaux (for that is the proper plural) are often unwieldy, ugly, and incredibly cheesy. De gustibus non disputandum est.

It is also on the increase. Be warned. 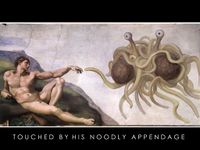