From RationalWiki
(Redirected from Daniel)
Jump to navigation Jump to search 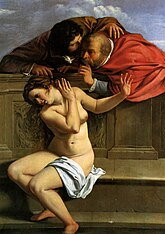 "Susanna and the Elders" by Artemisia Gentileschi (1610)

Daniel is an Old Testament book about and supposedly by Daniel (an advisor to the King) who foretold the future. It combines six chapters about the court of Nebuchadnezzar, king of Babylon, with a further six chapters of vague prophecy. There are also a few apocryphal chapters which may or may not be present in your Bible.

Daniel is not technically a prophet in the Jewish sense, since he talked with angels not God, and since he talked to future generations not the current generation. The last half of Daniel describes the destruction of the world and the coming of the Messiah. For Christians, this carries important events that must pass before Jesus can come to the Earth.

Famous stories from the Book of Daniel[edit]

Chapters 2 and 7-12 describe various visions involving a great image whose brightness was excellent (ch 2); four beasts from the sea (ch 7); a ram and a one-horned goat representing the Medes and Persians and the Greeks (ch 8); a revision of Jeremiah's prophecy that Jerusalem would be ruined for 70 years, which is upgraded by Gabriel to a massive 490 years (ch 9); and a war between Greece and Persia (ch 10-12). All of these have been widely studied by would-be prophets of doom attempting to predict the end of the world. It is claimed by some to able to prophesy to the day when that the messianic redeemer would appear and the execution of that figure.

Based on the prophecies, which run up to around 167 BCE, the book's composition is conventionally dated to between 167 and 164 BCE.[1]

The prophecy found in Daniel 2[edit]

The prophecy of the 'future' kingdoms in Daniel 2 is found in verses 31-41. King Nebuchadnezzar has a vision in verses Daniel 2:31-33 of a 'great image' whose 'head was of fine gold, his breast and his arms of silver, his belly and his thighs of brass, his legs of iron, and his feet 'part of iron and part of clay'.

Having metal associated with kingdoms or generations was a common ancient motif. The earliest example that has survived comes from Hesiod's Works and Days which dates to around 700 BCE. In II 106-201, Hesiod tells of a tale about "how the gods and mortal men sprang from one source."

This is the same progression of metals seen in Daniel 2.[note 1] A similar metallic motif is found in Zoroastrianism:

and the Zand-i Wahman yasn

postdate Daniel but are thought to draw from an old Avestan tradition.[5]

The prophecy found in Daniel 7[edit]

The prophecy of the 'future' kingdoms/beasts in Daniel 7 is found in verses 3-7.

In Daniel 7:17, it is explained that 'these great beasts, which are four, are four kings, which shall arise out of the earth.' In Daniel 7:25 the fourth beast 'shall wear out the saints of the most High' and in Daniel 7:22 the Ancient of Days comes to the rescue.

discovered in the ruins of Ugarit in the 1920s. In the Baʿal Cycle, Baal[note 2] fights against Yam

which is a sea and river god thought to represent chaos. Yam's beasts

are the sea monsters Tannin

, and "Šlyaṭ of the seven heads."[6][7] Lotan is thought to be associated with the biblical Leviathan.

Daniel 7 is also interconnected with the book of 1 Enoch.

Interpretations of Daniel 2 and Daniel 7[edit]

The are numerous different interpretations as to which kingdoms or kings were being talked about in these passages. The first recorded debate on this subject occurred between St. Jerome

and the Neoplatonist philosopher Porphyry.

Speaking of Daniel 2, St. Jerome argued the first empire was "the Babylonian," the second was "the empire of the Medes and Persians" the "third empire signifies the Alexandrian empire, and that of the Macedonians, and of Alexander's successors," and "the fourth empire… clearly refers to the Romans." Porphyry took the position that "whatever is foretold concerning Antichrist at the end of the world was actually fulfilled in the reign of Antiochus Epiphanes,"

a Hellenistic Greek king of the Seleucid Empire who Jews led the Maccabean revolt against.[8]

Dr. Michael Heiser refers to this as the popular dispensational view. He goes on to explain that the majority scholarly view is closer to that of Porphyry. The four kingdoms in this view are the Babylonian, the Median, the Persian, and the Greek. Moreover, the kingdom that resulted from the Maccabean Revolt was what was represented by the stone that was cut out without hands. A minority scholarly opinion holds that kings, not kingdoms, were being refereed to and the four kings were Nebuchadnezzar, Belshazzar, Darius the Mede, and Cyrus the Great.[9] Both the majority and minority scholarly opinions are contingent on the fictional Darius the Mede

considering it was Cyrus the Great and the Persians, not the Medes, who defeated Nabonidus

, and the rest of the Neo-Babylonians. The author of Daniel devotes Chapter 6 to this Darius the Mede character.

Daniel 7 has a number of different interpretations as well. St. Jerome maintained his Babylon, Persian, Greek, Roman view.[8] Some traditionalists maintain this view as well, arguing the ribs in the bear's mouth are the nations of Babylon, Lydia, and Egypt conquered by Persia, the four heads of the leopard represent the four divisions of Greece and the swiftness of its conquests, and the fourth beast represents the Romans who crush their foes.[10] Porphyry "assigned the last two beasts… to the one realm of the Macedonians and… claimed that the leopard was Alexander himself, and that the beast which was dissimilar to the others represented the four successors of Alexander, and then he enumerates ten kings up to the time of Antiochus, surnamed Epiphanes, and who were very cruel."[8] According to Dr. Heiser, the majority and minority scholarly opinions for Daniel 2 are maintained in Daniel 7.[9]

The schema of the four kingdoms, however defined, has led to various claims about a Fifth Kingdom, successor of the four great kingdoms of antiquity. This Fifth Kingdom is usually regarded as blessed by God, and often associated with millenarian ideas, possibly ushering in the end times in accordance with the Book of Revelation. Various present and future realms have been nominated.

The Fifth Monarchists were an English Christian group during the English Civil War and Commonwealth that followed, which believed they were establishing the Kingdom of God. This was part of a tendency of millenarian thought associated with the Civil War and 1666: Year of the Beast.

(Quinto Império) is a Portuguese idea claiming that Portugal's colonial empire was the successor to those described by Daniel. It was first promoted by António Vieira

in his book Mensagem (Message).