From RationalWiki
(Redirected from Thule)
Jump to: navigation, search 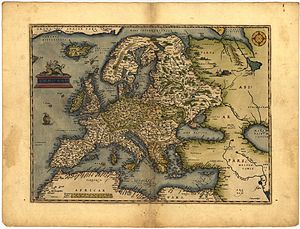 Hyperborea, Thule, and Ultima Thule are names of mythical utopian far-northern places from pre-modern geography or pseudo-geography. They have featured in a wide range of mythology and nonsense, from the ancient Greeks to recent esotericists and mystics, including Theosophists such as Helena Blavatsky. They have also been adopted by the far-right as part of esoteric Nazism, a philosophy which considers some northern land to be the secret place of origin for the Aryan race.

Although such a far-northern utopia never existed, these mythological realms have been equated to actual geographical areas including Sweden, Ireland, Romania, Celtic northern Europe in general, central Asia, or the shores of the Arctic Ocean. Some of the legends may represent actual historical encounters, but evidence is lost in the depths of time, and claims that far-northern people are the ancestors of Aryans, Teutonic people, Scandinavians, Celts, or Proto-Indo-Europeans are almost certainly false.

The classical Greeks and Romans had fantastical tales of a far northern land, often with great riches and eternal light (possibly a misunderstanding of the midnight sun experienced in arctic summers). Pytheas

claimed to have visited Thule, "in which there was no longer any proper land nor sea nor air, but a sort of mixture of all three of the consistency of a jellyfish in which one can neither walk nor sail, holding everything together, so to speak."[1] Strabo,

Pliny the Elder, and Tacitus

mentions a place called Ultima Thule, which appears to be a metaphor for an imaginary, unattainable place, rather than a real geographical location.

"Hyperborea" means literally the land beyond the north wind, and is mentioned in several Greek writers. Hesiod

described contact with Hyperboreans, but it has been hypothesised he may have meant the Scythians who dwelt north of the Black Sea and Sea of Azov.[2] Hyperborea is mentioned by Herodotus and Pindar

as a perfect land. It has been hypothesised that Herodotus's account, which he claims is taken from an explorer called Aristeas, reflected memories of Greek trade with wealthy Celtic people in the north of Europe such as the Hallstatt culture.[3] Herodotus appears to have been skeptical about claims of a far northern people.[4] Possibly drawing on similar ideas, Hyperborea appears in various Greek myths, with Perseus and Heracles travelling there on their adventures and Phaeton crashing the chariot of the sun up north.[5]

In 17th century Sweden, nationalists and particularly Gothicists (who celebrated Geats/Goths[note 1] as the founders of Sweden) claimed that Sweden was the mythical paradise of Hyperborea. Olof Rudbeck,

a Swedish professor of medicine and passionate Swedish patriot, advanced such ideas, associating Sweden with Hyperborea, Atlantis, Ogygia (home of Calypso in Homer's Odyssey) and the original land of the Druids: he mapped Homer's account of sailing to Ogygia onto north European geography, and then assumed all the authors he considered were all talking about the same place.[6]

There was a tendency in Celtic revivalism and Irish nationalism to equate Celtic regions such as Ireland with Hyperborea; this is mocked by James Joyce in Ulysses.[7]

John G. Bennett, drawing on work by J. Rhys and B.G. Tilak, claimed the original speakers of the Proto-Indo-European language, whom he equated with the authors of the Hindu Rigveda and Zoroastrian Avesta, were Hyperborean.[8] Bennett argued that they originated on the shores of the Arctic Ocean. He bizarrely believed that they deliberately created Proto-Indo European as an entirely new language and would therefore have required a lot of long dark nights with nothing to do. Needless to say, this is not a mainstream view, and most linguists assume that PIE evolved gradually from earlier languages that we can have no knowledge of, and that the speakers of PIE were unremarkable in most ways.

A number of mystics such as Helena Blavatsky, René Guénon

and Julius Evola have claimed that humanity originated in the perfect northern land of Hyperborea, but gradually moved south and devolved (these Hyperboreans were either our literal ancestors or the origins of our culture and civilisation). Blavatsky, the founder of Theosophy, equated the Hyperborean people with the Cyclops in the story of Ulysses: his single eye demonstrates mystical vision. The importance of Apollo in Greek myths of Hyperborea was for Blavatsky also a symbol of the relationship between the far northern people and the god of prophecy.[9] Blavatsky's Hyperboreans were yellow, reproduced by budding, and have no direct descendants.[10]

Robert Charroux connected the Hyperboreans with the ancient astronauts, who apparently came from a cold planet and hence loved the north.

Nazi occultists such as Heinrich Himmler believed the Aryan race came from some mythical northern province of Thule or Hyperborea. The fake Frisian text Oera Linda Book refers to ancient Nordic civilisations and was popular with Nazis.[13] The Thule Society, an occultist group in Munich, was connected with the early history of the Nazi party.

More recent far-rightists have also been interested in an imaginary northern origin. This allows them to proclaim their difference from other people with darker skins. Robert Charroux's writing is particularly influential in this. Miguel Serrano's

Esoteric Hitlerism was similar: he believed Hitler was a divine avatar come to earth to battle evil and the Aryan race were the descendants of Hyperboreans of extraterrestrial origin.[14]

The White Order of Thule

Various works of fantastic fiction including Robert E. Howard's Conan the Barbarian stories also feature a land called Hyperborea. In his case it seems to be somewhat inspired from the Theosophist claims.

In the 1977 fantasy film, Sinbad and the Eye of the Tiger, Hyperborea is where Sinbad and his crew need to go to disenchant Prince Kassim.[16]

There was a town in Greenland called Thule, but its inhabitants were relocated to build the US Air Force's Thule Air Base.[17]

in 2019 the farthest object in the Solar System to be visited by a spacecraft, was nicknamed Ultima Thule. When the craft's images returned to Earth, it was realized that the object was likely composed of two primary parts that joined together, and they were separately named Ultima and Thule.