Charlemagne (740s - 814 CE) was one of the greatest European leaders in the period following the fall of the Western Roman Empire. Otherwise known as Charles the Great or Karl I, he greatly expanded the kingdom of the Franks to include much of France, Germany, and northern Italy, establishing the Holy Roman Empire. He also fought against the Moors in Iberia, during which time he was famously attacked by the Muslims Basques, as mis-commemorated in the Song of Roland. He helped popularise the notion of kings being chosen by God, is one of about 1000 great military leaders linked with the Holy Lance or Spear of Longinus, and was a role model for Napoleon[1] (who was fond of declaring "I am Charlemagne"[2]), Hitler (Charlemagne being the founder of the First Reich and Hitler the Third[3][4]), and a lot of people concerned with the European Union.[5]

His grandfather was the great military leader Charles Martel who had saved Europe from the Muslims at Tours (732), and his father was Pippin III the Short, who in 751 seized the throne of the Frankish kingdom in the west of modern Germany, ending the Merovingian dynasty and establishing the Carolingian. On Pippin's death in 768, his lands were split between Charlemagne and his brother Carloman, but the latter died in 771 and Charlemagne took everything. He was a skilled warrior but also known for his political and administrative skills and his promotion of Christian Latin culture.[6]

He began his conquests by defeating the Saxons under Widukind in a long war, then Pope Adrian I asked him for protection and he took large areas of Italy, becoming king of Lombardy. He also fought in Spain against the Umayyad Caliphate of Cordoba, with mixed success, and conquered some islands in the western Mediterranean, Bavaria, and a large part of the upper Danube, while negotiating with other neighbours in Italy and the Balkans. On Christmas Day, 800 CE, he was crowned Holy Roman Emperor by the Pope, in gratitude for defending the papal lands.

He promoted the idea of kingship as a position given by God, responsible for the spiritual well-being of his subjects, giving himself new power over religious matters, as well as being the secular successor of the emperors of Rome. Following his death there were nearly 50 years of civil war under his son Louis the Pious and descendants, ending with his empire split into three parts: Louis the German got Germany, Charles the Bald got France, and Lothair I got the bits in the middle from the Netherlands through Lorraine, Burgundy, and Provence, to northern Italy.

A large body of legend was created about Charlemagne, collectively called the Matter of France, and performed in the chansons de geste, songs of heroic deeds.

The Song of Roland

was the earliest work of French literature and one of the greatest medieval epics. Based very loosely on the Battle of Roncevaux Pass,

it tells of how the handsome knight Roland was betrayed by another less good-looking warrior, Ganelon. Supposedly, Ganelon told the Muslims where Roland was going, and they attacked Roland and his army and killed them all. In reality, Charlemagne was in Spain to help Sulayman al-Arabi, the Abbasid governor of Barcelona, against the Umayyad emir of Cordoba, and the attack on Roland was carried out by Basques and without Ganelon's aid, but it's more convenient to blame it on evil Muslims. 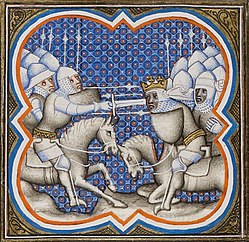 Roland and the good Christian knights take on the evil Muslims. Can you guess which side is which?

Other legends concern Charles's wars against the Moors in Spain. Supposedly St James the Greater, later the patron saint of Spain, appeared to him in a vision. Charlemagne attacked the northern city Pamplona for two pointless months, until he prayed to God and the city's walls fell down. This is almost certainly borrowed from the story of Joshua at Jericho. He is also reputed to have captured Zaragoza and given the Muslim inhabitants the choice of converting to Christianity, hanging, or burning.

Eventually, the legends surrounding Charlemagne became a substantial body of fantasy fiction. Sorceresses, giants, and other fantastic elements were added to the legends originally centered on conflicts of Christians vs. Muslims. These legends inspired Italian poets such as Matteo Maria Boiardo.

whose epics featuring the hero Orlando, the Italian form of Roland, in turn supplied plots to many operas and other entertainments through the eighteenth century. Edmund Spenser's The Faerie Queene

belongs to the genre as well. Characters and incidents from this material appear in many Baroque and Classical operas, including Handel's Orlando (1733), Ariodante and Alcina (1735), as well as Haydn's Orlando paladino (1782).

Interest in the genre tended to diminish over the course of the 19th century; the basic Christian triumphalism of these legends was increasingly out of step with the times. In England, the more native Arthurian legends were perceived as free of this baggage, and were often given romanticized pagan interpretations, following the suggestions of folklorist Jessie Weston.

Few contemporary fantasists have sought to update the material; one exception is Poul Anderson,

whose Three Hears and Three Lions incorporates the legend of the paladin Ogier the Dane.

He is connected with the Holy Lance or Spear of Destiny that had once pierced Jesus's side. One story says that he carried it through 47 battles before dropping it and dying.[7] Similar tales are also told about a later Holy Roman Emperor, Frederick I Barbarossa. The imperial honors of the Holy Roman Empire, kept at Vienna, were reputed to include the Lance, though most stories suggest it was acquired in the 10th century by Otto I the Great, well after Charlemagne.[8]

Other wackier versions of grail lore link the Merovingian dynasty of Franks with the bloodlines of Atlantis, King Arthur, ancient Troy, and the descendants of Jesus with Mary Magdalene. Charlemagne (one of whose wives was Merovingian) carried the spear with him all the time, receiving clairvoyant powers which he used to discover the burial place of St James in Spain.[9]

Although ostensibly defeated by the Saxons, who took the spear, Charlemagne is in reality only sleeping and will rise again.[9] Frederick I Barbarossa is sleeping in the same mountain, along with Frederick II, Constantine I, John III Doukas Vatatzes, Merlin, Bran the Blessed, St John the Evangelist, Csaba the Hun, King Harold of England, Vytautas the Great, Gerald FitzGerald (8th Earl of Kildare), Olaf I of Norway, Tecumseh, St Wenceslas, Thomas the Rhymer, Henry the Fowler, Owain Glyndwr, Owain Lawgoch, Rodrigo of Spain, William Tell, the 12th Imam, Vlad the Impaler, Napoleon Bonaparte, and Emperor Norton.[10] Charles's resting place is sometimes said to be a well in Nuremberg where his beard grows through the stone table on which he rests, or the hill of Odenberg in central Germany, or Untersberg in Austria. "When his beard has flowed to the last corner of the table, the end of the world and the Last Judgment will have arrived."[11]

Charlemagne has become a meme in the community for the medieval dynastic strategy game Crusader Kings II because his dynasty, the Karlings, somehow manage to get everywhere and mess up pretty borders wherever they go. Thanks, gavelkind.

Napoleon was one of many leaders to have Charlemagnish desires to rule all of Europe. He even had himself crowned Emperor by the Pope, and tried to get his hands on the Holy Lance in Vienna.

Hitler was an admirer of Charlemagne in some ways, though he felt the Frank didn't go far enough east, while Himmler hated Charlemagne for conquering the Saxons. Hitler's Third Reich was styled after the original Reich, and he had the imperial regalia of the Holy Roman Empire brought from Vienna to Nuremberg.[4] Hitler and other senior Nazis built homes at the Obersalzberg, traditional resting place of Charlemagne near Berchtesgaden.[12]

Badge of the Charlemagne regiment.

The 33rd Waffen Grenadier Division of the SS Charlemagne (1st French) or Charlemagne Regiment was a group of French volunteers who fought on the German side in World War II. Their name and badge represented the union of France and Germany in Charlemagne's empire. While their numbers ranged from tens to thousands, they served in several capacities on the Eastern Front in battle and as occupiers, before being one of the last units to fight in the Defence of Berlin. A few were shot after the war by the French as well.

The name has been referenced more recently by French far-rightists.[13]

The Charlemagne Prize is awarded by the German city of Aachen (burial place of Charlemagne) to those contributing towards European integration. Past winners include Winston Churchill, Tony Blair, Bill Clinton, Henry Kissinger, Konrad Adenauer, Edward Heath, Robert Schuman, Václav Havel, Angela Merkel, Juan Carlos I of Spain, Pope Francis, the Euro, and the People of Luxembourg (yes, all of them).

Some rather eccentric people believe that this proves that the European Union is an attempt to re-impose German imperial rule over Europe, and point out that many of the prize's founders were former Nazis, such as Aachen textile merchant Kurt Pfeiffer and German philosopher Peter Mennicken.[14]

Everybody of European origin is descended from Charlemagne. This is based on statistical analysis by Joseph Chang, who reasoned that if you went back 40 generations to Charlemagne's time you would have a trillion ancestors, but the population of the world was about half a billion people, so some of them must have been really busy. In fact, there is less of a tree of life than a web, and everybody back then is our ancestor multiple times, or at least everybody who had descendents.[15] Charlemagne isn't particularly special: you only have to go back about 600 years to find a common ancestor of all Europeans.[16]

See the main article on this topic: Heavy metal

, a decendant of good ol' Charles, recorded a symphonic metal concept album about Charlemagne in 2010, Charlemagne: By the Sword and the Cross, with a 2013 sequel Charlemagne: The Omens of Death.[17]