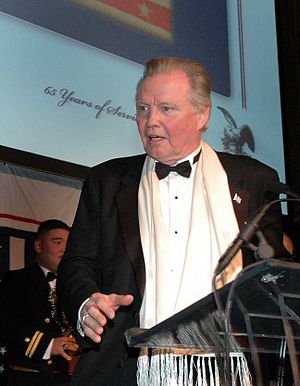 Although his acting skills cannot be disputed, Voight is one of the dumbest celebrities there is. An anti-war, counter-cultural lefty in the sixties and seventies, he later converted to Catholicism and joined the Dark Side of the Force. In 2007, on Bill O'Reilly's laughable excuse for a show, he chastised anyone with enough brainpower to see George W. Bush as the abysmal failure that he was. Voight defended the inept President, saying he he had a heavy heart to hear people say "quite unthinkable" things about Bush. You know, things like Bush's insistence on driving up the national debt, his using 9/11 as pretext to start a war in an oil-rich nation, his blind eye to America's crumbling healthcare system, his inability to catch Bin Laden, his ignorance to the reality of climate change, his refusal to contribute much-needed funds for stem-cell research, etc. In other words, Voight must have had his head up his ass the whole time, not only for chastising people because they were exercising their democratic right to free speech, but for defending the most incompetent President since James Buchanan. But Voight wasn't done there. After defending Bush, he turned to slandering Nancy Pelosi and slandering the Democratic presidential candidate Barack Obama. [2]

In a screed published in a Neocon rag known as The Washington Times in July 2008, Voight went on a paranoid nonsensical rant about how Obama would create a socialist nation and that America would be made weaker with his election. Not only did Voight provide no basis for these outrageous claims, he again failed to acknowledge the fact that Bush had already made America weaker and unpopular around the world. Voight continued his whining and bitching, complaining that CNN (that's right, CNN) was being partisan in their reporting of the 2008 Presidential debate between Joe Biden and Sarah Palin. [3]

In 2009, with his acting career in the toilet, he clearly became the GOP's unofficial spokesman, slandering Obama wherever he went, while singing the praises of Ann Coulter, Glenn Beck, Michelle Malkin, Sean Hannity and blowhard Bill O'Reilly. In August, he said President Obama was taking away "God's first gift to man, our free will" simply because Obama wanted to insure the uninsured. In November he asked a crowd of knuckle-dragging teabaggers a question about whether Barack Obama had received "20 years of subconscious programming by Reverend Wright to 'damn America'". ABC's Cokie Roberts called Voight's performance "cringemaking". She was absolutely right. Even conservative columnist George Will condemned Voight's disgraceful actions. One certainly cannot blame Angelina for wanting nothing to do with this clown.

In 2016, the inevitable happened and Voight has gone on a Super PAC bus tour in support of Donald Trump.