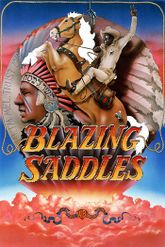 The movie poster for Blazing Saddles[note 1]

Blazing Saddles is a 1974 movie directed by Mel Brooks.

Brooks was aided by four other writers, including comedian Richard Pryor,

in an unusually chaotic screenwriting process. The film has often been misunderstood by critics, for example as a simple burlesque,[3][4] but it has also been an audience favorite.[5] Despite its broad and vulgar humor, frequent sight gags, and use of racist slurs, Blazing Saddles does have a serious message, and it expresses the message by breaking things: the western film genre, stereotypes, expectations, time and the fourth wall.

One could make a dull film that says 'racism is bad', or one could make an "unapologetically politically incorrect [film that] also skewers nearly every western trope listed on" TV Tropes[6] that became a blockbuster and was eventually inducted into the US National Film Registry.[7][8]

The basic premise for Blazing Saddles is that it is set in the year 1874, but also in the year 1974 at the same time, with cultural references from 1974 drifting into the dialogue of the 1874 setting. This works as a plot device because 1874 was towards the end of the Reconstruction era (1865-1877) as well as firmly within the so-called Robber Baron era

(e.g. predating the first US antitrust law by 16 years

Blazing Saddles was not just the first Hollywood film to extensively use the slur 'nigger', but the film needed to do so to succeed.[10] It did so in a seemingly gratuitous but actually not-at-all gratuitous way, so as to make the comedy work by showing the "ridiculous backwards thinking that is born out of racism".[8] The CEO of Warner Brothers, Ted Ashley, after seeing a screening of the film told Brooks to cut all instances of the word from the film as well as to make other cuts, but they stayed in because Ashley did not know that Brooks' contract gave him final-cut rights.[11]

With notable exceptions, racist slurs are confined to villainous characters or at least to characters who are acting villainously. Exceptions are:

Racism is portrayed in a class-based way: the foremen, overseers and the townspeople are portrayed as vulgar racists, freely using slurs and otherwise openly expressing their racism, whereas the attorney general and governor are "genteel racists"[12] (also known as "aversive racists"[13]) who literally cannot bring themselves to say the word "nigger" but who otherwise express racism and whose racism depends upon the manipulation and exploitation of the vulgar racism of others.

Though the West is portrayed in a broad or cartoonish way, it is in some ways more realistic than other Hollywood westerns due to people's frank and crude speech and overt racism. Not unlike the Ig Nobel Prize, Blazing Saddles works by first making people laugh, then making people think.[14] The use of multiple breakings of the fourth wall in Blazing Saddles is not just an attempt at humor but also an attempt at audience engagement[15] — making people think after they laugh. Similarly, the breaking of the time barrier — the frequent references from the 1874 setting to 1974 and other time periods — serves both as a comedic element and as a way of signalling to the audience an unstated 'Hey, look here. Things haven't changed so much.' In this regard, Blazing Saddles borrows directly from the two primary techniques of anti-fascist playwright Bertolt Brecht's

Unusually, there is a shadow plot line in Blazing Saddles that is only sometimes obvious. There are several references to German militarism in the film that advance somewhat chronologically:

So, the Nazi shadow plot in Blazing Saddles progresses with regard to German militarism: from relative innocence, to humor and cooptation, to crime, to guilt and judgment, and finally to historic portrayal and mockery ("They lose me right after the bunker scene."). The shadow plot breaks the time barrier in a more sustained way, pushing the audience to think about racism and crimes in Nazi Germany simultaneously with racism and crimes in the western United States of the 1800s.

Bethany Hegener, writing for Medium, has noted the offensiveness of rape jokes in the film.[18] Blazing Saddles has two or three rape 'jokes' (1, 2 and 3), and arguably rape jokes are never funny.[18] The jokes do establish character however, showing just how awful the villainous characters are who make these statements. So, if one is going to criticize a work of fiction,[18] one should first understand how fiction works, which Hegener does not seem to understand. To state the obvious: writers/directors/actors do not usually subscribe to every word that a character states. Actors have to read their lines whether they agree with them or not. To make good fiction, writers have to make villains, heroes and ambiguous characters. In Blazing Saddles, Burton Gilliam actually had difficulty saying the word 'nigger', particularly to Cleavon Little whom he liked. Cleavon told Burton:[19]

Also, one should not quote mine, as Hegener did.

Hegener has claimed that the Lili von Shtupp is exemplary of the objectification and sexualization of women in the film,[18] but it is noteworthy that Lili has agency: she is sexually liberated and chooses her sexual partners. Furthermore, during her stage show, she shows that she can take care of herself by mockery and by physical force: kicking a cowboy's feet off the stage and kneeing an aggressive cowboy in the crotch.

Greg Hernandez, writing for Gay Star News, has stated that the portrayal of gay men is stereotypical[20] and — unless one looks carefully — not redemptive unlike how racism is portrayed. However, at five brief points there are indications otherwise:

The second and third instances could be described as foreshadowings of the groundbreaking gay cowboy film Brokeback Mountain.

The overall theme of "The French Mistake" scene can be read as coming out of the closet. The music, belonging to the dancers, shortly precedes their appearance and continues through the melee, indicating that the dancers have actually invaded the cowboys' space, rather than the other way around.[21]:220 In the second instance, both the dancer and the cowboy exit what could be described as a metaphorical closet, as the leave the passageway.

Notably, Brooks' intention was not to laugh at gays: he has claimed to have vetted his humor with his gay friends,[note 3][22][21]:218-219 which is not to say that it is inoffensive or that all gays will find it funny, but rather that Brooks does at least have some cultural sensitivity.[21]:219 "Within the context of Blazing Saddles, gay humor can be read as either pure outrageousness, or as an analogous conterpart to a steady stream of racist language designed to attack racism as stupidity."[21]:219

One of the greatest conservative movies of all time![edit]

The basic problem with conservatives claiming that Blazing Saddles is a conservative film, rather than an anti-racist film, is that it relies on conflating political correctness with liberalism and political incorrectness with conservativism. Political correctness is an ideology-based concept that varies by ideology, for example Conservapedia has nearly completely banned the use of certain terminology (e.g., the near-total ban of the acronym 'BCE' and the word 'fuck', the latter excepted in rare cases when quoting people they hate[23]) and the banning of certain concepts such as support of evolution (despite it being supported by the Catholic Church since 1950). As the film itself demonstrates, one can use 'politically incorrect' terminology in the service of a larger lesson.

Conservapedia thinks that Blazing Saddles is one of the "Greatest Conservative Movies",[24] and Andrew Schlafly agrees.[25] The reason given is, "A politically incorrect western, something liberals are sure to despise."[24] Apparently, either no one at Conservapedia has seen the film, or more likely, no one there has understood it. Considering that the list also includes "1984," "Fight Club," and "Parasite" (no, really), it's entirely possible that it is the latter. Putting the word 'nigger' in a film does not automatically make it conservative (or liberal or anything else), otherwise this very webpage that you are reading now would also be conservative.

John Nolte of Breitbart has claimed in a 2014 review, that all copies of Blazing Saddles will eventually be burned by the left wing.[26] Credibly, Nolte did enjoy the film and did understand that racism was the major theme of the film.[26] In a separate piece, Nolte also listed ten non sequiturs reasons why he thinks that the film will eventually be banned by liberals:[27]

Ironically, Nolte's writing 'n***er' rather than the word itself, is self-defeating in his argument because he either self-censored or was censored by the far-right Breitbart, bringing him down to the level of Governor Le Petomane's genteel racism, and is a form of political correctness itself. Furthermore, the idea that using a euphemism for a racist term somehow makes one not racist falls into the "mistaking the map for the territory" fallacy.

Taken as a whole, Nolte's prediction seems to assume that liberals are some sort of monolithic organization because the first eight reasons given are concerning individuals or organizations expressing their free speech rights to criticize other people's particular expressions of free speech rights. Reason number nine, Citizens United, concerns whether a corporation is a person and whether money is a form of speech. Reason number ten deals primarily with whether inflammatory speakers should be allowed to speak on college campuses. The ACLU has in fact often defended free speech on campuses,[29] despite many conservatives' belief that the ACLU is a liberal bugaboo.

[26] This is patently false since the Blazing Saddles mocks:

Eric Blake, writing for Western Free Press, has written that "This is one of those films that's Conservative By Default. That is, it's effectively become Conservative over the years, as the Left, to be blunt, has gotten more and more insane."[30] Blake wasted his time getting a "Bachelor's in Political Science and a Master's in Film Studies" from the University of South Florida,[note 4] otherwise he might have known better about writing this drivel.[30] Western Free Press is a self-described "news and opinion site for conservatives and libertarians".[32]

Blake states that Lamarr is a "big-government guy through-and-through — assumes like a Lefty that the racism of the townspeople will be such that they just won't find it in themselves to actually accept a black sheriff."[30] Though Lamarr is Attorney General for an unnamed podunk state, where is the big government? He has no visible government employees of his own; Taggart, his henchman, is a railroad foreman, not a government employee. Lamarr even has to ask for favors (1, 2) from the hangman, who conveniently operates just outside his office. The townspeople do in fact reject Bart as the sheriff from knee-jerk racism and nearly murder him outright, but are only convinced to accept Bart after he rescues them from Mongo, who had foolishly been sent by Taggart.

Based on Crowder, Blake's argument is basically that since the film is politically incorrect, it is therefore conservative: a conflation of the two concepts. Although Blake also understands the main theme of the film — racism — and that racists can perhaps change their views,[30] what he doesn't understand in the film is:

Like Breitbart, either Blake or Western Free Press self-censored and used 'n——r' rather than the actual word. If one cannot even name the thing that is wrong to say in a gratuitous context, one's argument if failing.

If you've never seen Blazing Saddles before, you should find a copy and watch it first. The videos do not show the whole movie, and the text (obviously) leaves out the excellent camerawork and editing as well as actors' nuance. Also, it goes without saying, if you have to explain a joke, it isn't funny. The purpose of the annotations below is to explain some of the humor and some of the historical context.

The opening scene shows most of the basic themes that follow in the rest of the film: the building of the railroad (and implicit robber baronism), racial slurs, racist class structure, the sly subversion of the African American laborers, and the duping of dimwitted white overseers and foremen.

The Ballad of Rock Ridge[edit]

Marlene Dietrich in The Blue Angel