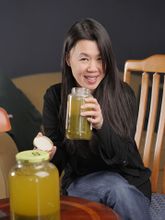 Jillian Mai Thi Epperly holding something that she expects you to drink.

Jilly Juice is essentially, cabbage water left in a warm room for 3 days after a dangerous amount of salt is added. Jilly Juice is the creation of Jillian Mai Thi Epperly, a woman from Ohio, who states that she cured herself of chronic illnesses and no longer suffers from allergies and common ailments because of the juice.[2][3] Candida is a fungus that naturally occurs in the gut, but Jillian claims that it is actually a gut parasite and the root of all human disease, which can be cured by drinking a gallon of the juice every day, curing basically ailment or condition, including (as stated by the creator) autism, cancer, HIV, and Down syndrome. In addition, she claims that the gay and being transgender are caused by mutations in the reproductive system, which her juice can also cure,[4] and the juice can also cause you to regrow lost limbs and organs and live to be over 400 years old. In reality, Jilly Juice can do none of these things. These wild claims have attracted the support of tens of thousands of followers on Facebook, as well as substantial negative attention from the Better Business Bureau.[5]

She provides no evidence to back up these claims except for endless piles of woo. Interested customers may, however, explore more by paying her for consulting services on a "members only" part of her webshite.

Critics counter that Epperly's juice, when consumed at the recommended dosage of a gallon a day, causes severe reactions and side effects including nausea, headaches, dizziness, fever (all dismissed as "feeling the healing"), and explosive blasts of diarrhea (which are affectionately nicknamed "waterfalls", and the creator denies that this is real diarrhea).[1][6] Nasty side effects of consuming the briny juice are likely, in part, due to salt poisoning.

In 2017, Bruce Wilmot, suffering from advanced pancreatic cancer, discovered Epperly's snake oil site on Facebook, and desperate for a cure, brewed up several gallons of the stuff and began "juicing" frantically. Wilmot's daughter stated that he drank the juice to the exclusion of everything else and became emaciated before dying shortly thereafter.[1]

After receiving multiple complaints about Epperly's activities in marketing her brine in 2018, the Ohio state Attorney General opened an investigation into the matter.[3] In what can be described as either incredibly stupid or clueless, Epperly released a remarkable pseudoscientific screed in response to a formal request from state authorities.[8][2] In October 2018, The U.S. Federal Trade Commission and the Ohio Attorney General told Epperly she must remove all unsubstantiated claims from her website and any other advertising materials.[9] Epperly has also suffered a temporary ban from Facebook for violating the platform's hate speech rules by ranting about homosexuals.[10]

Once you have made Jilly Juice, it is recommended to drink two cups a day and eventually build yourself up to drinking a gallon per day. A gallon of Jilly Juice contains about 28,008 milligrams of sodium, while the recommended daily amount is 2,300 milligrams. Her website has a rather… interesting FAQ section, which is a mix of vague claims (which she admits are deliberately so, in order to cover herself),[11] interspersed with various basic facts about water and salt, which have been cut & pasted from slightly more reputable sites; this is done in a desperate attempt to show that she's got the slightest idea about the science of nutrition or how her magical protocol is supposed to work.

Of particular interest is her mention of "symptoms", where she explains that you should be happy that you're experiencing intense diarrhea, cramping and other signs that you would normally take as a hint to stop doing whatever the hell it is that caused them in the first place. Good nutrition makes you shit waterfalls, didn't you know that?[12]

No less an august (cough cough) personality than Dr. Phil McGraw has called Jilly Juice a dangerous scam,[13] proving that even Dr. Phil can be right on rare occasions. Additionally, prominent YouTubers Jeff Holiday, Pyrocynical, PewDiePie, and Myles Power, as well as OpenYourMind Radio have recently done segments about the Jilly Juice scam and cult.