From RationalWiki
(Redirected from Tesla)
Jump to navigation Jump to search 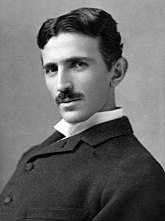 Nikola Tesla
Were you looking for Elon Musk's Tesla Motors?

Nikola Tesla (1856–1943) was an electrical engineer whose greatest accomplishments were paving the way for practical widespread distribution of electricity by way of the development of alternating current, the Tesla coil (although they were really discovered by Michael Faraday and demonstrated by Callan 20 years before Tesla was born), and having a hand in the creation of radio alongside rivals Guglielmo Marconi and Reginald Fessenden. Though he originally worked for Thomas Edison, they had a falling-out over alternating current and Tesla left to work for Edison's competition. Tesla was a Serbian-American who was born in modern day Croatia.[1] He was an Austrian citizen until becoming naturalized in the US. He never held Serb, Croat or Yugoslav citizenship, which makes nationalist debates about his nationality both endless and especially pointless.

Tesla was among the most prolific and noted stache' wearers scientists of his time, but made some very poor financial and legal decisions, allowing others such as Edison and George Westinghouse to register patents for his inventions, and he died in relative poverty. The SI unit measure for magnetic field strength, the tesla, which is equivalent to a Newton per ampere-meter

is named after him[2] despite the fact that he played no role in the development of electromagnetism. Tesla was also the object of a kind of New Age cult after his death in 1943. Tesla, like Democritus, was convinced that atom is the smallest indivisible unit of matter, and a believer in aether despite the Michelson-Morley experiment.

Cranks had already been attributing either divine or extraterrestrial features to Tesla during his lifetime; he wrote in his autobiography jokingly that people can freely call him a monster from planet Venus. 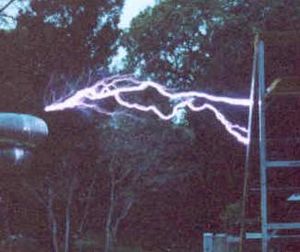 A Tesla coil in action.

While Tesla's major accomplishments went a long way towards creating the world as we know it, he was also something of a mad scientist, dealing in numerous bizarre theoretical (and often unworkable) ideas, including a wireless power transmission system and, most notoriously, a "death ray." Like other pioneering scientists of his era, including Thomas Edison and William Crooke, Tesla was fascinated by the paranormal, the "spirit world" and the possibility of extraterrestrial life. He is also reported to have had various eccentricities and phobias, and it seems rather likely that he suffered from obsessive compulsive disorder.

Tesla's poorly-thought-out later ideas are much beloved of would-be engineers with little formal scientific training, and as a result Tesla's name is sometimes used as a handwave by unscrupulous or naive inventors misrepresenting their inventions.

Tesla is also a favourite figure of conspiracy theorists, and there are numerous theories revolving around him, most of which claim that his death was suspicious and followed some great breakthrough discovery or invention by him which has been kept secret ever since. In some variants, this is the "death ray"[3] he was working on; in others, some form of paranormal or extraterrestrial communication.[note 1] "The Tesla Conspiracy"[4] site claims that he had discovered the means of drawing electricity directly from the atmosphere, but that this has been hushed up by the interests of unscrupulous oil and energy companies.[note 2] While many perpetual motion fans believe he made an electric car that runs off some kind of atmospheric or environmental radiation, there's (unsurprisingly) no evidence that he ever built or even designed such a vehicle.[5] Further fuel was added to the conspiracists' metaphorical fire when the US government took control of Tesla's papers after he died.[note 3]

Another general trope is the notion that Tesla has never received the credit due to him, with his name somehow being suppressed by "the scientific establishment". While it's true that Edison was a fairly unethical businessman and a bit of a douchebag towards not only Tesla but many of his contemporaries[note 4], and even the patent office now admits that it was Tesla, and not Marconi, who invented the radio, the conspiracy claims go far beyond this. Quite how this tallies with mention of him in every physics textbook is not clear, never mind the SI unit of magnetism being named the "tesla" in his honour, as well as an electric car company and a hard rock band also being named after him.

Tesla's obsession with the number three and fear of germs suggest that he suffered from chronic symptoms of OCD. He was obsessed with cleaning the dining table, and he also had a fear of round objects. He also had tendencies to avoid shaking hands with people. On the one hand, Tesla's alleged OCD caused him to isolate himself from people; on the other hand, it may have helped him with his eidetic memory.[6][7][8] He also fell in love with a pigeon, so there's that.[9]