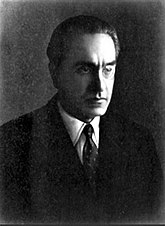 Giulio Cesare Andrea Evola, known to the English-speaking world as Julius Evola (1898–1974), was an Italian political philosopher. He has been given the title 'baron' by some, but he never referred to himself as such and was most certainly was not one, nor was he a noble.[1]:54 His philosophy is "considered one of the most radically and consistently antiegalitarian, antiliberal, antidemocratic, and antipopular systems in the 20th century",[2]:84 and as such, he is often considered an important pillar of neo-fascist thought, though Evola himself preferred to call himself a radical traditionalist, seeing most of the fascist movements and governments of the time, especially in Italy, as tepid bourgeois frivolity (the fascist authorities in turn saw him as a crank). The alt-right and neoreactionary movements, as well as the more intellectual end of neo-Nazism, are big fans.

A prolific writer, his chief works are Revolt Against the Modern World

Evola was an eclectic mystic in the traditions of Tantra, Kabbalah (despite his anti-semitism),[1]:64 hermeticism, and ritual magic, demonstrating a lifelong interest in the occult and Eastern religions, from his 1929 Introduction to Magic: Rituals and Practical Techniques for the Magus

Evola borrowed heavily from Helena Blavatsky's Theosophical notion of "root races", adopting a curious notion of evolution running in reverse, in which the ancient world was filled with enlightened beings such as are imagined to have dwelled in Atlantis:

According to Joscelyn Godwin, "the basic outlines of Evola's prehistory resemble those of Theosophy, with Lemurian, Atlantean, and Aryan root-races succeeding each other, and a pole-shift marking the transition from one epoch to another".[3]:57-61 The most valuable race to belong to is the Nordic European race, because they were descended from the Arctic paradise of the Hyperboreans.

The virtue of war[edit]

Evola believed that we were now living in the Kali Yuga, a dark age of materialism and spiritual degeneracy. As usual, his prescription involved a "spiritual rebirth" through submission to unreasoning tradition. The Italian philosopher of history Giambattista Vico provided Evola with the concepts of primordial heroic law, "natural heroic rights" and the meaning of the Indo-European Latin term vir[Note 1] as indicative of "wisdom, priesthood and kingship." Matriarchy and women's rights were evidence of regression, while patriarchy is a progressive force.[4]

Given this, it is unsurprising that he romanticized war. In Metaphysics of War,

he held that the political goals of war are mostly irrelevant; what made war such a good thing is that it aided the warrior in his path of spiritual self-realization. According to Evola, pacifism was materialistic, and made people comfortable and weak.

Sex: hold on to your semen[edit]

Evola was a devotee of Tantric and similar sorts of sex mysticism. He believed that it is important for men to hold on to their semen as this re-energizes them and moves them towards self-mastery. He approved of homosexuality in the context of Platonic relationships, while saying that actual same-sex acts were materialistic and led to a fall from grace.

Evola held both Christianity and science in contempt, seeing both as supplanting classical virtues in favor of a materialism obsessed with "progress". Christianity had replaced the pagan gods of old with one who demanded obedience and submission, while science dismissed the spiritual world altogether. In their place, he called for a restoration of ancient Roman paganism and aristocracy. In his 1928 book Pagan Imperialism, published months before the signing of the Lateran Treaty establishing the Vatican City as a sovereign state, he attempted to dissuade Benito Mussolini from aligning with the Roman Catholic Church, fearing that it would compromise and derail the fascist "revolution" in Italy and turn it into just another venal, worldly government. This got him denounced by both the fascist state and the Church, and so he formally, tepidly renounced the book, though similar themes would recur throughout his later work.[7]

Julius Evola conflated two different Shia Muslim sects together, mistakenly believing that the Nizari Ismaili Assassins believe in Twelve Imams which is a belief of the Twelver Shia (ithna ashari) sect.[8] In Julius Evola's discussion of the Crusades in "Metaphysics of War: Battle, Victory & Death in the World of Tradition", he claims the war was between the Arab and European races leaving out the fact that the main opponents of Crusaders were Turks like the Seljuqs, Zengids and Bahri Mamluks.[9] 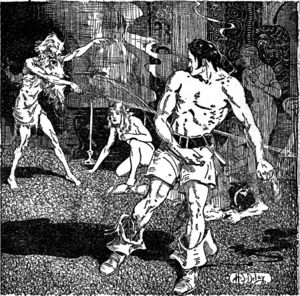 Conan the Barbarian, the kind of guy who ought to be in charge. John Milius would be proud. Art by Harold S. De Lay for Weird Tales.

Evola's politics flow from his mystical attitudes towards manliness and spirituality; he held that politics should be an act of spiritual discipline, and should look upward and beyond the self. He opposed democracy as a sort of modern "demagogic" politics. Its materialism is a result of the inversion of the natural order of things, in which disciplined warriors are in charge. He admired the Hindu caste system, Plato's Republic, and the medieval European social order as systems where people who concerned themselves with merely materialistic stuff like food and other commodities were subjugated to their betters in spirituality and prowess.

Like Oswald Spengler, he believed that decadent times had come when commercial interests became more powerful than religious or military interests in society. The current order, instead, places weak and materialistic merchants and businesspeople on top rather than the warriors or priests. He writes, "Opposite to the 'soldier' was the type of the warrior and the member of the feudal aristocracy; the caste to which this type belonged was the central nucleus in a corresponding social organization. This caste was not at the service of the bourgeois class but rather ruled over it, since the class that was protected depended on those who had the right to bear arms."[10] He hated both capitalism and Marxism and saw them as two sides of the same coin, both subversive, materialistic ideologies that hollowed out traditional cultures, elevated economic gain as the only goal worth pursuing in life, and made it impossible to achieve any higher ideals, and as a result, he maintained that right-wingers who supported capitalism were merely letting the left set the terms of the debate and were therefore doomed to failure. He held a degree of sympathy for Third World countries that hadn't yet industrialized, seeing them as the only ones whose cultures hadn't been consumed by the machine of modern economics.[11] His economic views wound up influential on Third Positionists, with Roberto Fiore, co-founder of the Italian group Terza Posizione, known to have had connections with him.

Evola was also a fierce anti-Semite. In many of his writings, he blamed the Jews for fostering the rise of the modern capitalist society and the spread of materialist values, and felt that anti-Semitism was a necessary part of any "racial rebirth". He wrote an introduction to an Italian translation of The Protocols of the Learned Elders of Zion, saying that he wasn't concerned with whether the actual text was authentic or a fabrication — to him, the essence of what it was saying was true, and that was all that mattered. His anti-Semitism was purely cultural, however, hating them not as a biological race or as "Christ-killers" but as the exemplars and leading promoters of the decadence of modernity, in what he called razzismo dello spirito (racism of the spirit). He believed that one could be ethnically Jewish but still have an "Aryan" soul, citing Otto Weininger and Carlo Michelstaedter as examples of the "good ones", while in the other direction, hatred of the Jews informed his hatred of the British Empire, describing the "Empire of Shopkeepers" as a mercantile, materialistic abomination that had internalized Jewish values from top to bottom and stood as an exemplar of everything he despised.[12]

See the main article on this topic: Fascism

While Evola's writings were hugely influential among post-World War II fascist sympathizers, Evola himself opposed fascism on a number of points. He never belonged to any capital-F Fascist parties, and in fact, he and the Fascist Italian government had several bitter disagreements that saw some of his work censored. Evola's anti-fascism was, however, not because of its xenophobic and warlike tendencies, but because he felt it was not spiritual, ascetic, or enlightened enough to fulfill the purpose of restoring a warrior wonderland. He felt that fascism was too preoccupied with mass movement politics, petty nationalism, and demagoguery to serve as a true font for such restoration, stating that, far from being a traditionalist alternative to liberal democracy and capitalism, it (especially in its Italian form) was a "laughable revolution" that copied most of their qualities and merely repackaged the bourgeois values that it purported to oppose. In short, Evola was a guy who thought that the fascists didn't go far enough.[13] He did, however, see some glimmer of hope in fascism's racial politics and militarism, and as such, he attempted to steer Fascist Italy in a direction more in line with his radical traditionalist views. Benito Mussolini is known to have read his book Sintesi di Dottrina della Razza (Synthesis of the Doctrine of Race), personally meeting with Evola to praise it for presenting a uniquely Italian/Roman form of racialism distinct from that promoted by Nazi Germany. With Mussolini's backing, in 1941 Evola published a minor journal called Sangue e Spirito (Blood and Spirit) that further expounded upon such views. After the war, he concluded that Mussolini's failure to fully embrace his ideas was largely responsible for the failure of the fascist "revolution".

Whatever his disagreements with Mussolini and Italian fascists, Evola proved far more amenable to Nazi Germany, particularly the Waffen-SS. He was a huge fan of SS chief Heinrich Himmler, whom he met in person,[14] and actively worked for the Sicherheitsdienst, the intelligence agency of the SS, during World War II.[15] He regarded the SS as a model "racial elite," with its hierarchy, its rituals, its belief in "transcending" humanity, and its ethical requirements, writing that "[w]e are inclined to the opinion that we can see the nucleus of an Order in the higher sense of tradition in the 'Black Corps.'"[16] That said, the SS was suspicious of him; their dossier on him described him as a "reactionary Roman" who planned on forming a secret society to subvert Nazi rule, and concluded that he should be provided with no support.

Evola's post-war writings indicate that he viewed fascism as a failed experiment, with nationalism having been its fatal flaw, and instead called for the creation of a pan-European superstate organized under "organic, hierarchical, anti-democratic, and anti-individual" principles. He also focused on anti-Americanism, seeing the spread of American culture through Western Europe as a greater threat than the Red Menace, and endorsed Francis Parker Yockey's book Imperium even if he felt that Yockey wasn't dreaming big enough when it came to implementing his proposals.

In 1951, the Italian government put Evola on trial on a charge of attempting to revive fascism. Evola was acquitted, since he was never a member of any fascist party or movement, and his actual writings were critical of fascism. This in spite of the fact that, during his trial, Evola, while denying being a fascist, instead referred to himself as… a "suprafascist."[17]