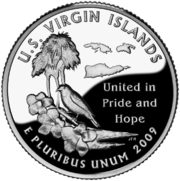 The United States Virgin Islands, formerly the Danish West Indies, is a group of islands located in the lesser Antilles, east of Puerto Rico. There are the three main islands of Saint Croix, Saint John, and Saint Thomas, and 50 much smaller ones. They are a part of an archipelago collectively called the Virgin Islands, alongside the British Virgin Islands

to their east and the Spanish Virgin Islands (which are considered a part of Puerto Rico) to their west. They changed hands a number of times throughout history, but were brought into U.S. hands after they purchased the islands from Denmark. Yes, Trump's dream of buying Greenland isn't 100% unprecedented.[note 2]

The U.S. Virgin Islands were first settled somewhere around 1000 BCE. A number of ethnic groups, including the Ciboney

, had inhabited the islands. The Kalinago, also known as the Caribs

, were a later arrival. They had a fierce reputation, and destroyed numerous Arawak villages; they are believed to have caused the Arawak population to decrease from a few million to a few thousand. But even they were not prepared for what would come next.

Christopher Columbus was the first European to visit these islands on his second voyage from 1493-1496. He named them "Santa Úrsula y las Once Mil Vírgenes" after the legend of Saint Ursula

and the 11,000 virgins. When Columbus first landed on the islands, it led to a battle with the Caribs, and he later kidnapped several Arawaks to act as guides to other islands. Afterwards, the islands were settled by Danish, Dutch, English, French, and Spanish settlers, with various countries having competing claims over the islands. The settlers tried to convert the native population and enslave them to work on plantations. This led to most of the native population dying, including the rest of the Arawaks.

The U.S. Virgin Islands would prove to be an important location for the trans-Atlantic slave trade, which began in 1673. Slaves were often forced to work on tobacco, and later sugar, coffee, and cotton plantations. In 1733, a group of slaves revolted and took over the island, which lasted six months. The Danish called on the French to help, and thus began a period of Danish control over the islands. Another, nonviolent slave revolt occurred in 1848, when thousands of slaves marched to the capitol and threatened to burn it down, the governor was forced to free the slaves.

During World War I, Woodrow Wilson was fearful of potential German influence in the Caribbean, which led him to intervene in Haiti and the Dominican Republic. It led to the Americans purchasing the "Danish East Indies" in 1917 for 25 million dollars (over half a billion dollars in today's money), and ten years later, it became an official unincorporated U.S. territory.

The U.S. Virgin Islands could rival DC for the most overly Democratic area of the United States, to the point that Republicans often don't even bother to run, likely due to the islands' 75% black population. Their legislature contains thirteen Democrats, two Independents, and zero Republicans. Like other U.S. territories, the U.S. Virgin Islands can't vote for President, with their only influence on the process being during the primaries, and only have a non-voting delegate in the House. In 1993, the residents voted overwhelmingly (81.6%) to remain a U.S. territory, although the voter turnout was low at 27.49%. Whether public opinion has shifted since that time is unclear, regardless, the U.S. Virgin Islands are unlikely to become a state any time soon.

The dark side of the Virgin Islands[edit]

The Virgin Islands are a well-known tax haven. Jeffrey Epstein was its most infamous resident, having set up shop there so he would pay less in taxes.[2] He also used his residence there to rape and traffic girls as young as 13.[3]