From RationalWiki
(Redirected from Founding fathers)
Jump to: navigation, search

The Founding Fathers are a loosely defined group of teenagers[3] men who were instrumental to the creation of what we now know as the United States of America. Ohio senator (and future president) Warren G. Harding coined the phrase during his keynote speech at the 1916 Republican National Convention.[4] In general, they include the signers of the Declaration of Independence, and those who worked on drafting the U.S. Constitution and its Bill of Rights eleven years later.

America takes its Founding Fathers very seriously, and in many ways to an extreme level. Often to the point where one would say "the Founding Fathers would be ashamed of you" for whatever your politics may be, while rarely actually researching their beliefs and opinions and adapting one's own to match theirs. Assuming they would agree with one's already established beliefs is so much easier — eerily similar to the question, "What would Jesus do?" Unfortunately the left and right are equally guilty of this. The mythologization of the Founding Fathers forms an important aspect to American exceptionalism.

Who is a Founding Father?[edit] 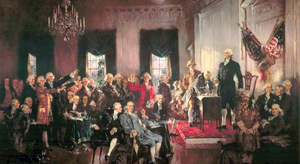 Some Founding Fathers signing the Constitution ...wait, what's that in the back?

There are over 130 people who can be considered to be among the Founding Fathers of the United States, and nobody has heard of most of them (but God help you if you run into one of their spawn at a party in the Hamptons).[5] According to the guy everyone agrees is the best historian on the subject, the seven most important founding fathers were Benjamin Franklin, George Washington, John Adams, Thomas Jefferson, John Jay, James Madison, and Alexander Hamilton.[6] So nobody else mattered.

These seven people were particularly instrumental in the shape the country was to take, but many of the 126 other official Founding Fathers did and said a lot of important things as well.

And who says it's all about the A-List? There were thousands of people across the country who are not officially considered Founding Fathers yet who had great influence. James Iredell is not an official Founding Father but he's hardly just some Carolina cracker. Iredell sat on the very first Supreme Court and wrote the lone dissent in Chisholm v. Georgia, disagreeing with Founding Father A-Listers John Jay, James Wilson and John Blair. Everyone was so mad at the A-Listers that the country just two years later ratified the Eleventh Amendment overturning their ruling. Iredell helped organize the court system of North Carolina, and some manifesto he wrote predated the Declaration of Independence, but said a lot of the same stuff and his dissent became the Eleventh Amendment, more or less. Yet he's B-List, if even.

Citing the founding fathers is tricky with even the A-List founders and their wildly divergent opinions, to say nothing if you start to include B-Listers like Iredell.

For no good reason, here is a short list of the better known Original Daddies:

Believe it or not, there were several important founding mothers. Important ladies include:

They shared the same uncompromised beliefs about everything[edit] 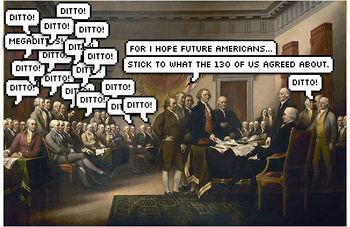 The quote above is true if you assume that these 130 people all believed the same things; that the Founding Fathers were an intellectual monolithic entity that knew exactly the effect of all their words; that no debate nor compromise was involved in the writing of the Constitution; and that wording was not purposefully vague because they could not agree on their meanings at the framing.

This line of reasoning should lead you to question why the founding fathers even felt the need for a Supreme Court (and the ability to add and repeal amendments to the Constitution), since everyone knew what the document said and meant. Simply cracking the Federalist and Anti-Federalist Papers should dispel this notion rather quickly.[9] And just a couple of examples of the divisions between the founders: The Bill of Rights itself (tacked on to please the Anti-Federalists) and the Three-Fifths Compromise. There are also the rather unsavory facts about how the founders immediately began to violate the Constitution after they had been elected into office, e.g. John Adams' signing the Alien and Sedition Acts and Thomas Jefferson's purchase of the Louisiana territory from the French.

In reality, it was just pure luck that they could stop bickering for long enough to keep the country together. The country was rallied around two sides: the Federalists and the Anti-Federalists. After the somewhat authoritarian presidency of John Adams, followed by 28 years of Jeffersonian Republicans, which caused an effective one-party state from 1812 to 1824. It was sheer luck that the country never fell apart. If it weren't for the threat of Britain and the natives which we intended to steal all the land from, they probably would've failed. So in reality, the US government back then was enough to make the modern US look like a monolithic voting bloc. In addition to this, some states had real diplomatic tensions. For example, Virginia and Ohio would've probably gotten really mad over the Ohio River.

So you've dug up some Founding Father who wrote something that backs up what you think, and this is great. Because now whatever belief you hold is shared by the monolithic Founding Fathers and you can pull out your quote to prove you are right. For example, here's a tidbit from lexicographer Noah Webster that would surprise some people:

Here's how to overcome some pitfalls. In the unlikely event somebody in earshot has read a book and says "How can you say that? These men were immediately arguing in the Supreme Court about what they meant in the Constitution!" you should say that was all just pencil sharpening, and tell them to stop with the evil liberal claptrap.

If you cite the Founding Fathers' "original intent," it's possible that someone will point out that there were Founding Fathers who thought and wrote the exact opposite things that you're claiming. History calls some of this nonsense "Federalist v. Anti-Federalist"; "Big State v. Little State"; and "Federalism v. Republicanism." To win, just say that particular Founding Father was an idiot everyone actually hated.[11] Say that "the Founding Fathers believed X and Founding Father Y wrote this in a letter" and the implication is that they all believed as Founding Father Y, whose ideas were cheered and adopted by everyone! Argument won, because you get to say, whoever you are arguing with over whatever position, that it is originalist.

Proponents of the legal doctrine of originalism often make references to these 130 men and what they thought about stem cell research, automatic weapons, segregation,[12] and the humor of George Carlin.[13] Interestingly the family values of Ben C-Note Benjamin Franklin are rarely if ever cited.

See the main article on this topic: The United States as a Christian nation

While fundamentalist Christians like to claim that all these men were devout Christians, in truth, most were deists (in the classical sense where an individual's relationship with God is impersonal), though their individual religious stances were as varied as night and day. Above all, however, they held secularist viewpoints, strongly influenced by the Enlightenment, and had strong opinions in favor of insulating religious matters from state interference — and vice versa.

Conservatives counter that no matter how unorthodox Thomas Jefferson was in regards to religion (he was, after all, the man who wrote the Jefferson Bible), he, along with the other founders, most certainly believed that God was the source of our human rights. But in that event, the word "God" becomes meaningless, because the God of Christianity (and Judaism, and Islam) grants no rights in the various scriptures. There are only bald assertions by a group of men coming out of the Enlightenment period that a vague fuzzy deist God established the rights, and this is held as a matter of unquestioned "self-evident" truth.

Other examples of non-Christian behavior include Washington, who would often get up and walk out of church rather than take Communion and who, contrary to his popular image, disappointed contemporary theologians with his lack of enthusiasm in preaching the Christian faith.[15]

At least one fundamentalist group, the Society for the Practical Establishment and Perpetuation of the Ten Commandments, recognizes that most of the Founding Fathers were not Christians in the sense that we would recognize them today. Of course, it then jumps to the conclusion that the Founding Fathers were inspired by Satan, that democracy is evil and ungodly, and that we should overturn the Constitution and replace it with a theocracy. QED.

True-blue British patriot-imperialists regarded those rash and careless enough to sign up for Independence - regardless of their undoubted intellectual accomplishments and alleged religio-moral fiber - as self-evidently[citation NOT needed] traitorous oath-breakers and disloyal criminal stirrers who fully deserved nothing less than getting strung up from the nearest tree.[16] (Which would undoubtedly have happened had not a visiting naval force of cheese-eating surrender-monkeys kept the British off the Continentals' backs by declaring war on the UK and tying up most of its army and navy overseas. Oh, and that time they saved the bacon of George Washington, the colonial so-called general, at Yorktown