Patriotic Alternative (PA) is a British far-right white nationalist group[1][2] founded by neo-Nazi Mark Collett who was formerly chairman of the Young BNP. PA is widely seen as a successor to the British National Party (BNP), now almost defunct, although PA (unlike the BNP) is currently not registered with the electoral commission. PA had filed paperwork to the electoral commission in April 2020 to become a registered political party, but their application was rejected for being incomplete.[3]

Unlike the BNP — which under Nick Griffin's leadership tried to moderate its fascist image and racist policies for public appeal (hence, it was able to win nearly one million votes in the UK's 2009 European Parliament election) — Collett has no interest tamping down the bigotry for PA; he has recently made anti-Semitic videos titled "The Holocaust - an instrument of white guilt"[4], therefore the group is not thought to be an electoral threat if it registers as a political party because of Collett's baggage as a literal neo-Nazi and the fact the group only is attracting the most extreme individuals of the far-right. Hope not Hate in a report on Patriotic Alternative notes, "PA forwards extreme policies, such as repatriation, and its members voice highly extreme views, including expressing Holocaust denial and supporting those who call for political violence."[5]

Notable individuals associated with Patriotic Alternative include Edward Dutton, Colin Robertson and Laura Towler. However, white supremacist Robertson was banned from attending future PA conferences in April 2020 after sexual misconduct allegations were made against him.[6]

On 9 August 2020, PA launched a campaign to correspond with International Indigenous People’s Day. The PA campaign included images on social media of individuals displaying the phrase 'White Lives Matter' from across the UK and some from abroad.[7]

PA is in competition with similar groups such as Britain First and For Britain. What distinguishes PA from the other two groups is Collett's Holocaust denial and anti-Semitism.[9] The other two groups are staunchly Islamophobic but not openly anti-Semitic. Anne Marie Waters, the leader of For Britain, has criticised Collett's neo-Nazi views.[10] UKIP member Carl Benjamin has dismissed Collett and PA for their anti-Semitism.[11]

The organisation has been exposed as trying to recruit children and teenagers through video games, such as by holding gaming tournaments for its supporters.[12] It has also produced home-schooling materials for children, including those aged under seven, who are told that all English people are white.[13]

PA claims it wants a complete halt to immigration, excluding exceptional circumstances such as foreign diplomats. It rejects applications for asylum in UK unless refugees are white, writing: "UK’s commitment to taking refugees would apply only to those descended from European nations or from other parts of the world who have a shared ethnic and cultural background or who can prove British ancestry – a notable example being white South Africans."[note 1]

Concerning first or second-generation non-British immigrants who are legally settled, PA will offer them "generous financial incentives in order to return to their ancestral homelands." This policy of voluntary repatriation is identical to the BNP's when led by Nick Griffin who would offer non-British families £50,000 to leave UK.[16]

PA supports white British raising their fertility rate from 1.5 to above 2.1 (less than 2.1 is considered subreplacement fertility).[17][18]

This decline in family values and the increasing difficulties we face raising families are hitting the native British the hardest. This is a crisis which is affecting us uniquely. We have been discouraged from building families for the past several decades – the most recent media campaign against us uses the threat of climate change to try and guilt-trip us into having fewer children. Fertility rates for native British women are lower than for foreign-born women which is fuelling a rapid demographic displacement. With consistently high immigration in the hundreds of thousands every year, combined with lower native fertility rates than for foreigners, the native British population is forecast to become a minority by the 2060s.

Despite PA's obsession with getting white British people to breed more — online supporters for PA are mostly childless neo-Nazi incels including Michael Coombs. Laura Towler, who promotes PA's messages of raising fertility rates,[19] is also childless and has been criticised by members of her own racist community for not having a load of white babies.[20]

PA opposes LGBT rights and argues "LGBT propaganda" should not be taught or promoted in public institutions:

The central building block of our nation is the traditional, nuclear family, which consists of a mother, father and children. The traditional family will be promoted as an ideal to be striven for and emulated. No public body will promote any alternative as either equal or superior to the traditional family. To that end, children will be protected from exposure to sexualised material or LGBT propaganda in all public institutions. 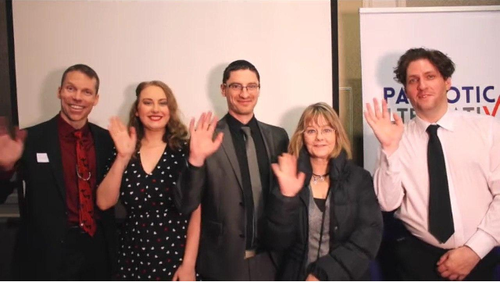 Patriotic Alternative hosted its first conference, with under 100 individuals in attendance, on 7 September 2019. Those who attended included racist pseudoscientist Edward Dutton, white nationalist vlogger The Golden One and neo-pagan Fróði Midjord. Its second conference was held on 14 March 2020 with approximately 200 individuals.[21][22] Those who attended notably included Lucy Brown, Tommy Robinson's former camerawoman and James Goddard, who in 2019 was handed a suspended prison sentence for verbally harassing MP Anna Soubry.[23]

Colin Robertson, a main speaker at the second PA conference was banned from subsequent conferences after it has been alleged he acted inappropriately towards a 20-year-old female at the conference and sent unsolicited sexually-explicit messages online while requesting nude images from other young women. Allegations and rumours involving the 20-year-old female include sexual or indecent assault perpetrated by Robertson.[24] In response to these allegations Colin has said, "I cannot comment on the rumours and allegations just now. A few of them are true, many are not" but admits his behaviour was inappropriate and claims to be receiving therapy for pornography addiction.[25]

PA has adopted the same tactic of the Groyper Army of spamming online discussion groups and social media. For example, "The chat on the stream was then flooded with alt-right and neo-Nazi comments: the frog face emoji[note 2] was posted repeatedly, someone declared, 'DESTROY COMMUNISM', while another wrote, 'VOTE PATRIOTIC ALTERNATIVE', voicing support for a new British far-right political party."[26]

Tabatha Stirling, boss of small Scottish publisher Stirling Publishing, was identified as a Patriotic Alternative member going by the nickname "Miss Brittania" (sic). In a video obtained by anti-fascist investigators she declared, "My name is Tabatha Stirling. I am an author. Nothing else to hide. Always been very conservative, been a nationalist, now ethno-nationalist." Under the Miss Brittania name she published several articles on the PA website, praising Enoch Powell, criticising LGBT teachers, and calling on people to celebrate their "positive Whiteness".[27]

In 2021, Stirling Publishing had been set to publish a book critical of identity politics called Welcome to the Woke Trials: How #Identity Killed Progressive Politics by controversialist newspaper columnist Julie Burchill, who cancelled the arrangement after Stirling's politics became public. Stirling also published the 2018 book The Colour of Madness, a collection of writing by ethnic-minority people about mental illness. She said, "I do have a publishing company and I have published The Colour of Madness, as I need to make money and that was a very ‘in’ way to do it".[27]