Since their conception as modern privately owned enterprises, corporations have engaged in a wide variety of human rights violations with or without the assistance of governments. Often these violations are centered around labor exploitation and attempts to establish indentured servitude by creating company towns

in which only company credits can be used as currency and entrapping their workers in unpayable debt.

The Universal Declaration of Human Rights is the foremost document for defining human rights. In particular, corporations have violated Articles 3, 4, 5, 12, 20, 23, 24 and 25 of the UDHR. There are also other important international documents that seek to legislate workers' rights, particularly the conventions set up by the International Labour Organization

, which itself is part of the United Nations, focusing primarily on forced labor and child labor as well protect the rights of labor unions. 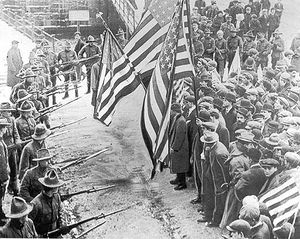 Union busting and strike breaking are the methods by which corporations have tried to prevent workers from joining a union and fight for their own rights. The Pinkertons became major union busters from the late 19th to early 20th century, while continuing its detective work[1] Though it should be noticed that the largest union buster in America is the federal government itself by using the antitrust laws, concieved by progressives to crack down and dismantle monopolies, to prevent union organizing.[2]

When workers attempt to organize unions they're fired.[3][4][5]

As technology advances, along with the security state expansion, surveillance has creeped into the workplace in developed countries.[10] The methods used vary from face scanning, microshipping, listening devices and data mining allowing bosses to track every move of their staff.[11][12]

All this surveillance increases inequality in the already unequal relationship between workers and bosses by creating algorithms that make the decisions of hiring, firing and other management for them.[13] Amazon-affiliated drivers have reported feeling pressured and leading them to speeding and urinating in bottles,[14] and the geolocation tags that nurses in Florida are forced to wear has diminished their ability to use discretion with their patients.[15][16]

The coronavirus pandemic has given momentum to expand the amount of surveillance.[17][18][19]

In January 2016, the European Human Rights Court ruled that it's unreasonable for employers to monitor their employees computers. [21] In 2017, a German court ruled that, while computer monitoring is reasonable, keylogging is a violation of privacy.[22] In the United States, there are very little regulation to prevent employers from spying and collect data off their employees. Existing laws meant to protect digital privacy exist such as the Electronic Communications Privacy Act

and the Stored Communications Act,

which protect against the interception of in-transit e-mails or their disclosure, contain broad "business exceptions", even outside the workplace.[23]

See the main article on this topic: Child labour

See the main article on this topic: Slavery

The De Beers Group engages in slavery, as well child labor, exploiting the working classes of African countries to mine diamonds.[26] The company uses prisoner labor since 1885[27]

, Nestlé and Hershey which use child slavery labour in Africa. Mars promised since 2000 that it would eradicate slave-source cocoa, but had not reached that "goal" by 2021, and alongside Nestlé and Hershey are facing lawsuits from former child slaves.[28] While also using slave labour from Thailand[29] Nestlé used the argument that requiring the company to report the use of slave labor could cost customers.[30] The fashion industry has also used the forced labour of Uighur people, currently targets of a campaign of cultural genocide by the Chinese government.[31]

Ben and Jerry's, an ice cream company with excellent PR, also engages in labor exploitation of Mexican migrants in Vermont.[32] This exploitation of immigrant farmworkers has been condemned as a form of slavery by human rights groups.[33]

The United States prison system also engages in slavery, due to a "loophole" in the Thirteenth Amendment that allows the government to enslave criminals.[34] Many companies take advantage of this including McDonalds, Sprint, Verizon, Victoria's Street, American Airlines and even PR-friendly Starbucks through a contractor, using prisoners to package their products at low cost.[35]

Another benificiary of prison labor is the US military, especially the US Army, through the Civilian Inmate Labor Program.

[36] In 2013, the US Army used prison labor to obtain $100 million worth of military uniforms.[37] Even during the coronavirus pandemic, private prisons still turn a profit due to slave labor.[38]

in which all stores and housing are owned by the company of which the most famous is Pullman, created in the 1880s in the Chicago city limits. The town survived until the panic of 1883 in which financial woes forced the company to lay off half of its work force and cut wages, without reducing rent or the price of goods at its shops.[39] Some of these company towns, such as Steinway village, New York, were built to weaken the labor movement[40] and exert social control; they still continue to operate today, especially in the South.[41] Facebook and Amazon have sought to also build their own company towns in recent years.[42]

The use of slavery for corporate profit dates to the very first corporation ever chartered, the Dutch East India Company, that set up slave plantations in what is now South Africa and the eponymous East Indies, now the Philippines and Indonesia. The company made a policy of transporting slaves from where they were enslaved to elsewhere in order to discourage escapes back into the local population.

Sweatshops are factories where workers are employed at very low wages under horrible conditions that are hazardous to their very health.

Bangladesh is the country with the largest mortality rate of sweatshops incidents and other workplace-related injuries due to lack of regulations.[43] In fact, Bangladesh's sweatshops are so unregulated that its workers live in the factories themselves which are often subject to fires due to poor electrical wiring and lack of emergency exits or fire extinguishers.[44] In early 2012, a fire started at 5:22 am local time in an illegal factory belonging to Tazreen Fashions in Bangladesh killing 112 workers. The workers slept in the third floor of the factory, and were trapped when the fire spread to the upper floors unable to reach the safety of the rooftop.[45] In April 2012, a building housing five factories in Rana Plaza collapsed killing 1,132 workers and injuring 2,500. Despite the magnitude of these deaths, very little compensation under Bangladesh's labour code was paid except for some financial compensation paid voluntarily.[46]

Another country where sweatshops are common is the People's Republic of China where a large, highly-skilled labor force works at low cost and makes it attractive for high-tech manufacturing.[47] In 2010 various workers at Chinese factories manufacturing cellphones and computers committed suicide, drawing attention in Western countries[48]. Foxconn's reaction varied from asking its workers to sign an anti-suicide pledge[49] to install nets to catch suicidal workers that jump off the rooftop.[50][51]

Some people have defended sweatshops[52] or claimed that banning them will hurt the poor.[53]

This phenomenon has also started to manifesting in the United States and the United Kingdom with the most notable and infamous example being Jeff Bezos' online retail Amazon which has unsafe working conditions.[54] Workers have to skip bathroom breaks to keep their jobs,[55] employees having to work on their feet for twelve hours or more,[56] with some[57] accusing the company of treating its workers as robots.[58]

This situation escalated further with the coronavirus pandemic, and Amazon refusing to pay sick leave,[59] implementing an temporary[60] hazard pay of a groundbreaking

amount of two dollars per hour, with unsafe working conditions fuelling infections amongst the workforce.[61]

Other areas of exploitation includes Rockstar Games forcing its employees to work a 100 hours per week,[62] which it later tried to defuse[63] as well exploitation at Disneyland with employees facing homelessness[64] and not earning enough to meet basic living expenses.[65][66]

In the sinosphere there's a strong undercurrent of labor exploitation and overwork, manifesting in phenomenon like karoshi

in Japan, gwarosa in South Korea and the 996 working hour system

in mainland China. South Koreans work the most amongst OECD members[67][68] Though in Japan it seems that younger generations are pushing against this guilt-based overworking.[69]

Wage theft and lack of breaks[edit]

Wage theft is a practise which includes not paying overtime work, misclassifying workers as "independent contractors" or refusing to pay benefits. According to a study by the Economic Policy Institute employers have stolen $15 billion a year from workers by paying less than the minimum wage.[70] Companies that engage in wage theft includes Jimmy Johns (sandwich chain), FedEx (delivery service), Intuit (accounting and finance software), the Walt Disney Company and subsidiaries like Pixar and Lucasfilm, Google, Apple, Adobe, Intel (technology), Walmart and McDonalds(retail).[71]

Various companies have also sought to reduce bathroom breaks. In 2014, the WaterSaver Faucet Company was sued by trying to monitor the bathroom use by the staff.[72] Pregnant workers also suffer from using the bathroom too much[73] and can even be fired for using too many bathroom breaks.[74] According to a report, poultry workers are denied bathroom breaks and are forced to wear diapers.[75]

It's rather difficult to find a mega corporation that doesn't engage in some sort of abuse.

was a company that trade in tropical fruits, primarily banana, and its shenanigans created the term "banana republic".[76]

Even in modern days, the Company's crimes are denied by Latino wingnuts as a "communist conspiracy". [77]

See the main article on this topic: Nestlé

You know those evil corporate executives in dystopian movies who hold the world's water supply hostage? Meet their real life incarnation.[79] Stealing water during a drought is not their only crime, though. They're also responsible for stunting the growth of infants in developing nations by misleading parents about their baby formula,[80] using child slavery to make their chocolate,[81] and being completely unapologetic about any of it.

Not every rumor about Nestlé's wrongdoings is true, however. They were widely blamed for the 2008 Chinese milk scandal

in which milk products, including infant formula, were tainted with melamine and killed at least 6 babies; however, Nestlé was not among the companies implicated within China, and none of its milk products manufactured there were intended for sale within China. Only its Taiwanese exports had detectable levels of melamine, and these levels were so low as not to pose a health risk -- and none of these products were baby formula.[82]