Genesis: Paradise Lost (also known as Genesis 3D) is the unknown and obscure much-hyped, highly-anticipated project by Eric Hovind of Creation Today and Resurrection Pictures[1] with Ralph Strean directing and producing.[2] Since 2012, different organizations have been asking for donations and it is not clear how much money has been raised in total for it.

Definitely NOT to be confused with the similarly named Genesis3D

game engine, as made infamous by the propaganda-based first-person shooters Catechumen 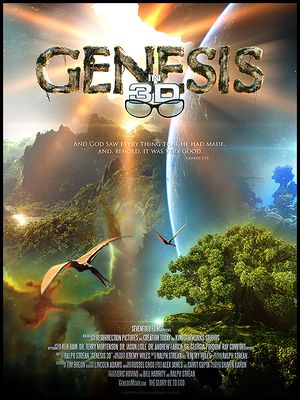 Apparently it's Genesis in 3D now.

According to Resurrection Pictures 'Genesis, has been in the works since Ralph first started production in 2008. Resurrection Pictures and Creation Today did not get involved until late 2012 when they teamed up with Strean to assist on the financing side. The movie has taken many different twists and turns."[3]

In 2008 Resurrection Pictures and Creation Today announced plans to produce Creation, its first original film project, "a biopic that dramatizes the life of Kent "Dr. Dino" Hovind."[4] Kevin Miller, the writer of Expelled: No Intelligence Allowed wrote the movie's script; the film was "scheduled for production in 2010."[4] The organization asked for tens of thousands of dollars to begin production. No word, however, on how they would cover Hovind's years in prison for tax fraud.

In 2010 the film was not produced, but instead was renamed Dr. Dino: Where Creation and Evolution Collide, and Resurrection Pictures claimed "it is scheduled for production in 2011."[5] Of course, the website asked for money. It also posted part of the script which described Kent Hovind in a science classroom teaching children about "evolutionists".[6] In February 2010 Resurrection Pictures wrote: "We are so excited about this film and are looking to release it in theaters in 2011". This movie was never made and was abandoned.[7]

In 2012 Resurrection Pictures discovered a talented young writer, producer and director named Ralph Strean who had been working alone on the 3D movie since 2008. Strean had writen the script and was looking for investors to help him finish the film. With the help of several investors, Strean continued to work on the film alone. It would take another five years of 15 hour seven days a week work days before Strean completed the movie in 2017. It was released in limited theaters across America on November 11, 2017 and was a success with the christian population.

Sometime around 2013, Eric Hovind and Creation Today became involved in the financing of the movie, and was given promotion from Christian media.[8] Hovind asked people for $275 for 1 second, $8,250 for 30 seconds and $16,500 for one minute of the movie at his website.[9]

In September 2014 it was announced that the movie would be delayed for about a year so more money could be raised, writing: "While we do have a set goal of completing the film in a little under a year, we're also raising more funds to add more CG to the film, so our release date is like a moving target."[13]

By early 2016 the film still had no release date.[14] However, Sevenfold Films and Creation Today continued asking for money and selling items to promote the movie.[15] On January 21, 2016, Eric Hovind said he needed people to give him another $90,000 to finish the movie and claimed it would be completed in "eight months".[16]

In June 2017, Ralph Strean came up with the final title Genesis: Paradise Lost, supposedly part 1 of an unknown number in a series.[17] It includes animation alongside commentary from creationists, including Ken Ham and Ray Comfort.[18] In July 2017 another request was made from supporters to donate $350,000 to finance showing the movie in theaters in the United States.[19][20] By August 2017 they had raised $300,000[21] and then it was announced they had received all the money needed.[22] It premiered at 7:00 p.m. on the 13th of November, 2017[23] Not one actual critic bothered to review it, as per Rotten Tomatoes.

Evolution of Genesis over the years[edit]

Resurrection Pictures is currently in the script preparation phase of its story about a high school biology teacher who decides to begin telling the truth to his students about where we came from and what follows in the often funny and tearful story of one man's struggle to stand up for the truth. This script is abandoned and never produced.[24]

In late 2012, the movie summary was: Ralph Strean of Sevenfold Films teams up with Resurrection Pictures and Creation Today to assist Strean in his 3D animated movie project which Strean had been working on alone for the past three years.

Genesis 3D Movie is a feature-length documentary film based on the first book of the Bible, featuring stunning 3D visual effects accompanied with expert scientific research![14]

GENESIS: PARADISE LOST will entertain and educate as an event for the whole family. The digital animation is interwoven with insightful commentary from accredited scientists and educators such as Dr. Charles Jackson and Dr. Georgia Purdom, and popular speakers such as Ken Ham and Ray Comfort. Cultural apologist Dr. Voddie Baucham, Jr.’s deep booming voice serves as Genesis’ “unseen narrator” whose vocal presence gives the visual images deeper meaning and life.[18]

With the wild history of this film, the trailer is significantly different from what it was in the past.