From RationalWiki
Jump to: navigation, search
The fashtag should not be confused with Fashtag Clothing, an upscale London clothery

The original "fashtag", captioned "The hashtag is a symbol of hate" [1]

The fashtag or Bash the Hash was an attempted right-wing troll campaign spawned in May 2019 by 4chan's /pol/ board. The campaign was intended to dupe The Media into believing that the hashtag

is a fascist, alt-right, or hateful symbol. The campaign produced fake adverts, fake media coverage and was praised by numerous far-right pundits.

The "fashtag" was favorably received by neo-Nazi blog The Daily Stormer,[3] "journalist" Tim Pool[4], fetid swamp /r/TheDonald,[2] ancap furry Mr. Dapperton,[5] disgraced pundit Milo Yiannopoulos[6] and a few small right-wing YouTubers.[7][8][9][10][11] More than 200 threads on 4chan attempted to organize the operation.[12] Many of these sources claimed or implied that "The Media" was duped and described the hashtag as a "symbol of hate".

In reality, all mainstream coverage noted that the campaign was a hoax, including The Telegraph,[13] VT

,[14] and even fucking RT.[15] This also includes the article from The Daily Dot,[16] which was claimed as proof that the media took the bait[4] despite being written by an InfoWars writer.[17] Claims to the contrary were mostly themselves fake news, including a fake local TV spot[18] and a fake CNN screenshot of SE Cupp produced below: 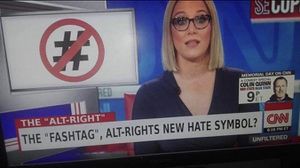 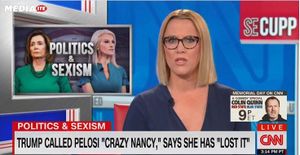 In short, as usual, this 4chan "hoax" mostly consisted of 4channers hoaxing other 4channers into believing that they were actually having an impact.

In Season 4 Episode 8 of the German comedy series Switch: Reloaded, a sketch parodying The Office with Michael Kessler as Adolf Hitler features a redesigned nazi flag with a hashtag/number sign replacing the swastika. The episode first aired in July 2010, nine years before the hoax emerged.[21][22]