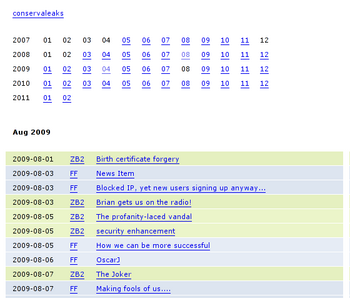 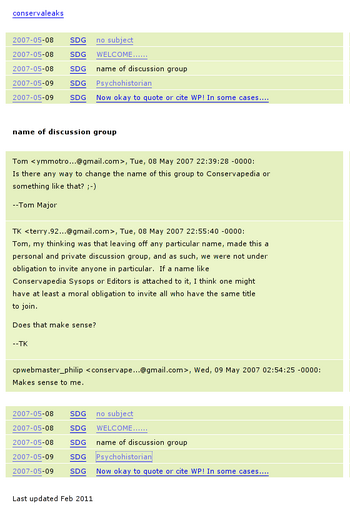 Awesome. Yet more hilarious outpourings of bile to read through. For convenience, could you stick a google box up on the front page please? --JeevesMkII The gentleman's gentleman at the other site 04:29, 21 February 2011 (UTC)

OMG. Did Ed "Two Meters" Poor really accidentally forward a fab five thread with TK slagging Kendoll to ZB? If so, Kendoll must know all the CP sysops think he's a fuckup. Why on earth does he stay? More to the point, why does he keep making the same outrageous claims it is clear not one of them actually believes? --JeevesMkII The gentleman's gentleman at the other site 04:40, 21 February 2011 (UTC)

It's great... but can we have a download too? There's no regex facility on the site, and I prefer having local content for when I'm offline. –SuspectedReplicant retire me 06:09, 21 February 2011 (UTC)

Ah, what a thing of beauty to behold first thing in the morning! And the Conservaleaks thing is pretty awesome too. :) MB many thanks for all your hard work on this! --Ψ GremlinSermā! 07:06, 21 February 2011 (UTC)

Thanks a lot. And I just realized that my post sounded somewhat ungrateful, so let me clarify that I'm not. I've worked with mass-replace in the past and know how messed-up these group files look internally, so I know that this must have been an insane amount of work. So epic kudos for that! I just like to have a "traditional" offline backup copy I can quickly search. In other news, Ken suggested that Andy should challenge Jimbo Wales for an evolution/atheism debate... --Sid (talk) 10:05, 21 February 2011 (UTC)

You're all very welcome, guys; I'm happy you like it. You shouldn't thank me, you should thank Psy for rescuing the delicious treachery out of TK's mailbox before it could fall prey to bit rot. In fact, I would like to thank Psy for leaving me the honor to be the one to actually publish it.
I'm still not absolutely, perfectly happy with how the whole thing looks and feels. Minor tweaks will continue to be made at unpredictable intervals. I will probably also create a version you can download and extract into your local filesystem for offline browsing, or into your web server's document tree as a mirror. This is not going to be very hard because the site consists of static HTML files already; I would basically just have to add .html suffixes to the HREFs so the links will work without mod_rewrite.
Mountain Blue 01:37, 22 February 2011 (UTC)

What's the only thing scarier than middle eastern unrest and the idea of North Korea having WMDs?

I love Ed's random non-sequitur in the middle of that thread: "I sometimes wonder if they engineered and manipulated the housing bubble so it would "pop" exactly 2 months before the election last year." Um, what? Tetronian you're clueless 13:36, 21 February 2011 (UTC)

Voluptuous breasts and bulging vulva anyone? CrundyTalk nerdy to me 10:33, 21 February 2011 (UTC)

Lobarse in the Colbert reaction thread: "That guy should have known better than to take on a citizen journalist." Ooh, scary. Webbtje (talk) 11:13, 21 February 2011 (UTC)

Interesting to note that in that same message TerryH opts to congratulate himself by the use, borrowed from the film Anatomy of a Murder, of a term normally employed by defendants offering a plea of temporary insanity. Tylersboy (talk) 11:55, 21 February 2011 (UTC)

In the same thread, I see Chuckarse has a thing for V's Anna. I thought true-blue conservatives didn't like dominant women. Or is that only if they aren't wielding handcuffs and a whip? --Ψ GremlinKhuluma! 11:59, 21 February 2011 (UTC)

One thing TZB II has, is their reactions to reception of the CBP. First one I've found is Johnny X-Ray moaning about the Christian Science Monitor ripping CP a new one. Of course, the writer is a professor (of religion) at Butler U, so thus a liberal, so can be ignored. Heads back in sand everybody, carry on as normal. --Ψ GremlinParlez! 11:59, 21 February 2011 (UTC)

Most amusing in my opinion: Karajou calls for caution as Jack Chick doesn't like the CBP (relevant tract)... larronsicut fur in nocte 12:10, 21 February 2011 (UTC)

Fair play to Kara, he's been consistently vocal behind the scenes that the CBP isn't a good idea, shouldn't be done and they shouldn't be messing with God's word. But note that he never tackles Andy directly on the matter. That would require a backbone. --Ψ GremlinRunāt! 12:20, 21 February 2011 (UTC)

Yeah, that's a trend I also noticed during my initial skimming. Think it was related to the Obama article, but everybody is really careful whenever they feel that they're entering Andy's territory. Even when they assume themselves to be on Andy's side, you can feel that every post is worded with the greatest care to be 100% certain that Andy won't consider it contrary to The Truth. --Sid (talk) 17:18, 21 February 2011 (UTC)

This thread reveals so much about the CP mindset, from Ken's weird idea for revenge against Trent to Kara's belief that every troll on CP is Trent. 江斯顿What is it now? 15:30, 21 February 2011 (UTC)

Wait...so Ed is saying that he is Jewish just because two of his grandparents were? Come on, even he must see how silly that is. If I met him on the street and asked him about his beliefs, he certainly wouldn't refer to himself as Jewish. Tetronian you're clueless 21:47, 21 February 2011 (UTC)

I was highly amused by the postings going on during their "infiltration" of RW before they blocked us all, and the build up, meetings, grandiose planning and revenge fantasies. Worth checking out. Tmtoulouse (talk) 18:11, 21 February 2011 (UTC)

Best bit of that:
TK: After our little meeting later, I am going to respond to each of them, with an appropriate link to their little "rational wiki", with the information it has all been copied and sent to the authorities.
Kara: We do have to wait for confirmation that the Feds have been notified, otherwise our threats at retaliation won't work.
Shit, it's been a long wait, guys. --Ψ GremlinSpeak! 22:00, 21 February 2011 (UTC)

ZB2 is full of background talk (mostly senseless bragging) about that month of trolling Rob and TK orchestrated on WP.

Especially amusing from my POV is the part where TK tried to get one of my comments oversighted for mentioning a certain name (guess which one) that appears in the LA Times article. Best of it all? In the same thread, we get these two quotes by Rob (one before and one after TK reported me) which look hilarious side by side:

And of course, when the sysops are flailing aimlessly, you can count on Ken to actually pinpoint the real problem (emphasis mine): "The Wikipedia article on Conservapedia will not get much better. The reason I say this is because the main problem Conservapedia has is that it doesn't have very many prominent conservatives or conservative organizations saying good things about it, but I do think this could be improved."

Also of note is that other than TK, Rob and Karajou, I rarely saw others participating in those threads. People politely looking away again? --Sid (talk) 18:26, 21 February 2011 (UTC)

TK's posting fom Apr 8, 2010 in the Progress in NPOV for WP's CP related entries is incomplete; it can be found in its entirety here: RationalWiki 1.0 user:icewedge/Archives. nobsdon't bother me 23:38, 9 April 2011 (UTC)

Apparently, they didn't even keep proper track of who had the ability to flip the switch. The non-idiot ball is held by Jpatt this time, who wonders why the webmasters implemented a switch, but no logging mechanism to keep track of when registration is on or off. --Sid (talk) 18:29, 21 February 2011 (UTC)

Under most obvious, reasonably straightforward, or even just remotely plausible implementations of this kind of switch you could have just grepped the access log. Then again, you would have had to know what an access log is and where to find it. Mountain Blue 01:16, 22 February 2011 (UTC)

I thought this account creation / editing revelation was a brilliant example of Hanlon's razor. We all thought that TK was surreptitiously turning one off whenever the Assfly turned one on, in order to prevent new editors signing up/sticking around. But alas, Assfly himself was doing this, as he could see no reason to allow someone to sign-up and edit an article on a wiki-encyclopaedia. DeltaStarSenior SysopSpeciationspeed! 02:20, 22 February 2011 (UTC)

Should we link to these archives as MountainBlue has them hosted and posted, or is there a way we can move them on-wiki? There's so much good material to back up our various RW articles on CP here, but is linking to a resource that is given to us by the good grace of others the right thing to do? Are we just going to have to relink later? DogP (talk) 21:48, 22 February 2011 (UTC)

I would say yes, that's a good idea. However it was decided after the original ZB leak not to host the messages locally, for various reasons. Perhaps the community would like to reconsider this proposal now? DeltaStarSenior SysopSpeciationspeed! 22:00, 22 February 2011 (UTC)

(1) The archives are meant to be linked to. I actually replaced most old file references I could find with working hyperlinks myself. I keep URLs stable across updates. I also took steps to make sure the site can be moved onto another server, should the need arise, on very short notice without breaking any links. It's cp.noym.net and not noym.net/cp specifically so it can have its own DNS A record.
(2) It's Mountain Blue, not MountainBlue. Mountain Blue 04:51, 23 February 2011 (UTC)

MouthfulOfGlue, it's just fucking fabulous what you're doing! (No, seriously, thanks for the answer and all that hard work MB) Godspeed, MoundOfStew! DogP (talk) 18:33, 23 February 2011 (UTC)

Version III.01 is up. I kind of announced this two day ago.. As I keep trawling the leaked discussions, I keep finding places where the parser fucked up and the pages still contain tag soup, mail provider banners, or quoted previous messages. Sometimes this will annoy me into updating the parser and recompiling. Sometimes I will then update the version on the server. Mountain Blue 22:31, 23 February 2011 (UTC)

You mean the bit about you saying "He he he....as I said, we can force them to moderate their behavior"?
and TK saying "Along with his idea of forming a LLC for Rationalwiki, this seems a convenient way to completely erase their history, user names, etc. Read between the lines there." --PsyGremlin講話 13:04, 12 April 2011 (UTC)

Yes, and this is in keeping with longtime discussions on this site to make RW "less CP-centric". nobsI am a fugitive from an ideological fever swamp 22:01, 3 September 2011 (UTC)

There is an exchange of the fist 7 emails not found on this discussion thread, and it relates to some of the problems User:Iduan currently has regarding his request for sysopship. And the editor of Conservaleaks should have that message because it was included in the first published email on this thread, which begins, "I went on facebook..." nobsViva la Revolución! 23:46, 23 July 2011 (UTC)

Yes, in the raw source the first email has a few Original Messages attached to it. The parser automatically removes any Original Messages (that it recognizes as such) because nineteen times out of twenty they're just useless gunk. Mountain Blue (talk) 01:07, 24 July 2011 (UTC)