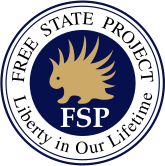 Porcus spina: A pig with a bunch of pricks

The Free State Project is a group who are in the process of trying to convince around 20,000 libertarians to move to New Hampshire. The goal is to achieve enough influence to make New Hampshire a model libertarian society. In February 2016, the group announced that the target number has been reached, starting the next phase of the plan — moving all those people to New Hampshire within the next 5 years (starting in 2016).[1] How many will actually follow up is unclear. In 2012, only 1,827 were actually living in New Hampshire and there were 2,550 in-state "friends" (people who could not move to New Hampshire because they already lived there).[2]

Their mascot is "Porc" the porcupine.

Libertarian writer Kenneth "Boston T. Party" Royce disagreed with their choice of New Hampshire on the grounds that it was on the East Coast and therefore far too close to the pernicious liberal influence of New York (to say nothing of socialist Massachusetts, and — gasp — Canada), so he started his own rival "Free State Wyoming."

The Free State Project, as with libertarianism in general, has many opponents. New Hampshire is far from libertarianism (at least in its alcohol laws) and the effect of 20,000 on the state's population of 1,316,000 is yet to be seen, but it is one of the few hopes there is for a libertarian short of moving to Somalia or some random patch of woods.

The Free State Project has convinced about 1,800 libertarians to preemptively move to New Hampshire. However, since the start of the project, these few people have still had a significant impact on the politics of the state because, in the words of one commentator, they are all "obsessed with politics".[3] Several bills have been introduced by Free Staters, and at least one (opting out of the Regional Greenhouse Gas Initiative) has already been passed. It just goes to show the occasional power of an organized concentration of individuals.

The United States does have a tradition of freedom advocates using the power of emigration and geographical demographics to tilt the scales of political power. See Popular Sovereignty; people deliberately moved to the Missouri/Kansas territories (a.k.a. 'Bleeding Kansas'

) to vote in anti-slavery legislatures. Thankfully the libertarians wouldn't face anywhere near the same amount of violence that those immigrants did.

Most of the derision stems from the impracticality rather than the underlying idea; the United States is much, much larger in the 21st century in both area and population than it was during the times in which visionaries like Joseph Smith or Stephen F. Austin could build a political demographic from scratch, and it would require a larger human wave these days to do so now. Libertarians would be better served trying to grow their numbers first rather than wasting members' resources in projects like this. Assuming that they wouldn't have moved to New Hampshire or Wyoming otherwise.

Cantwell after being pepper-sprayed at the Unite the Right rally

One controversy that the Free State Project has faced is that when you invite a whole load of libertarians to come to one state, some of them tend to be nuts. When Christopher Cantwell, a free stater activist who advocates killing police officers as "self-defence" (because they are going around engaging in "violence" by arresting people for breaking the law), the leadership of the Free State Project decided to eject him from their movement, causing some counter-reaction from libertarians who don't see anything particularly wrong with shooting cops.[4] Cantwell has since distanced himself from mainstream libertarianism and embraced the alt-right, racialism, and aspects of fascism. His own website describes himself using the tagline "Anarchist, Atheist, Asshole", and he would later be arrested in 2017 for his involvement in the Charlottesville, Virginia "Unite the Right" rally (including a boastful interview he gave for a Vice documentary on the riot).[5] Cantwell was a scheduled speaker at the rally.[6] Sounds like a pleasant guy to have at a party.[7]