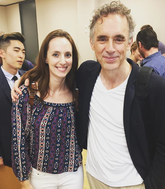 Claire Lehmann (1985–) is an alt-right Australian anti-feminist and transphobic crank who has been described as "Australia's Mistress of the Intellectual Dark Web".[1] She appears to blame everything bad, even including obesity[2][3] on feminists, who she argues are destroying the West alongside leftists, SJWs and what she calls "blank-slatists" (in the context of race and intelligence by this she means mainstream scientists who reject racist pseudoscience).

Lehmann is the Editor-in-Chief and founder of the right-wing online magazine Quillette.[4]

She identifies as an Australian nationalist and opposes multiculturalism.[5] She's a fan of Jordan Peterson and has connections to white nationalist Emil Kirkegaard.[6][7]

Lehmann graduated from the University of Adelaide in 2010 with a bachelor's degree in Psychology and English. She worked 2011-2014 as a Policy Research Assistant at Australian College of Nursing and 2015-2016 as a Communications officer​ at National Centre for Immunisation Research and Surveillance.[8]

See the main article on this topic: The Rebel Media

She started working for the alt-right rag The Rebel Media in 2017 and was interviewed by Ezra Levant.[9] According to Lehmann after she graduated from university, she started writing articles, but claims that newspapers rejected her submissions because they were critical of feminism and she was blacklisted by the mainstream media.Do You Believe That? This led her to set up her own online publication Quillette. She's made over a dozen anti-feminist and anti-SJW videos for The Rebel Media.[10]

See the main articles on this topic: Quillette and HBD

As Editor-in-Chief of Quillette, Lehmann has allowed numerous far-right, racist and sexist individuals publish articles in her online magazine, as well as HBD pseudoscientists, e.g. Adam Perkins and Richard Haier, the latter of whom publishes controversial studies on race and intelligence. Lehmann herself has a history of defending "human-biodiversity" and hereditarianism and criticizes what she calls "blank-slatism":[11]

I think that we are simply offering up an alternative to the blank slate view of human nature that appears to be dominant within the media ecosystem. The blank slate view, which is the idea that who we are is entirely or predominantly the product of culture and socialization, is very common in left-leaning media. And left-leaning media also happens to provide most of today's science journalism. It's kind of ironic, because the convergent evidence coming out of evolutionary psychology, biology, behavioural genetics and neuroscience that falsifies this blank slate view is simply incontrovertible at this point, but most of the media, and even the popular science media keep clinging to it. At times it's just embarrassing.

Another factor is that although conservative or libertarian magazines are less wedded to blank slate dogmas, they nevertheless do not give a lot of space to science journalism. So there is a gap in the market for data driven, scientifically literate commentary that does not conform to an outdated view of human nature. Quillette has just run with this.

It should be pointed out that for variation within populations, blank-slatism has been thoroughly falsified. However, Lehmann as a proponent of HBD controversially argues against the blank-slate hypothesis for differences between populations in IQ, which is dubious (e.g. Richard Lewontin provided an example where within two populations, heritability is high, but "the difference between the two groups is due entirely to an environmental factor".).[12]

Although Claire Lehmann used to write on the human biodiversity movement, she has since scrubbed the internet of her work. However, a number of prominent blogs in the HBD community still contain pages that reference her past work.[13]

Lehmann is a proponent of the gender binary, the erroneous belief there are only two genders (male and female), which she bases on her conflation of sex and gender.[15][16] [17]

For this reason there is sometimes transphobia in her tweets and articles she publishes.[18][19]

Quilette (the webzine that she runs) has run articles in defense of James Damore's neurosexist bigotry. She has also used a "Just Asking Questions" strategy with regards to autism, wondering whether it supports gender essentialism.