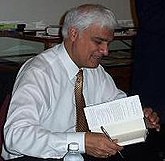 Ravi Zacharias, born Frederick Antony Ravi Kumar Zacharias (1946–2020) was an Indian-born Christian evangelical apologist. He was the the founder and chairman of the board of Ravi Zacharias International Ministries (RZIM) and an author of many books. Zacharias grew up in an Anglican home, but claims he was an atheist until age 17 when he became a Christian after a failed attempted suicide. Zacharias earned an undergraduate degree from Ontario Bible College in 1972 (now Tyndale University College and Seminary) and his M. Div. from Trinity International University. Although he frequently used the title "Dr. Zacharias", he held no academic doctoral degree.

Zacharias held the Christian worldview because he believed it was unique for answering the following questions sought by man: that of origin, meaning of life, morality, and destiny. Zacharias held that there must be a Creator and all morality comes from him. He used such logic as: if there is a moral law, then there is a law giver. He made claims such as "naturalists have no explanation for humanity's moral framework."

Zacharias did not accept the theory of evolution. He believed that it is incompatible with the second law of thermodynamics, and he expressed skepticism of the fossil record. As well as being a scientific ignoramus, Zacharias was often taken to breaking the 9th Commandment in order to discredit his opponents. Tragically he flew under the radar of potholer54 and was never nominated for a coveted Golden Crocoduck award. He was also guilty of being oblivious to the Dunning-Kruger effect. Whether he enjoyed pretending to be an expert on subjects outside of theology is not known. It is also not known if Zacharias deliberately realized he misrepresented new atheism, science, and human sexuality, or if he didn't learn the arduous complicated task of doing a Google search. In his seminars, Zacharias was a huge fan of using anecdotal evidence, to the point that he mysteriously forgot to use any other evidence. His incredible talent for quote mining also left the mining industry baffled as to how one can dig so deep when fueled by the desire to dig up out of context diamonds. In November 2009, Zacharias signed an ecumenical statement known as the Manhattan Declaration calling on Evangelicals, Catholics and Orthodox Christians to engage in civil disobedience with regard to laws which the declaration claims would force them to accept abortion, same-sex marriage or other matters that go against their religious consciences. His followers are still waiting for the moment when he will tie himself to a Christian flagpole to protest gay marriage.[1]

For many years Zacharias claimed to have been "a visiting scholar at Cambridge University." In 2015 this claim was investigated and found to be false. In response to a Freedom of Information request, the University of Cambridge indicated:

We can confirm that Mr. Zacharias spent a sabbatical at Ridley Hall in Cambridge.

It is undisputed that Zacharias spent several months on a sabbatical at Ridley Hall, a religious training school in the town of Cambridge in 1990. However, his did not make him a "visiting scholar at Cambridge University."

Zacharias' ministry immediately removed the claim from his website after the investigator indicated an intent to go public with the Cambridge statement.

Zacharias referred to himself as "Dr. Zacharias" in press materials, in his official bio and on the jacket of some of his books. However, he has never earned an academic doctorate degree and his doctorates are only honorary. His highest degree is a Master of Divinity degree from Trinity Evangelical Divinity Seminary. He failed to note in his publicity materials and website bio that these are only honorary. At Zacharias website, he claimed to hold a Doctor of Sacred Theology degree, one of the highest academic degrees conferred by Catholic universities.[3] These allegations were documented in part in a press release issued by two atheists and a Christian in August 2015 and in YouTube videos releasing information acquired by Freedom of Information requests to Cambridge and Oxford.[4]

In the summer of 2015, after public criticism, Zacharias reduced the number of references to himself as "Dr. Zacharias" at his website. After continued public criticism by Christians, Muslims and atheists on YouTube and elsewhere, in late 2016 Zacharias added the word "honorary" to his official bio, but removed it several weeks later. His curriculum vitae specifies that his doctorates are honorary.[5]

Zacharias has claimed frequently to have been a "senior research fellow" at Oxford University. In 2013 he told a Christian journalist that he uses this credential "in the academy."[6]

Freedom of Information requests, however, revealed that the title was merely honorary and conferred by Wycliffe Hall, an "affiliated institution" of Oxford University. After being advised that his credentials were under investigation, Zacharias removed the Oxford research fellow claim from his website.[4]

Responses to allegations of academic deceit[edit]

Zacharias issued no written public statement about these allegations. His ministry has responded privately to concerned inquirers.[4]

Canadian Lori Anne Thompson and her husband sent a demand letter to Zacharias requiring him to pay $5 million in exchange for them refraining from filing a lawsuit that would have accused Zacharias of impropriety involving an exchange of texts between Lori Anne Thompson and Zacharias. She had texted nude photos of herself to Zacharias. In response, Zacharias filed a RICO lawsuit against Thompson accusing the couple of trying to extort money from Zacharias.[9] The case was settled in November 2017 with a non-disclosure agreement.[9] In a 3 December 2017 statement,[10] Zacharias said, "Let me state categorically that I never met [Thompson] alone, publicly or privately. The question is not whether I solicited or sent any illicit photos or messages to [her]—I did not, and there is no evidence to the contrary—but rather, whether I should have been a willing participant in any extended communication with a woman, not my wife. The answer, I can unequivocally say, is no, and I fully accept responsibility." Zacharias added that he had been "absolutely faithful" to his wife Margie throughout their marriage, but acknowledged that he "failed to exercise wise caution and to protect [himself] from even the appearance of impropriety".[9][10]

Four months after Zacharias' death in May of 2020, three women who worked at two day-spas he co-owned in Atlanta came forward alleging that Zacharias had sexually harassed multiple massage therapists over the course of a period of about five years. It is alleged when at the spa Zacharias would expose himself every time, and would touch himself every time. According to Christianity Today, "Zacharias masturbated in front of one of the women more than 50 times, according to her recollection. He told her he was burdened by the demands of the ministry, and he needed this “therapy.” He also asked her to have sex with him twice, she said, and requested explicit photos of her."

Other women also confessed to Christianity Today,“He would touch my leg, which was kind of by his hand, but then he would run his hand up to the middle of my thighs and then to the private area,” one woman said.

Another woman recalled Zacharias touching her lower back. It seemed friendly, almost comforting. Then he moved his hand down and inside of her pants. Several other times, he moved his hand up her side and touched her breast.[11]

His former business partner expressed regret at not stopping Zacharias and issued an apology to one of the alleged survivors.

Carson Weitnauer, a former employee, referred to Zacharias in response to the allegations as "one of [his generation's] greatest frauds," a "sexual predator", and a "uniquely charismatic manipulator."[12]

Ravi Zacharias International Ministries initially denied the claims but subsequently engaged a law firm to perform an investigation. On December 23rd, 2020, RZIM confirmed that the allegations were true and released a preliminary report from the investigation.[13] "The interim investigation update indicates this assessment of Ravi’s behavior to be true—that he did indeed engage in sexual misconduct.[14] This misconduct is deeply troubling and wholly inconsistent with the man Ravi Zacharias presented both publicly and privately to so many over more than four decades of public ministry. We are heartbroken at learning this but feel it necessary to be transparent and to inform our staff, donors, and supporters at this time, even while the investigation continues."

On 11 February 2021, Ravi Zacharias International Ministries released the results of its investigation, concluding that there was credible evidence that Zacharias had engaged in sexual misconduct.[15]

Accordingly, it was found that "Ravi Zacharias solicited and received photos until a few months before his death in May 2020 at age 74"[16].

According to investigators, Ravi Zacharias also used tens of thousands of dollars of ministry funds which was dedicated to a “humanitarian effort” to pay four massage therapists, providing them housing, schooling, and monthly support for extended periods of time.[16]

According to Christianity Today, "One woman told the investigators that “after he arranged for the ministry to provide her with financial support, he required sex from her.” She called it rape. She said Zacharias “made her pray with him to thank God for the ‘opportunity’ they both received” and, as with other victims, “called her his ‘reward’ for living a life of service to God,” the report says. Zacharias warned the woman—a fellow believer—if she ever spoke out against him, she would be responsible for millions of souls lost when his reputation was damaged.[16]"

The board of RZIM, stated it was, "shocked and grieved by Ravi's actions," and apologized to his victims: "Words cannot come close to expressing the sorrow that we feel for what you have been through or the gratitude we feel for the bravery with which you have responded."[17]

Response from the Christian community[edit]

These allegations of deceit raised concerns in some Christian circles, including the Christian Research Network.[18]

Nevertheless, the allegations seem to have done little to harm Zacharias in the wider Christian community, even among academics who are aware of the allegations.