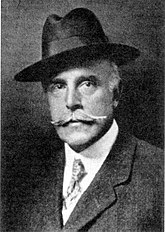 Madison Grant (1865—1937) was a racist and eugenicist who was a major influence on Adolf Hitler's racial theories, and who also played an important role as a conservationist in the creation of America's National Parks and the Bronx Zoo. This proves that all environmentalists are evil.

Despite his considerable influence in the preservation of deer, bison, and the California redwoods, his environmentalism was largely provoked by a desire to have lots of beasts to shoot.

Grant came from a wealthy Manhattan family; his father was Gabriel Grant, a famous surgeon during the American Civil War who was awarded the Medal of Honor. His ancestors included many distinguished Americans including Jessé de Forest, an early Walloon settler in the Netherlands' north American colonies; Richard Treat, a Pilgrim settler who arrived in 1630; Robert Treat, a colonial-era governor of New Jersey; and Robert Treat Paine, a signatory of the US Declaration of Independence.[1]

He studied in Germany and the US, including at Yale and Columbia Law School, becoming a lawyer but seldom practicing.[2] He didn't need to work for a living, so he devoted most of his life to hunting, socialising, and womanising, as well as to services on committees and government projects, and to writing.

Grant is best known for The Passing of the Great Race, a 1916 book which claimed the Nordic race were responsible for everything great in human history, but were under threat from southern Europeans. The book was very popular, published by Scribners, and edited by Maxwell Perkins (who later worked with F Scott Fitzgerald and Ernest Hemingway); Theodore Roosevelt praised it as "a capital book; in purpose, in vision, in grasp of the facts our people most need to realize".[2][3] The book had a big influence on Nazi race theories; Hitler wrote to Grant "The book is my Bible".[1]

Grant believed that Blacks were valuable as long as they did what they were told; claimed the Irish were intellectually inferior; and called Slovaks, Italians, Syrians, and Jews "social discards", being particularly concerned by New York's increasing Jewish population.[2] He also worried about the southern and eastern Europeans bringing socialism and Bolshevism to the US, and the rise of communism among American Blacks and Jews.[4]

He proposed extreme solutions to racial mixing, including segregation, with ghettos for undesirable races administered through the public health system. He called for restrictions on immigration, serving as vice president of the Immigration Restriction League from 1922 to 1937 and advocating for the 1924 Immigration Act. He promoted mandatory sterilization of the criminal and insane. He agitated for anti-miscegenation laws, promoting a strict "one-drop rule" to prohibit any contamination of Nordic bloodlines. He influenced the redevelopment of New York to further ethnic and racial cleansing, such as getting the Bronx River Parkway to destroy as many Italians' and blacks' houses as possible.[2][3]

Grant wrote the preface to Lothrop Stoddard's The Rising Tide of Color Against White World Supremacy and later collaborated with Stoddard on the 1930 collection of essays The Alien in Our Midst: Selling Our Birthright for a Mess of Pottage, and in 1933 his second major book, The Conquest of a Continent, was published — a racial "history" of the US which blamed the decline of the Roman Empire on racial mixing and suggested America was heading the same way.

Grant was prominently involved in the eugenics movement, as president of the Eugenics Research Association and treasurer of the Second Eugenics Congress of 1921, whose attendees included Herbert Hoover, Alexander Graham Bell, and Charles Darwin's son Leonard (supporters of the first congress in 1912 included Arthur Balfour and Winston Churchill).[5][6] His book, The Passing of the Great Race, contained the following passage:

Grant campaigned for laws to protect deer from hunting, co-founded the Save-the-Redwoods League which prevented the last of California's redwoods from logging, helped found the Bronx Zoo, campaigned for the preservation of the American Bison, and was involved in the creation of Glacier National Park (in Montana) and Mount McKinley National Park (now Denali National Park, in Alaska).[2][1] He was a trustee of American Museum of Natural History. There is a caribou named after him, Rangifer tarandus granti (Grant's Caribou).

But he wasn't entirely nice to animals, being a member of big game hunting society the Boone and Crockett Club since the 1890s when he hung out with Theodore Roosevelt, and concern about a shortage of things to shoot was an important part of why he became a conservationist.[2] He mostly cared about beasts he saw as noble or aristocratic, rather than smaller more "inferior" species.[3]

And he wanted the Bronx Zoo to exhibit African Pygmies alongside animals.[1]

Grant's division between Nordic and Mediterranean types became less popular after his death, with Lothrop Stoddard's black vs white division being seen as more crucial. The whole Nazi business didn't help either.[1]

His combination of views are often used by those on the libertarian right who hate environmentalism to argue (in the words of Jeffrey Tucker, anarcho-capitalist and Bitcoin enthusiast[8]) that there is "a common trait between the people called environmentalists and racists from a century ago. They share a common outlook that is illiberal to its core. They imagine that a wise and powerful state can better plan a future for both nature and man."[9] While eugenicist and racist ideas were found in all sectors of society, attempts to lump Grant with Greenpeace overlook the fact that Grant with his love of hunting, fears about communist infiltration, and friendship with Theodore Roosevelt, had more in common with the libertarian right than the campaigning left, even ignoring his racism. There has always been a strong conservative element to conservation, just as left-wingers have perpetrated much damage to the environment.[10][11]

The “our precious bodily fluids” line from Dr. Strangelove was a satire on Grant's concept of "germ-plasm", which was what made Nordic people supposedly superior.[12]

The fictional book The Rise of the Colored Empires by "this man Goddard" mentioned in F. Scott Fitzgerald's The Great Gatsby is a reference to both Grant's Passing of the Great Race and his protegé Lothrop Stoddard's The Rising Tide of Color Against White World Supremacy (the introduction of the latter was written by Grant). Both books were highly popular in 1920's high society.

Grant is a frequent subject of glorification by the contemporary alt-right.

The first four maps are from Grant's 1916 book, The Passing of the Great Race, which could have been considered simplistic at best prior to modern genetics, but now would be regarded as entirely erroneous. The final map shows a modern genetic approach for haplogroups.