Number of the Beast

The Number of the Beast refers to a comment in Revelation that is supposedly a mark of evil. It is commonly associated with the Antichrist, especially in popular culture.

Traditionally, the Number or Mark of the Beast is 666; however various translations[note 1] give 616 as the proper number. 616 is, ironically, the area code of Grand Rapids, Michigan—birthplace of Amway.

13:16 And he causeth all, both small and great, rich and poor, free and bond, to receive a mark in their right hand, or in their foreheads:
13:17 And that no man might buy or sell, save he that had the mark, or the name of the beast, or the number of his name.
13:18 Here is wisdom. Let him that hath understanding count the number of the beast: for it is the number of a man; and his number is Six hundred threescore and six.

Most Christians are blissfully unaware that there are no single texts of "The Bible" as "written"[note 2] just after Jesus's death. Instead, what we have are copies of texts that are themselves translations into Greek and Latin. Commonly, there are 3 different sources for what most Christians accept as "The Bible".

And so what? Well, if you are a normal "I go to church now and then but don't really look for a 2nd coming" type of Christian, it's just an interesting fact about the nature of the Bible and how it was translated. If, however, you are trying to predict the End Of The World, or assign Anti-Christhood to particular darker skinned president(s) of relevant world power countries, and you believe that the Bible is inerrant, it suddenly matters a lot. All those kids with 666 in their Birth Certificate Numbers might be the wrong kids. We should have been looking at the kid born 50 kids earlier!

Scholars tend to believe the number refers to Roman Emperor Nero or to a different Roman Emperor. In both Hebrew and Greek, each letter of the alphabet also stands for a number; just as Roman numerals are formed by stringing a few specific letters together, so Hebrew and Greek numbers can be formed by stringing together any set of letters and adding their numeric values together. Consequently, any written word or name in Hebrew or Greek is also a number. The Latin for "Caesar Nero" can correspond to the number 666 in Hebrew, while the Greek for the name of "Emperor Caligula" can represent the number 616. The Emperor Domitian's name can also fit into the number 666, and it goes without saying that every word in the name of Ronald Wilson Reagan is 6 letters long.

Nero died in 68 CE and no worldwide cataclysm followed. The other Roman Emperors and Ronald Reagan died similarly without the world falling apart. 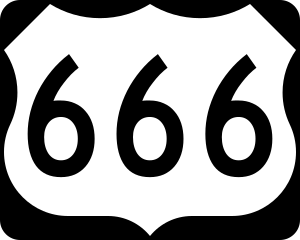 U.S. Highway 666 once ran through all four of the Four Corners states—Arizona, New Mexico, Colorado and Utah. It ran from the U.S.-Mexico border at Douglas, Arizona, to Monticello, Utah. It was formed by consolidating several state highways into one route.

The highway's new number didn't sit well with the mostly Mormon and fundamentalist Christian right-wing local population that it served. Also, because the even-numbered highway followed a north-south route in a country that tends to assign odd numbers to north-south highways, many locals thought that the U.S. Department of Transportation had gone out of its way to thumb its nose at God. (It didn't help that the individual state highways that formed U.S. 666 were among the most dangerous highways in the Southwest.)

U.S. 666 was quickly nicknamed "The Devil's Highway." In the 1980s, Utah and Arizona successfully petitioned the federal government to reroute U.S. 191—which had once served northern Utah—along several state highways in the eastern sections of their states. This plan included renumbering U.S. 666 as U.S. 191 between Douglas and Sanders, Arizona. This eliminated U.S. 666 in Arizona and moved the highway's southern terminus to Gallup, New Mexico. In 2003, after years of lobbying, the remainder of U.S. 666 was renumbered U.S. 491. Upgrading the highway to meet federal standards for U.S. Highway routes has reduced many of the old dangers, but it can still be a hazardous drive.

A serious cause for alarm among scholars.

Conspiracy theorists love to point out anything they see as the number of the beast to the world, even things that don't clearly contain sixes, such as the Google Chrome logo.[25]