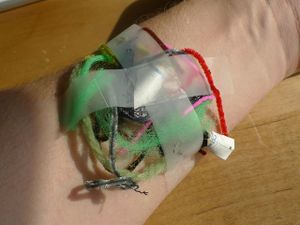 Morgellons is not an actual skin disease, but is in fact delusional parasitosis.[7] With this sort of condition, sufferers will be convinced that they are infected and compulsively itch and scratch their own skin to irritate and exacerbate perceived infections — and, of course, see exactly what they want to see if they remove anything.

Despite the lack of evidence that Morgellons is anything more than delusional parasitosis, "sufferers" in the US managed to successfully lobby the Centers for Disease Control (CDC) to investigate cases thoroughly; the results were finally published in January 2012. The CDC study was one of the most rigorous studies it had ever conducted; yet no infection, agent, or evidence of the disease was found.[8] The CDC deems the disease an "unexplained skin condition" or "unexplained dermopathy."[9] Sufferers say this is typical of a government agent trying to hide something.