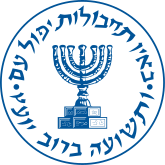 Booooring.
The Mossad is the main Israeli intelligence agency. Their mission is to gather intelligence and carry out covert actions on behalf of the State of Israel. They are also a lightning rod for conspiracy theories since they combine two of their favorite targets, Jews and the secretive world of intelligence gathering.