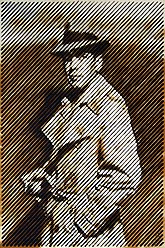 If you were looking for one of these, you're in the wrong place.

Private Eye is a fortnightly[note 1] satirical magazine published in the United Kingdom. It was founded at the time of the London satire boom

was commissioned by Richard Ingrams. Initially it was 90% humour, but under the editorship of Ingrams it rapidly became known for its anti-establishment views. Although it is widely viewed as left-wing, it has always maintained a pugnacious neutrality, revealing peoples' shortcomings regardless of their political slant. The proprietor was once comedian Peter Cook. Private Eye is currently edited by Ian Hislop, who is also known for his role in BBC television's long-running satirical news quiz Have I Got News For You. His editorship of the magazine has made him the most sued person in British legal history.[1]

It is very good on politics and the media, but rather less so on anything relating to science. It disgraced itself quite thoroughly by pushing the MMR vaccine hysteria well beyond all reason, apparently on the assumption that scientific disagreement is equivalent to political coverup for self-aggrandisement. At least they don't sell their MMR Special any more. Media Bias/Fact Check rates it "mixed" for factual reporting "due to the promotion of pseudoscience as well as mixing satire and real news that is confusing to the reader" (although the experienced reader probably knows the difference), and "left-center" in terms of political bias.[2]

Due to their desire to unearth any perceived government wrongdoing, coupled with a lack of scientific rigour, Private Eye spent most of the 2000s pushing Andrew Wakefield's line on the MMR vaccine as absolutely hard as they could. They quieted down towards the end of the decade and, when Wakefield was finally struck off, went so far as to publish letters calling attention to the fact and asking the magazine to, you know, actually apologise in some noticeable manner. Their response was utterly pissweak.[3]

In February 2010, Hislop commissioned a report into the Eye's coverage from their medical writer, "M.D." (Phil Hammond). It concluded that although the magazine was right to cover the scare when it first broke, it was far too blinkered when it came to accepting that there was no truth in the story.[4] So that's all right, then, they've cleared themselves. It's worth noting that Hammond's critique was Private Eye's second attempt at a mea culpa, the first one having gone down like a lead balloon for how it refused to acknowledge any meaningful failure on the magazone's part.

In 2018 Hislop named it the greatest mistake of his career at Private Eye, regretting he didn't accept the criticism early enough.[5])

Beginning with "Mrs Wilson's Diary" (after the wife of Prime Minister Harold) the Eye has usually run a spoof column containing the alleged ramblings of the British PM of the time (or close associate), including: "Dear Bill" (purporting to be letters from Margaret Thatcher's husband Dennis to conservative journalist William F. Deedes), the "St. Albion's Parish News" (the magazine of "vicar" Tony Blair's parish[note 2]), a series of "Prime Ministerial Decrees From the Desk of the Supreme Leader" complete with a faux-Soviet seal showing Gordon Brown in a military cap,[6] Dave and Nick as head and deputy headmaster of the New Coalition Academy (formerly Brown's comprehensive), The Cameron Free School with Dave as "sole headmaster", and now "St Theresa's Independent state GRAMMAR SCHOOL for Girls (and Boys).

Private Eye has provided several forums for stories which are not covered by the mainstream media as they rely on unattributed sources. This has led to more than a few libel cases.

The dubious goings-on and hypocrisy in central government with information from anonymous inside sources. (HP Sauce is a British table condiment which introduced generations of anglophones to the beauty of the French language: Cette sauce de haute qualité est un mélange de fruits orientaux, d’épices et de vinaigre.... The bottle carries a picture of the Houses of Parliament)

The dubious goings-on and hypocrisy in the newspaper industry (which was formerly based in Fleet Street) from anonymous inside sources.

The dubious goings-on and hypocrisy in regional and local government from anonymous inside sources.

The hilarious misquotes of TV & radio sports commentators (inspired by the BBC's David Coleman) but now including other factual broadcast material.

This is a collection of clippings of pretentious press releases, journalism and academic papers etc, often sourced by the public. Written releases/guides to art exhibitions make a regular appearance, as does post-modernist obscurantism.

The crossword, set biweekly by "Cyclops" in traditional British 15 x 15 cryptic form, is particularly politically snarky, nudge-nudge-wink-wink schoolboy naughty (mostly in the clues), and full of inside jokes such as "Brenda" standing for Our Brave Queen, Elizabeth Regina.[7] This is a prize crossword, and the prize —£100— is worth having.

The magazine has a substantial letters column, often consisting of three or four pages. This is often filled with a series of running gags, some of them only clear to frequent readers. Occasionally the letters are written under obvious and humorous pseudonyms.

Private Eye does publish a large number of critical letters, but even these often include catchphrases such as "I will be cancelling my subscription."

The magazine has been involved in some high profile libel trials, some more justified than others. These have often provoked debate about British libel laws and the freedom of the press vs the right of people not to be lied about.

A libel case was brought by Financier (and future Brexit campaigner) James Goldsmith in 1975-76. The Eye falsely claimed that Goldsmith had been part of a conspiracy to obstruct justice to aid Lord Lucan escape the UK after he murdered his nanny. He used an obscure aspect of English libel law to sue the magazine's distributors and even newsagents selling it and tried to bring a private prosecution for criminal libel, an old statute which hadn't been invoked for 50 years which could have led to the Eye's editors being jailed.

The magazine set up a fundraising campaign. Goldsmith's business rival Tiny Rowland donated a large sum to the Eye's defence. The case was ultimately settled with Private Eye taking out an ad in the Evening Standard acknowledging there was no truth to their claims, offering an unreserved apology in return for Goldsmith waiving any damages, paying a significant portion of his costs.[8]

Goldsmith later went on to win £85000 in libel damages against Private Eye for falsely alleging an association with Roberto Calvi, 'Gods Banker.'[9]

Another case that won a lot of publicity and fundraising was against Sonia Sutcliffe, the ex-wife of serial killer Peter Sutcliffe.

She sued the Eye and several other newspapers in the late 1980s for alleging she had sought to profit from her husband's crimes. Losing one of her suits prompted Ian Hislop to say "If that's justice, I'm a banana", but a vast fundraising effort helped save the magazine. Eventually, evidence proved she did what was alleged, and she lost a later case to the News of the World in 1990.[10]

Although trivial in legal and journalistic terms, this is perhaps the most famous of all its cases (Pressdram being the Eye's publisher). In 1971, a brief and obscure story (alleging James Arkell, of TV-to-leisure group Granada, was receiving kickbacks from a contractor) led to threats of legal action. The Eye's reply has gone down in legal history and is still widely referenced by lawyers in less formal documents:

We acknowledge your letter of 29th April referring to Mr. J. Arkell.

Ever since then "We refer you to the reply given in the case of Arkell v. Pressdram." has become a polite means of dismissing complaints.[11]

Private Eye has also been accused of falling prey to the biases of editors and writers. Hislop is a practising Anglican and in some ways socially conservative.[12] However, Hislop is also a long term BBC presenter, and the magazine attacks the British Conservative Party with as little restraint as any other.

There is a strong link between fogeyism and English satire, with Eye legend Christopher Booker moonlighting as a cultural critic whose book The Neophiliacs "bemoaned social developments as varied as rock’n’roll, supermarkets, liberalisation of the gambling laws, and James Bond movies".[13] Anything "woke" is bad, but so are most of the other enthusiasms of the young. Philip Hensher believes that its readership consists of the following, without providing any statistical evidence:

Former editor Richard Ingrams was notorious for homophobia and antisemitism, for instance declaring that Jews should be forced to declare their ethnicity if commenting on the Middle East.[15] Under his editorship, the Eye was opposed to gay rights and published a lot of salacious stories about gay people in public life.[16][17] It often targeted gay people who did bad things, such as Jeremy Thorpe

, the MP accused of conspiracy to murder, but its approach to them was nonetheless homophobic; and it's hard to justify a front cover saying "How many pooves are there in Wilson's government?".[18]

After Ingrams' hostility to feminism and homosexuality, the Eye has become more accepting of gay people and women. Private Eye frequently lampoons media and public figures for political correctness, and some critics maintain it has a problematic relationship with the LGBT+ issue.[19]

Private Eye has taken a complex stance towards the EEC/European Union and UK membership of it. It has a regular feature called EU-balls which satirises Brussels bureaucracy, but it has also been highly critical of Brexit, Nigel Farage and UKIP.

Perhaps because of getting its fingers burnt over the MMR Vaccine controversy (see above), Private Eye has been largely uncritical of the international response to Covid. It has reported on corruption in PPE and NHS contracts, but not on the involvement of the World Economic Forum. It does report on corporate tax avoidance, but has not mentioned how little support small UK businesses were given during Covid lockdowns.

It really doesn't like any tightening of rules on what newspapers can say, and was strongly opposed to the Leveson Report. Since then, it has taken every opportunity to attack anyone supportive of Leveson's conclusions, including actor and campaigner Hugh Grant

, and campaigner and businessman Max Mosley

It has also seemed strongly opposed to others who try to circumvent the traditional press, taking a strong dislike to Julian Assange and Wikileaks.[22][23]

Private Eye's logo is a parody of the Daily Express's Crusader logo.