Constant edit-warring and tone policing by Nerd on WIGO World (most of these 13 revisions), and, ludicrously, on the United States of America article, believing that some random factoid is of such great importance that it needs to stay in the article. Apparently he believes RW needs to be neutral and objective, contrary to our SPOV. Oxy and I have been arguing with him but he just won't listen, so I'm bringing it to the coop. I've had enough for one night. Goodnight! Avida Dollarsher again 20:47, 2 June 2019 (UTC)

Neutral no, Objective yes. If this website is going to ditch objectivity, then I'm out. I have no desire to be part of an echo chamber seeks to gleefully emulate Conservapedia. ☭Comrade GC☭Ministry of Praise 21:17, 2 June 2019 (UTC)

I think it is slightly absurd that the factoid involving states beginning with M is deemed relevant. Pretty sure it could be dealt with on the talk page though. — Dysk (contribs) 21:29, 2 June 2019 (UTC)

Not coop worthy, but we can tell Nerd to knock it off. If he likes neutral Wigo entries, I suggest he find some good Wigo and have the reward of customizing as he wants. --It's-a me,

Agree with Dysk and LGM. Nerd goes way too far with the tone policing sometimes, but that's a talkpage problem, not a coop problem.

@Nerd @GrammarCommie @Bongolian What Ace and the rest of us have been saying, the consensus is clear on this. Fuck off with your tone policing. — Oxyaena Harass 05:19, 3 June 2019 (UTC)

Frankly, I haven't paid a whole lot of attention to WIGO, but that does sound like a reasonable policy. Is it stated somewhere, or is it a matter of tradition? Bongolian (talk) 05:27, 3 June 2019 (UTC)

@OxyaenaAt no point during this Coop did I call for tone policing. In fact, I have posted once prior to this post and that was in response to "Apparently he believes RW needs to be neutral and objective, contrary to our SPOV." I would kindly request an apology by you for putting words in my mouth. ☭Comrade GC☭Ministry of Praise 12:25, 3 June 2019 (UTC)

on the wigo score, i am with nerd. aside from anythng else, i quite dislike being told how i should feel about some news story. its usually pretty clear how you would be expected to view a piece, for or against, that i dont need an aside that comes under the no shit sherlock category. a piece about trump saying something stupid doesnt need to tell me trump a dumbass when its the whole point of the piece. i know im not the sharpest tool in the box, but for fucks sake, credit me with some intelligence. if i disagree with the leaning, a quip isnt going to change my mind. if the wigo cant speak for its self its a bad wigo and its not the place to nail your colours to the mast. if there is something specific point you want to make it, theres the talk page for that. AMassiveGay (talk) 15:40, 3 June 2019 (UTC)

Agreed. On the matter of state names initiated by the letter M (the most for any letter), that this is interesting to someone is at least interesting in itself. The letter N comes in a close second with 6. Together they represent 26% of state names and only 8% of the alphabet. Surely this means something to someone somewhere? I second the motion to archive.Ariel31459 (talk) 17:38, 3 June 2019 (UTC)

honestly unless the wigo is outstandingly offensive I don't see the justification in editing it. WIGOs have always been about posting something you think is clever/interesting and then measuring your e-peen according to the votes it gets. As far as the letter m... There are a lot of weird facts we can throw in the article, best to save only the funniest/most missional ones so it doesn't get cluttered"Shut up, Brx." 18:10, 3 June 2019 (UTC)

I agree with Brx. Also, in the interest of full disclosure, one of the WIGOs Nerd edited was mine, and I like it the way I posted it.

Is this even a good faith editor?[edit] 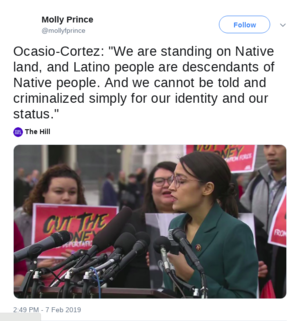 You can call it whatever you want, Oxy. But racism is racism, regardless of whom it is directed in favor of or against. Anyway, can we let this one go? The source link is dead, so the whole sentence got removed. Nerd (talk) 18:43, 3 June 2019 (UTC)

The problem is not all Latinos are descendants of Native Americans, quite a few are purely of European descent. Puerto Ricans themselves have barely any Amerindian DNA in them. — Oxyaena Harass 19:17, 3 June 2019 (UTC)

@Nerd Maybe not call her a racist this time, capisce? — Oxyaena Harass 19:39, 3 June 2019 (UTC)
1) I do think that Nerd is editing in good faith. 2) What AOC said in that statement is what could be called racism. Does a single statement make one a racist? I don't think so. 3) The reason why that statement is dubiously racist is: 4a) Guatemalans (for example) never had a traditional right to live in what is now the US. US Native Americans have additional rights because of treaty obligations, which at least in principle have the the force of international law. These treaty rights pertain only to official treaty members and are heritable, but not strictly genetic (hence the Cherokee have such rights despite substantial mixing with whites and African Americans). But 4b) Latino is a very broad category including some indigenous people, mixed indigenous people (such as presumable AOC), Afro-latinos, recent (e.g. Italians to Argentina) and long-ago European migrants, as well as Jews and Palestinians who migrated into Latin America. Bongolian (talk) 19:43, 3 June 2019 (UTC)

@Oxyaena It appears this lady wants to dig up a can of worms known as people's racial histories. It is my personal opinion that a wiser strategy would be to try our best achieve equality under the law and ignore inconsequential things such as sex, gender, color, race, or ethnicity. But sure, I won't call her "racist" or "discriminatory" even though, frankly, a rose by any other name would smell just as sweet, as I explained above. Instead, I will let people think for themselves. In exchange, I'd like you to stop throwing swear words at me. I will treat you, and everyone else, the way I want to be treated. Do we have deal? Nerd (talk) 19:47, 3 June 2019 (UTC)

This is all talk-page argument. As far as I can tell, Nerd creates considerably more main space content than his detractors. There are almost no "good" editors in the sense of being capable of editing an authentic encyclopedia. But this is not one of those, so how about that archive thing?Ariel31459 (talk) 19:45, 3 June 2019 (UTC)