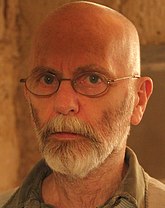 The progenitor of this racist conspiracy theory; Renaud Camus, in 2013 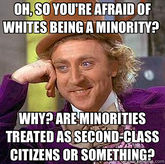 We're going to link this as many times as we goddamn have to.
Not to be confused with white genocide, which is the same garbage without the philosophical window dressing.

The Great Replacement (French: Le Grand Remplacement), called "replacement theory" by Tucker Carlson in an attempt to reframe the conspiracy for his more moderate audience, is a racist, Islamophobic, anti-semitic, white nationalist, far-right genocide conspiracy theory originating in France, which asserts that the white Christian population of either Europe, North America (United States and Canada), or Australia and New Zealand "is being systematically replaced with non-European people", specifically Muslims (including Muslim European Turks, Bosniaks and Kosovars) through mass immigration and low birth rates. All this courtesy of a global élite gang of conspirators, probably based in Brussels or for the more crackpot elements out there the Jews. The theory is used interchangeably with the white genocide conspiracy theory.

A study done in May of 2022 showed almost a third of all adult Americans believe in some aspects of the Great Replacement. [1]

[2] However, the same idea dates back earlier in the United States to a 1947 book by Theodore G. Bilbo

titled Take Your Choice: Separation or Mongrelization. Bilbo was a racist KKK Democrat demagogue from Mississippi who was Governor and then Senator of the state.[3] Roots of the replacement hoax arguably extend a century back, propagated then by white supremacist eugenicists Madison Grant, Lothrop Stoddard

Camus started out promoting white gay separatism in books such as Tricks: 33 Stories; according to Musab Younis:[5]

Being fucked by Arabs, Camus felt, was passé: what mattered above all was same-race, same-sex intercourse and the extinction of difference: white men who identified as gay should fuck white men, and do so in conspicuously gay spaces.

Camus based his racist theory on ideas put forward in the 1972 book The Camp of the Saints,

a novel by Jean Raspail, which describes "mass immigration destroying Western civilization" (and which enjoyed a renewed burst of popularity around 2011), and the Eurabia conspiracy theory. He formed the curiously-named political party "Party of No-harm" (French: Le Parti de l’In-nocence), which pushes a mix of left- and right-wing policies to no electoral success.[6] Today, Camus is the acceptable face of anti-immigrant and anti-Muslim politics, appearing "plausibly high-minded, principally aesthetic, even well-mannered"; historian Mark Lilla called him "a kind of connective tissue between the far right and the respectable right".[7]

One of the common talking points is that the number of non-White babies born has been increasing. This entirely ignores the definition of "White", and relies upon an extremely racist form of special pleading known as "the one-drop rule". Why should the child of a White man and Black woman be "non-White" instead of "non-Black"? If you have a town that's made up of 50% Irish and 50% Italians, and everyone marries randomly, only a quarter of couples will be Irish-Irish and another quarter Italian-Italian and half will be Irish-Italian, and if we repeat the process only 1/16th will be pure-Italian, and then 1/256th in the next generation. Were all the Italians "replaced" by spud-munchers, or is the town still half-Italian? So too with "non-White" people; of course the number of babies without any "non-White" ancestors will decrease over time in a free society.

See the main article on this topic: Christchurch terrorist attacks

The Australia-born Christchurch terrorist attacks shooter Brenton Harrison Tarrant named his manifesto after this theory.[9] Although the manifesto contained numerous references to the Great Replacement theory, the majority of the manifesto consists of a mix of unrelated white nationalist talking points and alt-right propaganda taken from the internet. The reaction to the manifesto attracted attention to other groups using comparable rhetoric, and led to Facebook banning white nationalist propaganda from their platform.[10]

Patrick Crusius of Allen, the perpetrator of the shooting at a Walmart store in El Paso,

Texas was also influenced by the theory, and mentioned in his manifesto The Inconvient[sic] Truth a supposed "Hispanic invasion of Texas" and claimed he was "simply trying to defend my country from ethnic and cultural replacement brought on by an invasion" as well as praising the aforementioned Brenton Harrison Tarrant and his manifesto. Additionally, Crusius also read Tarrant's The Great Replacement manifesto.[11]

in Europe, North America, Australia, and New Zealand is a major promoter of this theory.[12]

Another shooting that happened in Buffalo, New York, was caused by Payton S. Gendron, who wrote about the Great Replacement in his manifesto.[14]