From RationalWiki
(Redirected from Crustal displacement)
Jump to: navigation, search 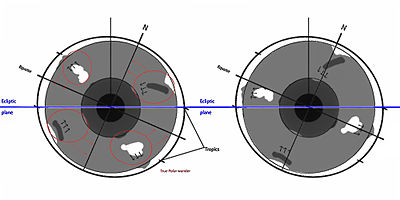 Hapgood also appears to think this means somehow Earth's crust would suddenly change direction randomly instead of obeying Newton's first law of motion and continuing to rotate in the same direction. To give an idea of the forces that would be involved, one hypothesis proposed to explain the Martian dichotomy