From RationalWiki
(Redirected from Shootag)
Jump to navigation Jump to search 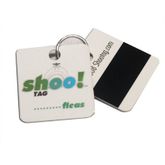 Shoo!Tag (also Shoo!Bug and Shoo!bug TAG), and now re-branded as 0Bug!Zone [note 1] to avoid certain legal issues (see Fraudulent studies) is a pest-control product. Well, not really. What it really is is a particular instance of woo that claims to harness "Nature's energetic principles in combination with physics, quantum physics and advanced computer software technology" to "[utilise] the power of the bio-energetic field which surrounds all living things to create a frequency barrier which repels targeted pests for up to four months."[1]

Its makers even had the gall to include a "science" page on their website to bolster their claims,[2] that was subsequently replaced with a content-free poo-pooing of science page ("Science Schmience") from 2011-2016.[3][4] Yes, you or your animal will be using The Force to repel insects. Oh, and quantum. Did we mention quantum theory enough?

Desiré Dubounet at the 2010 Biofeedback & Wellness Congress in Cancún

Energetic Solutions Ltd, a company which initially developed homeopathic creams for stress reduction, "invented" the Shoo!Tag.[5] Sisters Melissa Mowrer Rogers and Kathy Heiney[5] of Wimberley, Texas,[6] who worked in the "quantum biofeadback[sic] industry", founded Energetic Solutions in 2003.[7] Rogers and Heiney are linked to "Professor" William Nelson, "quantum bioenergetic healing" magnate and inventor of QXCI/EPFX/SCIO "biofeedback" machines.[8] Nelson is currently wanted on nine counts of felony fraud by the United States Food & Drug Administration.[9] The US Patent application for Shoo!Tag lists as its inventors Heiney, Rogers and Nelson (under the name 'Desiré Dubounet').[10]

In April 2011 Energetic Solutions announced a donation of $30,000 worth of Shoo!Tag products (their "people" tags) to the Family Legacy Camp LIFE mission in Zambia "to assist in providing relief from mosquitos[sic] and contribute to the prevention of disease among Camp LIFE participants this summer".[11]

As of 2010, Shoo!Tag started marketing under the name of "Shoo!Bug", with a more definite pitch towards human efficacy.[12] Starting in 2015, the product was rebranded again as "0Bug!Zone".[13]

Beyond anecdotal evidence there is nothing to suggest that the Shoo!Tag works. The manufacturers have provided no real data that would assess how well the tags perform, if they perform at all. This suggests they do not actually work, as an actual trial appearing to show poor performance would be damaging to sales.

The science, as the website explains it, was complete and utter crap. Any attempt at a scientific explanation has now been largely removed from the Shoo!Tag site. The assumption must be that Energetic Solutions has grokked that their far-fetched 'quantum' explanations are more of a liability than just some general dissembling about 'energy fields'. It appears that they have new PR people giving them advice.

All things are composed of atoms that are mostly electrons and protons.[note 2] In between the electrons and protons and in between the atoms is mostly empty space, filled with magnetic static, quantum and gravitational fields. The science of voltammetry tells us of the electrical principles of all biological entities. Our research has shown that subtle inductance/capacitance fields (magnetic and static) can have dramatic effects on biology.

The only true measurement in electricity is the voltage and amperage, everything else is a mathematical variation of the two. These calculations are referred to as virtual or mathematical measures. Variations in flow of amperage and voltage give us a way to measure capacitance, inductance and frequency. These measurements reflect the static and magnetic effects of bio-electricity.

Shoo!TAG™ represents a paradigm shift in the pest management industry. Shoo!TAG™ utilizes an understanding of Nature's energetic principles with combination with physics, quantum physics and advanced computer software technology. The key to Shoo!TAG™ is the three dimensional electromagnetic static field embedded in the magnetic strip.

Introducing the Shoo!TAG™ into the body’s electrical field produces an expanding barrier effect, keeping away the targeted pests. Shoo!TAG™ is leading the way in managing pests while being safe for pets, people and the Planet.

Shoo!TAG™ utilizes the power of the bio-energetic field which surrounds all living things to create a frequency barrier which repels targeted pests for up to four months.

Shoo!TAG™'s magnetic strip is encoded with beneficial frequencies and resonances and an electromagnetic charge bearing a polarized energy signature, which when introduced into the bio-energetic field of the wearer produces results.

There really are few words for how much bullshit is contained within those explanations. While electroreception has been observed and has been used to deter animals, this is almost entirely confined to aquatic animals, rather than flies. In addition, fairly high power is needed to deflect animals and the weedy little field produced by a non-powered magnetic strip isn't going to bother anything. However, no trials have really been done on the tag and no RationalWikian has thought about buying enough to launch our own trial (as fun as this would be). However, Santa Fe Sandy, who is quoted above as being quite happy, has made other posts claiming that they're "just not cost effective" and that they "lasted 5 weeks" when they were supposed to last several months.[16][17]

In February 2011, Energetic Solutions claimed to have carried out field trials, 'monitored by Texas A&M University' that yield a '74% reduction in mosquito bites'. Neither the trials, nor the boast of the University endorsement carry credibility.[18] The university endorsement was removed from their site in April. In August or September 2011, all other references to the Texas A&M trial were removed (including a video mini-documentary that previously featured prominently on the front page).

Shortly afterwards, the claim of a new experiment appeared on the Shoo!Tag site. A linked pdf letter, endorsed by an assistant professor at Texas State University and on a TSU letterhead, synopsized the experiment and claimed impressive results (quoting statistics that were almost identical to the Texas A&M University trial).[19] Texas State University was unaware of the endorsement[20] and they apparently requested that any reference to the experiment under their name be removed from the Shoo!Tag site as the hotlink to the document was killed in October.[21] As of late October the document itself was still there as recently as 2016.[22]

To avoid these Nazi oppressing sciency people, Shoo!Tag re-branded their product to 0Bug!Zone, with exactly the same fraudulent recommendation letter right there on the front page, which is live as of 2020.[23]

Specifically, there is some fractal wrongness in the claims made. Each point makes the preceding one completely irrelevant.

The Shoo!Tag FAQ[25] offers numerous escape hatch arguments for when the tag doesn't work. For instance, the FAQ claims that tags require 24-36 hours to "extend the pest barrier frequencies into the animal’s entire energy field". Even if this phrase wasn't just bullshitting, the delay would give an ample excuse for seeing poor performance from the tag after trying it on. Such a delay would also pose problems for anyone using the "human" tag, which seems to be marketed towards hikers and campers who don't necessarily want the 36 hour warm up period before the repellent starts to work. As the frequency of mosquito pests varies over time, any low points would be attributed to the tag and any times where they don't seem repelled would assumed to be because the tag hadn't had time to "extend the pest barrier frequencies" yet. In addition to this relatively short delay, the FAQ also states that, as the tags don't actively kill pests, it's possible to still see them for some time after first pinning them to yourself or your animal. While this is an understandable claim, it is awfully convenient and may cause pet owners to resort to conventional chemical means to rid their pet of ticks and fleas; and eventually attribute the lack of pests to the tag, rather than the chemicals.[26]

The FAQ also offers the explanation that the tag may not work if it "is near or has been near a strong frequency (cell phone towers, electric transformers, fault lines, electronic home security systems, etc.)" If the ubiquity of cell phone towers isn't enough, the 'or has been near' and 'etc' leave a hole big enough to drive a truck through (for instance: maybe the courier delivering the tags drove under a cell phone tower — you get the drift). The FAQ previously mentioned geomagnetic anomalies as a possible source of interference with the Shoo!TAG efficacy, but that excuse has now been removed (in keeping with the constant revisionism[27] at work on the Shoo!TAG site).

However, there is one very good point raised by a blog commentator:

Further investigation appears to show that it is simply impossible for the tag to work,[29] unless the mechanism is something other than what is claimed. For example, if the tags actually carry a dose of flea repellent chemicals, then they would "work": but not in the chemical-free way that the sellers use in their marketing.

The "active ingredient" is the data on the magnetic strip. Ones and zeroes are not harmful to ticks or fleas. The data on the card is a few standard formatting characters, a few numbers, and the words "TICK" or "FLEA" respectively.[29] It stretches credulity that insects might be scared by names humans gave them, written in English, encoded into a form of ASCII called DEC-SIXBIT, which is then recorded as three rows of magnetic dashes. That's like saying "mix a ground magnet with your printer ink, print out the word 'FLEA', and tape the word to your pet's collar, and it'll ward them off." One could argue that maybe the magic is in the numbers that haven't been decoded yet.

In an apparent effort to deflect criticism of the above investigations, as of April 2011 the ShooTag FAQ has carried a claim that "Customers can take their shoo!TAG® to any retailer that carries a magstripe (credit card) reader and swipe it through. The type of tag (i.e. fly, mosquito, tick) will show up when scanned." This is demonstrably a blatant lie. The card, when swiped, will, on standard credit card readers, throw an error. The FAQ continues: "If there is no name, then the shoo!TAG® tag has lost its efficacy." What this means in effect, is that anyone who doesn't know better will swipe the card and assume their card has expired. It seems self-evident that the manufacturers of ShooTag would not find such a test desirable, in any case. As most people know, credit cards will last for a lot longer than 4 months, the stated maximum period of effectiveness of the Shoo!Tag. In addition to this, the Shoo!Tag patent application explicitly says that "…the trivector data stored on the three tracks (of the tag's magnetic strip) is not readable by a conventional credit card reader."[10][30]

Further to the preceding paragraph, as of June 2011, this section of the shoo!TAG® FAQ has been amended once more, in a presumed additional effort to bring observed behaviour of the tag when swiped in line with claims in the patent. Specifically, a differentiation has been made between the supposedly 'effective' data on the tag and the data defining the ASCII characters such as 'tick', 'flea' etc. Simply put, the ShooTaggers are inferring that The Tetherd Cow decoding of the tags is irrelevant, because the names of the pests were put there on purpose to 'help' the customer, and the true efficacy is in all the other data. The fact remains that swiping a supposedly active tag within the four month efficacy window still throws a read error.

Like most woo products, the Shoo!Tag isn't entirely harmless as described. Not least due to the standard woo caveat of people avoiding and distrusting proven mechanisms.