Most commonly, homeopathic remedies are herbs or extracts, but the practice has no shortage of odd and unusual remedies that proponents also claim cure a whole host of illnesses and obscure maladies. Because the process of succussion, the diluting and shaking/striking an ingredient in water or alcohol, is carried out dozens or hundreds of times, these active ingredients are normally never actually present in the final remedy — hence why they can get away with strange — and often dangerous — ingredients.

In 2009, the School of Homeopathy decided to do a proving on a mammal, as something like that had never been tried. Eventually, the decision was made to do this with a badger, mostly because the animal represented a bit of "English character" (what, were they trying to cure English character?), although the logic behind this stemmed almost entirely from The Wind in the Willows.[1] Apparently, homeopathic roadkill badger makes you randy.[2]

A 4-year-old boy was reportedly treated with a homeopathic remedy from rabid dog saliva (known as Lyssinum or Hydrophobinum) to treat his aggression and growling in preschool.[3] The boy had reportedly been previously bitten by a (presumably non-rabid) dog in the past,[3] leading to naturopath Anke Zimmermann of Canada to prescribe this treatment.

See the main article on this topic: COVID-19 pandemic

A naturopath in California, Juli A. Mazi, was arrested in 2021 on federal fraud charges for allegedly selling $243 homeopathic pellets that Mazi claimed would prevent COVID. She also sent fake immunization cards with the pellets. Mazi claimed that the pellets contained small amounts of the virus.[4][5] In 2022, Mazi's colleague in the scheme, Jaimi Jansen, pleaded guilty "to three counts of providing false statements related to health care matters."[6] The pills were labelled as "homeoprophylaxis immunization".[6] "Homeoprophylaxis" is a new crackpot idea within homeopathy that claims to prevent rather than treat.

The south pole of a magnet[edit]

No, homeopaths haven't been the first to stumble upon magnetic monopoles, they have genuinely made a remedy from a magnet. Although there is little information on what was actually taken and diluted, there is plenty of information on what the remedy supposedly does from its proving. Indeed, it'd be easier to say what Magnetis Polus Australis doesn't cause or cure.[7] 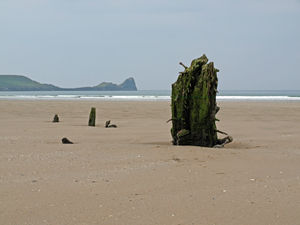 Dissolve ship in water and succuss against rocks 1010 times

In 1887, The Helvetia was caught in a storm and ran aground in Rhossili Bay, Wales. A century or so later, homeopathic expert Mary English decided to try and prove the remains of the wreck as a homeopathic dilution. Diluting a scraping of the wreck to 30C, she gave it to 7 people and determined that the wreck could cure a "sense of stuckness" — as many of the provers were having problems getting stuck in traffic during their long commutes.[8][9]

Another entry from the baffling world of Mary English, a homeopathic remedy was made of the Stanton Drew stones, the second largest stone circle in England (after Avebury, by diameter, not the more famous Stonehenge). The proving was done between 2001 and 2004 with a mix of 12 men and women. It might be worth noting that it is an offense to cause any damage to a scheduled monument without consent under the 1979 Ancient Monuments and Archaelogical Areas Act, as noted on Mary English's website. Luckily, the remedy was made by collecting a few loose fragments of stone, and with a 6C dilution factor, there should be more than enough to go around to whoever wants some.[10]

No, really. For the reasonable sum of $29, you can get a book throroughly describing the proving of a plutonium-based remedy.[11][12] Of course (albeit a minor point), the availability of said remedy, given its heavy regulation world-wide, is left up to the consumer to figure out. 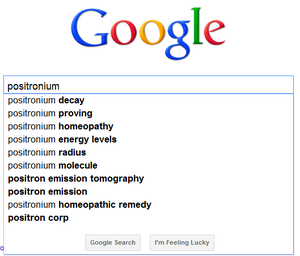 In 1998 a homeopathic remedy was prepared by exposing a solution to the gamma radiation produced by the annihilation of positronium — an exotic atom-like structure containing an electron and its anti-particle, a positron. According to the description supplied by authors, positrons were produced by beta-plus decay of sodium-22, then passed through a nitrogen gas cell to form positroniums.[13] As soon as these came shooting out of the nitrogen, they hit a metal plate, where they annihilated and produced 511 keV gamma radiation, which in turn irradiated some ethanol. Thus, the remedy never even came into contact with any antimatter — only with the radiation from its decay. Positronium is said to have themes of calming.[14] 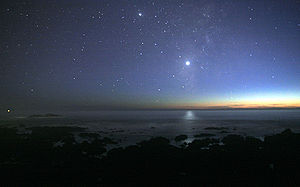 Ping! You can now cure… erm, "feeling a bit iffy".

Surely it can't get weirder than this? The remedy Venus Stella Errans didn't even require dissolving anything as it was made entirely from the focused light of the planet Venus — similar to the old joke about making a Martini by shining a sunbeam through a bottle of vermouth. The Principle of Similars seems a little confused about this sort of thing; exactly what symptoms could be caused by the light of Venus? Luckily, the author of the proving explains:

Not only is the concept of using light as your active ingredient a little stupid (light doesn't affect water much, we'd quite obviously know otherwise) as well as the fact that all light is identical — save a few spectroscopic differences due to the absorption in Venus' atmosphere — but the remedy available is diluted to an immense 200C.[15]

Probably the crowning achievement of the homeopathic arts, there is homeopathic water available. However, just diluting and succussing water itself would be silly; this remedy is a succussion of "new" water, that is, water newly formed by reacting hydrogen and oxygen. Of course, this makes no sense in any way, shape or form. Anyone with any knowledge of chemistry will know that water is water is water, with no possible difference.[16]

And the homeopaths finally admit it — the remedy excrementum tauri is bullshit. Literally.[17] This is not to be confused with feces therapy, which is the real shit, not that watered-down crap.

Villagers in modern day Henan province in China have been grinding dinosaur fossils for use in homeopathic tonics. The bones have been ground up into tea for decades: a practice recorded to have occurred with ancient peoples across the world. When asked why so many Chinese still believe in dragons, China's premier dinosaur hunter responded, how many Americans still don't believe in evolution?[18]

What is going on here[edit]

Since homeopaths can't really do research in the conventional sense they have to fall back on provings if they want to feel that they are advancing the field of homeopathy. The result is a lot of provings. Most are rather boring, being a random selection of plants and simple inorganic compounds. They do however tend towards using Latin and obsolete names for things. For example the fairly popular "Natrum Muriaticum" is table salt.

In practice most homeopaths tend to stick to a fairly small number of remedies dating back to either Samuel Hahnemann or James Tyler Kent.