From RationalWiki
(Redirected from Warsaw Pact)
Jump to: navigation, search 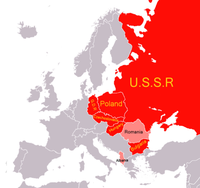 The nations of the Eastern Bloc, colored red with blood.

The Eastern Bloc — also known as the Communist Bloc and the Soviet Bloc — were the European communist nations during the Cold War. It is often confused with eastern Europe (geographical term), where the USSR was located, hence the vague and incorrect term Eastern Europe came to usage. Eastern Bloc consisted of countries of eastern Europe and allied countries of central Europe, the Balkans, as well as the Baltic states in the crossroads of central and northern Europe that were once under the domination of the Soviet Union. All of these nations were governed by communist totalitarian dictatorships.

The Soviets had little trouble establishing dominance over these nations, having invaded them at the end of World War II in pursuit of the retreating armies of Nazi Germany, then stuck around for decades after the war ended.

The Baltic States, which were independent between World War I and its sequel, were absorbed into the Soviet Union after WWII and were therefore not really part of the Bloc:

Countries that don't fit anywhere else on this scheme[edit]

Two other nations were originally aligned with the Bloc, but later established their autonomy: