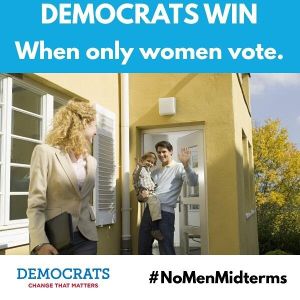 #NoMenMidterms is a manufactroversy created by 4chan's /pol/. Right-wingers created images that spoofed the campaign material of Hillary Clinton's 2016 presidential campaign and that encouraged men not to vote in the 2018 US midterms. The fake images expanded to cover race (asking white men not to vote with #NoWhiteMales) and the hashtags #LetWomenDecide and #OurTurn.

was briefly suspended from Twitter for posting a NoMenMidterms image as if it were real.[2] All uses of the hashtags were from conservative accounts,[3] including the fake "Neverland Antifa" account.[4]

Before being memed, the #LetWomenDecide hashtag had been sporadically used in support of Ireland's abortion ban repeal.

These bogus hashtags were preceded by the #WalkAway hashtag and the bogus claim that "Millions of Americans are walking away from the Democrat Party!"[5] Both Breitbart and Epoch Times falsely claimed that #WalkAway was a growing movement among Democrats.[6] The #WalkAway hashtag was alleged to have been started by Brandon Straka, an alleged member of the alt-right, on June 29th, 2018,[6][7] but its usage goes back to at least 2015.[8]

Straka was a speaker at the Donald Trump rally that immediately preceded the 2021 U.S. Capitol riot.[9][10] He was also charged with impeding law enforcement officer during civil disorder, and disorderly conduct.[11]