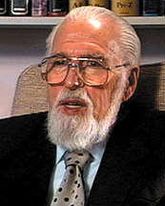 Rousas John (R.J.) Rushdoony (Armenian: Ռուսա Հովհաննես Ռշտունի) (1916–2001) was a Calvinist and considered to be the grandaddy of Christian Reconstructionism in the United States. He was a major proponent of homeschooling. His parents moved to the USA after fleeing the Armenian genocide.

Rushdoony is known for his works and commentary in Calvinist theology, some of his more famous works being By What Standard? and The One and the Many: Studies in the Philosophy of Order and Ultimacy. His 1973 book The Institutes of Biblical Law, is a blueprint for a Dominionist society and considered to be his most influential work.

Rushdoony also wrote a number of books on education and history. He promoted homeschooling in his writings as a way of teaching nothing at all corrective for the secular public schooling system. He was also a fan of the United States as a Christian nation myth (this time with a Calvinist flavor).

Rushdoony hated anyone who wasn't a white Christian. Racism, in addition to the Lost Cause of the South and other Neo-Confederate mythology, can be found throughout his writings. He was a Holocaust denier who accused the Jews of "bearing false witness." He also supported the death penalty for various "abominations" like being gay. This from a man whose parents fled genocide caused by bigotry.

But he was cool with divorce. His first wife, Arda Gent-Rushdoony, filed for divorce on account of his "extreme cruelty" and "inflicting mental suffering" on her. He won the lawsuit against the mother of his five children, taking the house, car, children and leaving her with $1/month of alimony. As he wrote in his Institutes of Biblical Law: "Divorce by death made remarriage possible, and freed the innocent partner from bondage to a guilty and unclean person."

Since the Bible is rather unequivocal that the only acceptable basis for divorce is infidelity on the wife's part, which was never alleged during divorce proceedings, Rushdoony's remarriage constituted bigamy, adultery or both in the eyes of God, according to his own purported beliefs. His actual respect for the Biblical law he claimed to want to live under is revealed by the fact that he never complied with its dictates on adultery by having himself stoned to death.