On Christmas Day of 2008, Andrew Schlafly — sore that the Bible doesn't lend exclusive support to his particular brand of nutjob conservatism — started his most important project to date, and what some most might consider his biggest insult to Christianity yet: Conservapedia's Bible Retranslation Projectimg renamed to Conservative Bible Projectimg.

Andy's Bible has the aim of altering updating the current English translations to make a new conservative Bible — you know, since the King James version is so damn liberal to begin with. 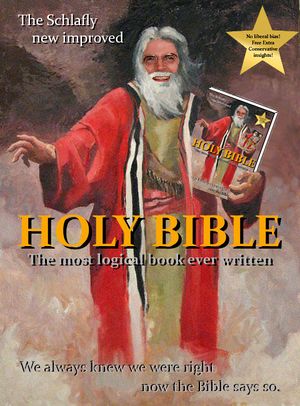 Despite poor descriptions by Schlafly of the means to be employed to re-translate the Bible, in its execution so far the project does not involve any substantial translation of the original Hebrew, Aramaic or Greek texts, or later translations of these such as the Greek Septuagint or the Latin Vulgate.

Rather, Schlafly has been altering the text of the KJV on a word-for-word and idea-for-idea basis to eradicate words and concepts that he feels threaten his personal concept of Christian Conservatism.

This is probably because, while claiming to have expertise in ancient Greek,[1] Schlafly seems to have a shaky grasp of it and may not even understand what language Jesus was speaking.[2] For those keeping track, a historical Jesus would have spoken Aramaic — while early Christian writers wrote in Greek.

One obvious consequence of his methodology is that Schlafly misapprehends the significance of words and phrases with idiomatic meaning in the Ancient Greek, particularly such as appear in the Pauline letters, and fails to include such meaning in his alterations of the KJV text.

And how is this a good idea, exactly?[edit]

The stated rationale behind the project is that English is changing (or "devolving" according to Schlafly)[3] so rapidly that the words in previous Biblical translations are no longer accurate (this is, somehow, not in conflict with his claim that new "conservative words" have been being added to the English language at a geometric rate).

Schlafly goes on to say that:

The project also focuses on the fact that several new words have entered the English lexicon since the original translations of the Bible and that these could be useful in adding new bias giving the translation more relevant meaning (naturally, these words include homeschool and conservative).

Presumably this means that by the time the project is completed, it will already be out of date and a new translation will be required to compensate for further devolution.[4]

The roots of the idea seem to lie in Schlafly's Conservapedia entry for Disputed Biblical Translationsimg, started earlier in December 2008.

In this he lamented that recent translations such as the New International Version have fewer direct mentions of Hell, the Devil and the divinity of Jesus Christ than are in the King James Version.

Of course in Schlafly's mind this is all about liberal creep and misappropriation, rather than anything to do with advances in classical scholarship over the past four centuries.

In aid of the project, Andy has listed twelve conditions that must be met by his conservative Bible bastardization version:


The gospel according to Andy[edit]

Examples of Conservapedian "restoration of the Bible's original intent" include:

Presumably this is because some wealthy Christians are uncomfortable with the literal interpretation of Jesus' quote about a rich man and an eye of a needle.

This is a common dispute with the commandment "thou shall not kill." Biblical Hebrew has several words that could be used for "kill," and the word used in the commandment (ratsach) is never used when referring to killing in war. Therefore translating the commandment as "thou shall not murder" is arguably closer to the original intent; but Schlafly's reason is probably to justify capital punishment, torture, and war mongering. But not abortion because he considers that "murder".

Due to Andy's hatred of "evil libruls", even using the word in a non political way, such as "give your cake a liberal sprinkling of icing sugar" is wrong. We wonder how words containing word roots of "liberal" ("liberate", "liberty") are addressed.

The official reason given is that "Grace" is a girl's name,[9] presumably leaving "faith", "hope", and "charity" yet to be reworded. In addition, If "liberal" can be replaced with "generous", would the word "grace", by syllogism, mean "boundless liberality" back then?

Covering up the rather embarrassing error of the original Evangelists, who confused the less rigid Perushim ("Pharisees") with the stricter Seduqim ("Sadducees") - possibly because Pharisees rivalled early Christians for mass support. As a bonus, it throws in a boilerplate modern conservative term of abuse against contemporary opponents, transforming a politico-religious dispute in 1st century Palestine into Jesus castigating those snooty latte-sippers. After all Conservative elites can't possibly be bad can they?

Is this real life? Is this just fantasy?[edit]

An alternative explanation is that the Bible Retranslation Project is just the sort of thing that happens when Internet kooks have too much wine and chocolate at Christmas, or when megalomaniacs stray further and further beyond the curtain of sanity.

Mau de Katt of Slacktivist made a comparison to the LOLCat Bible, noting that:[10]

Frankly, the LOLCat Bible seems to be to be a more accurate translation than the abomination that they propose!! And to those Conservapedia folks I say:

Unsurprisingly, the project was met with skepticism and criticism from some Conservapedia editors, which was dismissed contemptuously by Schlafly. The article's talk page makes for some interesting reading, particularly a series of posts in which Andy, responding to comments that his "translations" contradicted accepted Biblical and linguistic scholarship, entirely debunked the concept of expertise.

Sure Andy, those "experts" talking about global warming are exactly the same people as the ones who translate ancient Greek and Hebrew.

Subsequent comments by Andy continued to emphasize "thinking for yourself" (a euphemism for agreeing uncritically with Schlafly) as a more reliable method of translation than actual knowledge or study of ancient languages.[14] They also showcased his delusions of grandeur swelling to absurd proportions and his tenuous grip on reality faltering.

Both the discussion and the project itself initially fizzled out during early January 2009. Schlafly's biggest supporters on the talk page had been parodists (Bugler and RodWeathers), who have subsequently been exposed and left the site. The other major contributor has been DeniseM, an editor with a good knowledge of Hebrew, Greek and other languages, who has made a start on translating the Book of Esther.[16]

Andy seemed to have largely lost interest in the project, probably due to his short attention span and the many other subjects demanding his "insights". Quite possibly he also realized that he was out of his depth, when confronted with questions like "how do people here render ויהי בימי אחשורוש הוא אחשורוש המלך מהדו ועד כוש שבע ועשרים ומאה מדינה?" and "How do people want to transliterate אֲחַשְׁוֵרוֹשׁ?" from DeniseM.[17]

The translation of the New Testament was completed on April 23, 2010 by the best of the public.[18] However, when Andy's interpretation of the scriptures is questioned using the Conservative Bible [19] Andy will make improvements in order to rectify the matter.[20][21]

Improvements are also made whenever his next insight[22] requires Biblical verification[23] or pet theories lunacies require Biblical proof, for example[24] disproving relativity.[25] Anyone else doing the same is reverted and blocked for vandalism.[26]

By August 2009 DeniseM and her awkward scholarly questions had disappeared and the concept was resurrected. Andy realised there was no translation of the bible which met his definition of a conservative translation, so he set himself the lofty task of creating his own.

The prevailing logic of the reinvigorated exercise is that when the King James Version was first printed in 1611 they did not have access to his "powerful" list of new conservative words that Schlafly spent the first half of the year compiling, which they would have surely used to express the bible's conservative and free market ideas. The only problem was that without being well versed in Hebrew or Koine Greek the Conservapedians could not do a proper translation.

As a result, Schlafly and a small but committed cadre of parodists now have the stated goal of "translating" - more accurately, rewording - six verses of the KJV each day, which will enable Mark's Gospel (the shortest of the four) to be made fully conservative within four months. The talk page is full of optimism, and includes such revolutionary insights as improving on "Holy Spirit" with "Divine Force".

Bits of other books of the New Testament have also been attempted here and there, including half of the letter to Philemon - finally, someone has opened their eyes to the obvious socialism in Philemon verse 1[27] and removed it. Unfortunately, at the time of writing, this translation stops just short of the phrase "mine own bowels".

Given how Conservapedia hangs on to every word of Joseph Farah's WorldNetDaily as newsworthy, it must have come as quite a surprise when somebody who is, theoretically, Schlafly's target market lashed out at the project.[28] Farah described the project as "incredibly stupid and misguided", "nutty", a "trivialization and politicization of the Scriptures" and a "profoundly dangerous practice spiritually". He also had a dig by referring to the authors, Andrew Schlafly and TerryH, as "conservatives" (using the inverted commas).

Schlafly's response was to call Farah's comments "over the top",[29] and TerryH went one step further and drafted a long, rambling screed defending their actions. Armed with a pocket Greek dictionary and Google Translate, Terry concludes his reply by stating, "truth is truth and error is error. And in my determination not to let error stand, I yield to no man, no matter what his reputation or standing in anything that might be called 'the conservative movement.'"[30]

Additionally, Chick Publications raised concerns about the CBP's habit of removing verses from the translated Bible. In conclusion, their article asked the questions:

Forcing the Bible to conform to a certain political agenda, no matter if one happens to agree with that agenda, is a perversion of the Word of God and should therefore be opposed by Christians as much as ‘politically correct’ Bibles.[32]

As of May 2010 the entire Gospels are finished (behind the stated goal of having it done before Easter[33]). The project isn't so much a 'translation' as a anachronistic dumbing down of the King James Version (which is conveniently not copyrighted) with the occasional conservative twist. The KJV verses are put right beside the "Proposed Conservative Translation". The contrast between the archaic literary prose of the KJV and the artless, agenda-ridden language of the Conservative Bible is stunning. For example, the KJV of Luke 11:53-4 reads:

The Conservative Bible "translation" (done by Andy himself) reads:

In addition to trying to interject the modern concept of political correctness into the Bible Andy has his Lord and Saviour telling people off.

While many groups in the past have tried to rewrite the Bible to fit their agenda none has ever been this obvious about it, while simultaneously reducing the book's quality to just below a Dan Brown novel. Heathens would have trouble topping this heresy.

In late September and early October 2009, the project attracted more widespread attention on the internet, initially from religious or conservative bloggers, before being picked up by others, and even columnists from some major journals.

Examples of websites and blogs criticising or ridiculing the project[edit]

Examples of blogs defending the project[edit]

Examples of Andy defending his project[edit]