A US Army reservist poses with the corpse of a man tortured to death in Abu Ghraib.

Torture is the act of causing physical or mental anguish, pain, and/or harm, sometimes in order to achieve a specific result, such as obtaining information ("enhanced interrogation" for the politically correct), or sometimes as revenge or to satisfy the sadistic nature of the torturer. During the Inquisition, torture was specifically and formally approved by Pope Innocent IV with his 1252 law, the papal bull Ad Extirpanda.[2]

In spite of a long history of the use of torture by governments, religions, and individuals, research has shown that information obtained by torture is notoriously unreliable, particularly for three reasons:[3][4]

In addition to those three problems of not getting accurate information, torture hurts your overall policy effectiveness in several ways. This is more applicable for governments than for, say, bank robbers, but all the same: 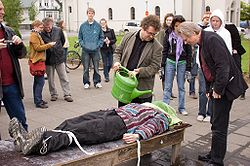 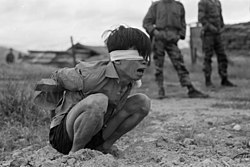 US soldiers torture a Viet Cong prisoner with stress positions during the Vietnam War.

Although outlawed by most countries, torture is still practiced by some, particularly dictatorships and other tyrannical or authoritarian governments. The United States has a prohibition against it, but this was all-too-frequently circumvented by outsourcing the dirty work to private contractors, ensuring that no one was actually tortured on U.S. soil, and, as a last resort, redefining the Geneva Conventions to suit.[16] Ain't obeying the law grand, Republicans? There is increasing evidence that the US, in many cases, directly engaged in torture. They just made sure to do it in gray areas, like Guantanamo.[17][18][19] 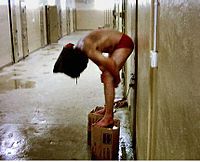 An example of the unreliability of torture can, surprisingly, be gleaned from the Larry Craig affair. Apparently, just the thought of the damage to his reputation and position in society made him plead guilty to a sex-related disorderly conduct charge, even though he now claims he was not guilty. Imagine what he would wrongly plead guilty to if torture, rather than shame, were in the offing? And this man was a tough conservative, not a librul weakling.

The military (and, formerly, the CIA) claimed that torture is a worthless tactic, as the victim will admit anything to stop the torture. For gathering useful intelligence, gaining trust, bribery, or undercover operations are far more useful tactics and don't result in the physical or mental destruction of anyone.

With regard to terrorism, also, torture can also serve as a catalyst to increase terrorist activity. A terrorist organization needs to play to prejudices or other discontent on the part of its potential recruits; beating, arresting, and especially torturing or killing people gives terrorists propaganda fuel.[20] Treating them like human beings and entering into legitimate, fair political negotiation (even when abstaining from appeasing them) does not.

Most recently, the 2014 Senate report detailing how the US tortured prisoners during the War on Terror was a propaganda goldmine for overseas terrorist groups like Al-Qaeda, the Taliban, and DAESH.[21] The FBI and the Department of Homeland Security released a joint statement saying: "The FBI, DHS, and [National Counterterrorism Center] assess the most likely impact of the report will be attempts by foreign terrorist organizations … and their online supporters to exploit the report’s findings by claiming they confirm the U.S. government’s perceived hypocrisy and oppression of Muslims."[21] The international intelligence community has also noted that DAESH dresses its Western beheading victims in orange jumpsuits to deliberately evoke similarities to prisoners of Guantanamo Bay.[21]

Those who advocate the use of torture frequently invoke the "ticking bomb" scenario: the need to extract from someone the location of a bomb, usually specified as nuclear, set to go off at an unknown (to the torturers) location at some time in the immediate future.[22] This is stupid because such a scenario has never happened, will never happen, and torture will be used regardless of whether there is a "ticking bomb" or not.[23][24]

Besides, even if this kind of situation did occur, the person being tortured knows that he is in the position of power and needs only to resist for a finite period of time. In this situation, resistance to torture becomes easier, and delaying tactics such as feigning confusion (if it's necessary to feign it), easily produced disinformation, or prolonged silence will achieve the aim of running out the clock. It isn't hard to figure this out. It's already been observed that torture tends to piss the victim off and make them more fanatical and more determined to either resist or mislead their torturers.[25] Your enemy's enemy might be your friend, but your torturer certainly isn't. 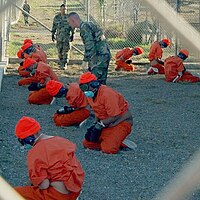 It has been admitted the US military engaged in torture, including waterboarding, at the US Navy base in Guantanamo Bay, Cuba (in fact, many of the methods later used at Abu Ghraib apparently came from Guantanamo).[26]) The detention facility (Camp Delta, formerly Camp X-Ray) is an interesting study into the follies of America's current policies regarding detainees. Despite the inhumane treatment of detainees, clear violations of the Geneva Convention (and the Vienna Convention on Treaties, which allows the camp to exist in the first place), Camp Delta and X-Ray have gathered little workable intelligence. While some high-ranking al-Qaeda members have been captured or killed, the organization (which is, in reality, more a philosophy than an actual organization) still remains active worldwide. The insurgency in Afghanistan is as strong as ever, and al-Qaeda retains significant influence throughout the Middle East and Africa. Camp Delta is still operational to this day, despite Barack Obama's promise to close it.

Karl Rove, also known as "Bush's brain," said he "was proud we used techniques that broke the will of these terrorists."[27] Exactly what Imperial Japan said.

Extraordinary rendition is when the United States, determined to break someone without dirtying its own hands, sends a suspect to a state that engages in the worst kind of torture. For example, despite all the heated rhetoric the US promulgates about Syria, some of the people the US has captured have been sent there to be tortured.

When then-Attorney General John Ashcroft was in the hospital (and under sedation), his deputy found that many of the programs of the Bush administration (possibly including torture) were illegal. Alberto Gonzales, then White House Counsel, went to visit Ashcroft in the hospital to try to get him to sign off on the programs. Ashcroft refused, rightfully understanding that he was in no position to sign off on anything, and told Gonzalez to talk to his deputy, who was currently the acting Attorney General. Then, after getting out of the hospital, Ashcroft signed off anyway.[28]

A June 2008 international survey of public attitudes to torture is rather depressing for the reality-based community: only 53% think that "All torture should be prohibited." This contrasts with the UK where the figure is 82%. Oddly enough, most of the current techniques used by Americans were developed by the British.[29]

The US falls below states like Ukraine, Poland, and Egypt and 13% think "Torture should generally be allowed."[30]

An historical aside: In ancient Greece and Rome, and possibly elsewhere, the testimony of a slave could only be accepted by an official tribunal or court after the slave had been tortured. Surprisingly, Greece and Rome were considered at the time to be civilized countries. Of course, pretty much all and every society throughout history has considered itself to be the most advanced civilization ever...