From RationalWiki
(Redirected from Franco)
Jump to navigation Jump to search 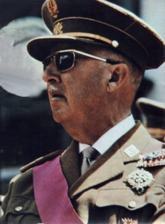 Senile fascism is the best fascism.

Francisco Franco Bahamonde (1892–1975) was a stuffy tyrant[1] the totalitarian[2] dictator of Spain ("Caudillo de España por la Gracia de Dios") between 1939 and 1975, who came to power after leading a military revolt - and a three year civil war - by a coalition of monarchists, capitalists, nationalists, corporatists, ultramontane Roman Catholics and fascists against the legitimate government of the left-wing Spanish Second Republic (initially run by a coalition that ranged across the left, but increasingly dominated by the Communists[note 1]). And he is still dead

Although Franco's political trajectory was different from those of Adolf Hitler and Benito Mussolini (if only because he managed to survive WW2 by declaring Spain's neutrality while secretly collaborating with both sides), he came to preside over what was certainly a regime that satisfied the criteria of the "fascist minimum" (as encapsulated by Roger Griffin) between 1939 and 1959, through the Falange Española Tradicionalista y de las JONS which Franco and his brother-in-law Ramón Serrano Suñer amalgamated from the Falange Española y de las JONS and the Carlist Comunión Tradicionalista. Serrano Suñer and the Falange were thus charged with organizing the political apparatus of the regime with the Falange serving to sustain the momentum of mass mobilization which resulted from the Spanish Civil War, and did not exist under more traditionally conservative dictators such as Admiral Miklos Horthy in Hungary or Józef Piłsudski in Poland.

Following the fragmentation of the Republican forces he defeated their remnant along with the anarchists in Catalonia, various communist groupings, and the local nationalist movements in other parts of Spain.

Franco ruled Spain from the end of the Spanish Civil War in 1939 until his death in 1975. While fighting the Spanish Civil War he received extensive material and economic aid from Nazi Germany and the fascists in Italy, eventually joining the Anti-Comintern Pact in March of 1939. Unlike fellow Anti-Comintern Pact members Romania and Hungary, however, Spain did not join the Tripartite Pact. Franco supported the Axis through material support, propaganda, and the sending of the Blue Division on the Eastern Front which fought within the Wehrmacht, but Spain ultimately did not enter World War II as there was no guarantee that Spain would be in possession of the French colonies in Northern Africa under the Nazi Order - both Franco and Hitler were aware of Spain's limited economic and military efficacy. Most revealingly Franco offered the entry of Spain as a belligerent power to Hitler when Spain's wartime position was changed from "neutrality" to "non-belligerence" following the Fall of France in 1940, confident an Axis victory was imminent and that Spain would be granted Empire in North Africa without suffering the infrastructural damage she would have suffered otherwise. This wartime position was changed to "moral belligerence" once the Blue Division was deployed and only changed back to "neutrality" following pressure by the Western Allies to withdraw the Blue Division and Operation Torch. Spain continued to export tungsten and publish propaganda about V2 attacks in London as late as the closing days in the war.

Despite this and the oppression he inflicted on the people of Spain, during the Cold War he became an ally of the United States against the Soviet Union after having been initially ostracised following the end of World War II. In many ways, U.S. military aid helped keep his regime "stable" in the same way that it kept so many other tyrannies "stable." This has allowed the perpetuation of myths surrounding the regime, hindering historical rapprochement in Spain today, the most prominent of these being Franco as purely a traditional conservative whose violence was "mild" and that he was neutral in World War II, steadfastly refusing the advances of war - contrary to what a vast array of primary sources from the era reveal. Spain was, however, denied membership in NATO as membership in an alliance against the authoritarian Soviets and its Warsaw Bloc allies would have looked bad given the Francoist regime's brutality.

The summary executions of captured Republicans did not end until the early 1960s. The typical summary execution of a Republican prisoner was called a paseo, or a stroll, in which the victim or victims were taken to secluded areas and shot in the head. Another common mode of execution in Francoist times was the particularly delightful Garrote - an instrument of what can only be described as murderous torture. One estimate is that there are as many 30,000 unrecovered bodies in mass graves.[3] The exact number of people who died as a result of Francoist repression during and immediately after the Spanish Civil War is not known for certain, but it is likely well into the hundreds of thousands, much higher than the number killed by the Red Terror in Spain during the same period.[4] In addition, up to 200,000 Spaniards died of starvation during Los Años de Hambre (the Years of Hunger).[5]

Towards the end of his rule he accepted King Juan Carlos I as his successor; contrary to expectations, the King turned out to be a democrat and turned Spain into a constitutional monarchy, in which he retained only a figurehead role.[6]

Franco had about the most protracted death imaginable, which is what non-Spanish mostly remember him for. About every organ in his body failed before he finally kicked off. While his death was mourned by some, it resulted in dancing in the streets in the Basque country and it is claimed that the Basque city of Bilbao ran out of champagne. An attempted coup d'etat by die-hard Franco supporters in 1981 failed miserably, and otherwise Spain transitioned smoothly back into a democracy, albeit as a constitutional monarchy, as opposed to the republic Franco overthrew.