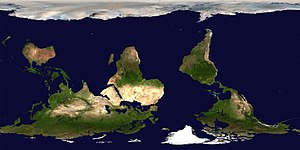 What the world really looks like. (The Southern Hemisphere is larger.)

Since there's quite a small number of Australians and New Zealanders, they've been lumped together, but seriously, they'd hate that. They may sound similar, have similar flags, have the same queen, fight most of the same wars, produce nice wine and use dollars, but they're different in a lot of other ways. The landscape of Australia and New Zealand, is completely different (except Tasmania maybe.) Skiing's better in New Zealand, although Aussies are better at cricket. They're about equal in sailing.

Australia's natives are few in numbers, and come from many tribes, whereas in New Zealand, they form a highly visible ten percent of the population, and have the same cultural heritage.

Australia still has more sheep, though, than New Zealand, but not a lot of people know that.

Kiwi fruit comes from China, not New Zealand too...