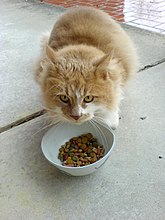 Your cat is unlikely to appreciate having its photo taken during mealtimes.

Cat food refers to commercially available meal preparations for cats. These come in either dry or wet formats. Or cheezburger.

Cat food is really meant to appeal to human consumers, since they're the ones buying it, so a lot of effort is put into making the stuff look and smell good to humans.

Contrary to the opinion of some cats, touching the fishy is not OK.[note 1]

Some of the more zealous vegans and vegetarians promote meat-free cat foods out of the belief that they're healthier and/or more ethical. Though some necessary nutrients not available in meat-free diets can be supplied by synthetic supplements[1]—one study found that cats fed fortified vegetarian pet foods or home-made meals with taurine supplementation were not deficient in taurine[2]—there are other health problems associated with vegan cat diets. A diet composed primarily of non-meat substances can, in cats, lead to alkaline urine, which can cause kidney problems.[3][4] In addition, plant-based cat diets usually have too many carbohydrates and not enough protein, which can lead to obesity.[5][6]

Use of vegetarian/vegan cat food is by no means universal, since many (probably most) vegetarians oppose it.[7][6]

; they must consume it in their diet. Taurine deficiency in cats can cause macular degeneration leading to blindness, reproductive, and heart problems.[8] Those die-hard individuals who want nothing to do with animal products or synthetic chemicals may want to get an herbivorous pet instead, as inflicting taurine deficiency on a cat isn't ethical either.

In some jurisdictions, such as Norway,[8] it is illegal to feed cats a meat-free diet.

In the UK during the 1950s and 60s, stories were spread that immigrants, particularly West Indians, were living off cat food. Of course, there is no way to confirm this story one way or the other, but it is a particularly vicious one. Many of the new immigrants were not well-off, so the stories might be seen as a way of simultaneously dehumanising them and emphasising their poverty. In his autobiography, Memoir of a Fascist Childhood, Trevor Grundy mentions how one of his friends in the British Union of Fascists

complained about Oswald Mosley using this myth in the wrong circumstances:

When he [Mosley] talks to Irish ladies with niggers in the basement, he discusses Socrates, Euripides

and Plato, and when he has an audience which includes half the Roman Catholic Church, Colin Wilson, and the reporter from the Times, he tells people about Lassie for the dogs, and Kitty Kat for [the] wogs

A similar meme involving senior citizens on fixed incomes consuming cat food is prevalent in the United States, but the intent is usually to incite pathos rather than revulsion. The role-playing games Cyberpunk 2. 0. 2. 0. and Cyberpunk RED play with this with the "Kibble", a mass-produced, low-cost, synthetic food based on stuff as algae and soy, stated to taste and smell as the cat food of the same name[note 2].

One or two people claim to be addicted to the stuff,[10] and some people even put themselves on YouTube eating it.[11]