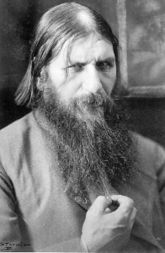 Ra Ra Rasputin, lover of the Russian queen, there was a cat that really was gone!

Grigori Yefimovich Rasputin (Григорий Ефимович Распутин) (1869–1916) was a Russian mystic, their greatest love machine, and a highly influential companion of the Tsar's court just before the Russian Revolution. He is one of the more mysterious people in Russian history. He could also preach the Bible like a preacher; full of ecstasy and fire. According to noted historical revisionist Frank Farian, "it was a shame how he carried on."[1]

Because he danced the kasachok really wunderbar, he came to the attention of Tsaritsa Alexandra. Her son, Alexei, had haemophilia, which was a remarkably common genetic illness amongst the royal families of Europe at the time due to the massive amount of inbreeding going on. Although Alexei's illness was not widely or publicly known, Rasputin was purported to be a sort of faith healer and was called whenever the boy was ill. Perhaps many of Rasputin's purported healing powers could be explained in the usual ways, such as regression to the mean as he was always called after the boy became sick, the queen firmly believed in his powers and his prayers. For her, he was no wheeler dealer and she really did believe he was a holy healer who would heal her son. Because of this, his influence over the Tsaritsa became vast. No doubt this Rasputin had lots of hidden charms, and to Moscow chicks he was such a lovely dear. Except for that one prostitute who tried to kill him, screaming "I have killed the Antichrist!"[2]

When his drinking and lusting and his hunger for power became known to more and more people, the demands to do something about this outrageous man became louder and louder. Rasputin was extremely influential in Tsar Nicholas II's court, to the point where he was falsely rumored to be the power behind the throne.[3] To break his hold over the royal family, a group of nobles assassinated him. The conspirators placed poison in his food, but he ate it all and said, "I feel fine" might have not eaten it at all. There are conflicting accounts about whether poisonous food was found in his system after death.[4]

The legend often continues from there to how he was strangled, beaten, stabbed, and shot four times, but he still struggled. But they didn't quit because they wanted him dead. He was then thrown into the freezing Neva river where it was expected he would drown. His body was found three days later, where it was determined that none of his injuries killed him and in fact he had died of hypothermia after escaping the river. He was then publicly cremated, and it is said he sat up in the pyre, proving he might not have been dead yet (though this is apparently normal for bodies that are not properly prepared Quiet you, he was still alive I tells ya!!).

Accounts of the assassination by those partaking in it had changed several times in the ensuing investigations. One alternative hypothesis, based on evidence gathered by historian Andrew Cook, suggests he was shot in the head by British intelligence agent Oswald Rayner. This is based on the third shot (to the head, which would have been instantly fatal) to enter Rasputin's body was an unjacketed round belonging to a Webley revolver, a weapon almost exclusive to the British Empire at the time. The water found in his lungs is a not a particular indicator of death by drowning, so it is likely that Rasputin was long dead by the time he was thrown in the river. Still a dramatic end, but perhaps a little more believable than the popular story. This was presented in a 2004 edition of the BBC's Timewatch programme.[5]

It is also a possibility that he used the Pontic king, Mithridates VI

's method of developing immunity to poison - adapting the body to small doses habitually so that one would become immune. However, if the assassins were using cyanide (as some attest), then this would be impossible, as cyanide is a toxin that builds up in the body.

Supposedly, his penis was what actually stood up during the cremation severed from his body after his death, and it has since made the rounds. For a while, Russian women in Paris were worshiping something they thought was it, before giving it back to his daughter. After that, an American bought it, but found it wasn't actually a penis, but a sea cucumber.

Today, a museum of erotica in Russia has the "real" penis on display, though many think the thing is actually a geoduck.