From RationalWiki
(Redirected from Pearl Harbor)
Jump to: navigation, search

The Pearl Harbor conspiracy theory states that US President Franklin Delano Roosevelt had foreknowledge of the attack on Pearl Harbor and deliberately allowed the Hawaiian base to be attacked. No scholarly historical research supports the theory (though much pseudo-scholarship does). This is similar to the idea of a false flag operation in motive, but the attack is orchestrated by a real enemy and just allowed to happen.

These are the points generally brought up by the Pearl Harbor theorists:

FDR wanted war with Japan/Germany, and he had been planning it all along.[edit]

This point is actually a recycled criticism of FDR from the days he was actually in office. There was a strongly isolationist atmosphere in the US due to disillusionment with World War I and the Great Depression. Young adults of the Roaring Twenties were referred to as the "Lost Generation." With the economic collapse in 1929, people were far more worried about the state of their own country than international affairs. The Old Right, "Taft Republicans," and the GOP in general were hard-line isolationists (seriously). Conspiracy theorists often like to throw out quotes by FDR's opposition painting him as a warmonger.

However, FDR's arms build-up and America becoming the "Arsenal of Democracy"[1] enjoyed bi-partisan support. The Army was so poor it was training its soldiers with wooden guns during the Depression. FDR was a Wilsonian and supporter of free trade, and so clearly came down on the side of the Allies with policies such as the Lend-Lease Act and the Four Freedoms. However, his stated policy was "all aid short of war" and had issued memos to the military making it known that they should not attempt to engage in any offensive action. Furthermore, FDR was far more concerned with Germany than Japan.

There were clear signs in radio transmissions intercepted by intelligence[edit]

This ignores the signal-to-noise ratio in the intelligence. Most messages were vague or not fully decoded and the ones that were more explicit were awash in a much larger sea of intelligence stating the opposite or having nothing to do with Pearl Harbor. There were also similar problems in intelligence collection to the ones that happened pre-9/11: often, low-level intelligence officers would decode reports and then file them away in some dusty cabinet, never to be seen again. Communication between agencies was not perfect or even that good and so a full picture of what the intelligence suggested never emerged. If anything, the conspiracy theories are a good argument for streamlining intelligence, rather than arguments for a real conspiracy. Indeed, the creation of the CIA was supposed to solve this problem by introducing a Central Intelligence Agency to correlate and distill clear and concise reports from the mass of raw intelligence gathered by all the various US intelligence services.

There is also the fact that intelligence gathered the week of the attack suggested that Japanese forces were most likely moving toward Thailand or Malaysia in that time frame. The Navy's phone taps in the Japanese consulate were found and removed about a week before the attack as well. Overall, the United States' military intelligence agencies had built up, by late November 1941, convincing intelligence that Japan was getting ready for a massive assault into Southeast Asia to seize the crucial natural resources it needed to continue its imperial ambitions (the Dutch East Indies and, to be fair Japan, attacked Borneo 10 days later[2] so the information less wrong than incomplete), and the War and Navy Departments even sent out messages warning of war to major commands at the end of November. The problem was that nobody seemed to anticipate that Japan might want to take out a potential major obstacle to this operation, the US Pacific Fleet, first.

The McCollum memo, outlining a strategy in the Pacific, proves war was the goal[edit]

More circumstantial evidence.[3] Again, FDR, as well as his military advisors and naval officers in the Pacific, were wary of the growing Japanese empire and the possibility that it could strike the US. Every country draws up war plans for preparation for vast numbers of situations that may never occur. This sort of thing isn't unique to the run-up to Pearl Harbor.[note 1] The memo itself, however, was not a blueprint for all-out war, but aimed at containment of Japan (though it does make a brief mention of provocation). In addition, it never went all the way up the chain of command to Roosevelt himself.

This assertion, by the way, still leaves open the question of what sort of incredibly clever and competent conspiratorial leadership would sacrifice a large portion of the Pacific Ocean fleet, at enormous military and economic cost, in order to begin a naval war with an already-aggressive Pacific power.

resulted in the sinking of both vessels. Many people found this a strange incident. Firstly, the Sydney, a modern cruiser, should have had little difficulty defeating the Kormoran. Secondly, the large majority of the crew of Kormoran survived, but there were no survivors from the Sydney, which made it the largest Allied ship to sink with all hands during WW2.

A conspiracy theory has been put forward by some people, notably Michael Montgomery, son of the Sydney's navigator. This claims that the Germans were assisted by a Japanese submarine, and that this submarine then machine-gunned survivors from the Sydney to cover up their involvement. Also, it claims the Australians, British and Americans realised this but kept quiet about this as part of the general Pearl Harbor conspiracy. [4]

Others have disputed this. The disparity between Kormoran and Sydney was not quite as great as is sometimes assumed, and in a battle at close range, where Kormoran had the element of surprise, they could have been more evenly matched. Also, it was not that unusual for vessels of Sydney's size to sink with no or very few survivors, a number of larger Japanese ships sank with all hands during WW2. [5] 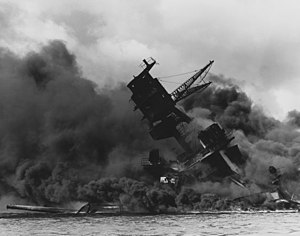 USS Arizona sinks, along with this theory.

A Japanese midget submarine was sunk before the bombing began[edit]

This is an argument for incompetence rather than conspiracy. If FDR knew the attack was coming but the Navy didn't, this tells us nothing. If FDR knew it and had informed Navy higher-ups to ignore it, then we're getting into vast conspiratorial territory and assume that none of the informed Naval officers ever squealed, even in memoirs later in life. If everyone knew about it, it's an even more vast conspiracy and it wouldn't make much sense to fire on the sub if they wanted Pearl Harbor to be attacked. What actually happened was that one of the officers was informed of the incident and took his men off their posts to breakfast. In addition, the ship that reported the incident sent a message saying it had attacked a sub, not sunk it.

Three aircraft carriers were out of port on war games. They obviously did this to save the carriers[edit]

If this were true it would have made FDR and his co-conspirators radical naval visionaries for their time. The thing is, battleships were considered of primary importance in those days as carriers were largely untested weapons of war: in US doctrine, they were not even regarded as capital ships, instead being considered escort vessels for battleships. If this were a conspiracy, letting the enemy take out such a huge portion of your fleet, even sans the three carriers, ranks as a massive failure at best and batshit crazy at worst. In addition — if it were a conspiracy — wouldn't it have been better to launch a counter-attack just as Japanese forces were about to hit Pearl Harbor? That way, it would still look like an attack on the US but the fighters and warships could be saved while the Japanese would be handed a defeat in the first battle of the war. What's more is that one of the carriers, the USS Enterprise, was actually scheduled to be in port on Dec. 7 but was delayed in getting back,[6] making this point even more nonsensical.

The planes were sitting ducks outside of their hangars. They left them out in the open intentionally[edit]

The fighters were actually sitting on the tarmac outside the hangars to prevent an attack. Some of the Naval commanders were afraid of saboteurs breaking into the hangars and messing with the planes, so they left them out in the open where guards could watch them better.

Japanese planes picked up on radar were ignored[edit]

The enlisted men who were stationed at Opana Point, where the Japanese squadrons were detected, were fresh recruits who had never used the equipment before, which itself was still under construction. Conspiracy theorists claim that the admiral in charge, Husband E. Kimmel, ignored the transmission. In reality, it reached a lieutenant at Pearl Harbor, who mistook them for a squadron of B-17 bombers scheduled to arrive in the morning. Even if the lieutenant had been worried enough, the Army Air Force's early warning organization on Oahu was so skeletal that there was nobody in authority he could actually report to.

Kimmel was never made aware of this, and neither was his Army equivalent General Short. In addition, even if they were identified correctly, it's unclear if the naval base would have had sufficient time for preparations to fully fight off the attack.

In June 2001 then-Deputy Secretary of Defense Paul Wolfowitz made a Commencement Address at Michie Stadium in West Point. In this address, he states:

This speech is archived by the United States Department of Defense, lending it more credibility.[7] However, this doesn't conflict with the established facts behind the attack: a bunch of intelligence failures that never got its way up to high command in time. (And why would the DoD website have it widely available if it suggests something else?)

As aforementioned, most versions of the theory would implicate a good chunk of the Pacific fleet's chain of command, up to and including, of course, FDR himself. The higher-ups stationed at Pearl Harbor would not only have to put their men's lives on the line, but also their own. And all without any of them letting anything leak, speaking up about it later, or objecting that the idea would be completely bonkers. This would be truly impressive considering the biggest conspiracy committed by the executive in American history was foiled by some fools who failed to tape over a door lock the right way.

Falling at the first hurdle[edit]

Basically every version of the conspiracy will always have one fatal flaw in any sort of reasoning it puts forward. Japan DID declare war on the US and attacked at Pearl Harbor. Any sort of "FDR knew and let it happen" doesn't really matter when the Japanese Empire is attacking the US. "Stopping" the attack woudn't change the reality of the situation. The conspiracy requires you to believe that if the attack was cut off, somehow the US would just shrug off an unproved attack on its navy, and that the Japanese would immediately give up on the idea of quickly knocking the US out of the Pacific to forward its own goals.

The conspiracy theory originated during WWII among members of the America First Committee, something of an alliance of mostly far-left pacifists and far-right isolationists. The first work to posit the theory was a 1944 pamphlet by John T. Flynn, a paleoconservative journalist and head of the New York Chapter of America First.[8] A surprising number of reputable writers, including historian John Toland[note 2] and novelist Gore Vidal, have endorsed the theories, but they've never gained acceptance among mainstream historians. It has seen a revival in recent years by Truthers attempting to use the "FDR knew!" canard as precedent for 9/11 being a false flag operation.