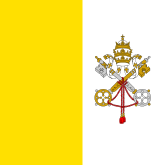 The flag of the Vatican City.

It is the center of the Roman Catholic Church and currently the world's only Christian theocracy (also one of six absolute monarchies, and the only elected one too). Latin is the official language. Nota bene. The term Vatican can also refer to St. Peter's Basilica. It is a sacerdotal theocratic elective absolute monarchy.

In 1965, TIME magazine reported that the Vatican had assets worth in excess of $10 billion, or ($73 billion inflated to 2013 values,[2]) including $1.6 billion in shares of stock, or 15% of the value of all shares listed on the Italian stock exchange at the time.[3] It is unclear what percentage of those assets was held directly by the Holy See itself and the so-called Vatican Bank, or Institute for Works of Religion (IOR). The IOR is charged with providing for the "custody and management of... property... intended for works of religion or charity."[4]

The Vatican also has a staggering collection of world-class artistic treasures, including the Sistine Chapel and St. Peter's Basilica.

The Vatican was created as a land-locked sovereign state by the Lateran Treaty of 1929, between Pope Pius XI and Benito Mussolini as prime minister of Italy. There had previously been Papal States run by the Pope, which included a large tract of the Italian peninsula, but these were absorbed into the new Italy by 1870. The reason it exists is that all the popes from the annexation of the Papal States to the Lateran Treaty self-imposed imprisonment in the Vatican and refused to recognize Italy's existence out of spite for losing the States, so he gave the Church the Vatican in exchange for recognition of Italy.

The "Holy See" and international law[edit]

"Tear down this wall!"

The Holy See is a distinct entity and not synonymous with the tiny Vatican City "state." It comprises the Diocese of Rome, or simply the leadership of the Catholic Church, with the Pope at the top. The distinction between the two bodies is the source of considerable confusion regarding the Vatican's status as a subject of international law: while the Vatican city has a territory and citizens, the traditional attributes of a sovereign state, it is the Holy See which actually maintains international relations and is represented at the UN as a permanent observer with voting rights.[6] The Vatican regularly use their power to oppose contraception and abortion.[7]

Due to the number of tourists visiting the Vatican and its small permanent population of 800 or so, its crime rate has the bizarre attribute of being 133% of its population.[8] It has the distinction of boasting the world's highest concentration of resident Popes, with an average papal density of almost twelve per square mile (six active and six retired).[note 1]

A Masonic lobby or a gay lobby is more accurately termed a secret society as that is how Italians use the word lobby.[10] In Italy the gay lobby means an informal network of gays and others. They help each other get promotion and for example threaten to expose secrets of any member who steps out of line. The lobby may not promote gay interests and may even prefer the status quo with its need for secrecy. Not all members of the gay lobby are even gay, some have corrupt links with gays without being gay themselves.[11]

The Secret Archives that weren't[edit]

Proponents of some unconventional ideas (e.g., that there is a lost continent formerly populated by lemurs or that Latin is derived from Romanian) claim that there is proof for their theories inside the Vatican Secret Archives which are being hidden by the Vatican. Such hypotheses are, however, undercut by the fact that the archives were opened up to scholars (though not the public) in 1881, with over a thousand researchers visiting them every year.[12][13] The word "Secret" is a mistranslation of the word secretum, a more accurate rendering of which would be "personal" or "private", as it refers to the Popes' personal letters.[12][14] Papal papers written after 1939 are withheld from scholars,[15] but these documents are unlikely to have any relevance to the unconventional theories being proposed.