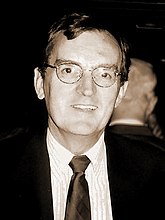 John Derbyshire (1945–) is a paranoid, racist, white supremacist, and homophobic writer whose fetid bigotry proved unacceptable even to the far-right journalists at the conservative journal National Review. In 2012, Derbyshire responded to the street execution of African-American teen Trayvon Martin by unleashing a knee-jerk swarm of sub-moronic assertions based on long-refuted stereotypes about the African-American community.

Pretending to offer advice to his children, he advised that they "stay out of heavily black neighborhoods" and "not attend events likely to draw a lot of blacks." Derbyshire squirted further racist bile: "If planning a trip to a beach or amusement park at some date, find out whether it is likely to be swamped with blacks" and "If you are at some public event at which the number of blacks suddenly swells, leave as quickly as possible." Despite claiming to be a trained mathematician, Derbyshire went on to endorse the fake statistics peddled by the pseudoscience of psychometrics, claiming that "the mean intelligence of blacks is much lower than for whites."[1]

This proved unacceptable even to the National Review, and Derbyshire was summarily relieved of writing duties. Unfortunately, he continues to pollute the internet with his hate-think at Taki's Magazine and VDare, alongside such hardcore racists as neo-Nazi theoretician Kevin MacDonald, pseudo-scientist Steve Sailer, and viciously anti-black blogger/journalist Nicholas Stix. The depth of Derbyshire's warped psychology can be ascertained from the fact that, while demanding that access to the American Dream be blocked for people of color, he himself is an immigrant from Britain. His racism doesn't seem to extend to all races, however, as his wife is Chinese and he has two half-Chinese children whom he is apparently already brainwashing. Qua Derbyshire: "Our children are already tired of being told that they are half English immigrant, half Chinese peasant, one hundred percent American." His children have more sense than him, it seems.[citation needed]

Derbyshire considers himself part of the alt-right movement.[2][3] Unsurprisingly, he is therefore opposed to "Cultural Marxism".[2][3] He believes that the alt-right are open to science since "that's why we're race realists."[2] He also really hates it when people say "there is no such thing as race."[3] According to Derbyshire, it is "not controversial" to say "Jewish elites in the media, arts, show business, and intelligentsia have immensely disproportionate influence."[4][5] He also believes "American Jews have been energetic proponents of multiculturalism and white race guilt."[4]