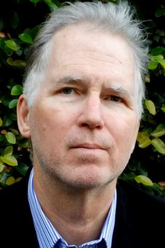 Steve Sailer(1958–) is an American journalist and blogger, frequently described as a white supremacist, [2] who is notable for popularizing the phrase "human biodiversity" in the 1990s. [3][4] Steve began his journalism career briefly working with the National Review, and followed up in the early 2000s in such outlets as the American Conservative

(where, naturally, he was wailing about The Bell Curve.) [5]

Sailer's later work and blogging focused much more heavily on the neo-eugenics HBD concept that he popularized. [4] Sailer's current home is at The Unz Review, where he writes frequent blog posts from his peculiar pseudoscientific viewpoint. [6] Sailer also is a frequent contributor to VDare. [7]

Sailer's body of work mimics the white grievance politics found in the Donald Trump era GOP, and thus his early blogs in the 2000s can, in some way be seen as a sort of an early warning sign regarding the rise of the alt-right. [3][8] Indeed, Sailer's articles reportedly influenced Trump administration policies like Stephen Miller's immigration policy. [9] His blog is rife with primitive racial and gender stereotypes. [10][11] Other noxious beliefs include his belief that homosexuality is not genetic, but is a disease, [10]

Sailer has zero academic in the science of genetics, or biology, or anything even remotely science oriented. His education was a Master of Business Administration

Sailer is a regular at the "immigration restrictionist" hate-site VDare, where his spittle-flecked bigot-bait appears alongside of knuckle-dragging rants by veteran members of the hate-community like neo-nazi theoretician Kevin MacDonald, viciously anti-black blogger Nicholas Stix and notorious homophobe John Derbyshire. Sailer also contributes copiously to the semantic cesspool of Taki Mag, where he channels the tried-and-tested conservative tactic of inventing facts and shamelessly distorting history to serve a fetid agenda of naked hate:[13]

As the years roll on through the Obama Era and the evidence accumulates that the failure of blacks to catch up has less and less to do with white racism, the American media has become increasingly obsessed with pounding the drums over the sins of white people’s forefathers in the ever more distant past. [...] One group of whites, however, has been immune from the blame game. Everybody knows there were no Jews in the South in 1860, and if there had been any, they no doubt would have all been fierce abolitionists standing up fearlessly for the ancient Jewish value of universalism. [...]

Still, the idea of Jews fighting or rooting for the South is bewildering to many Jews today, especially those descended from Russian Socialists who came to America with ideas of class and economic equality and who identified with blacks and other excluded groups.

This is a small example of a general pattern of modern liberal Jews believing their own carefully curated narratives of victimization. Since Jewish predilections play such a massive role in the media, it’s crucial to understand these biases.

Although tEh juice jOoOoOz and their malevolent machinations are arguably número uno on Sailer's list of way-past-unhealthy obsessions, he still finds plenty-a-time in his sorry existence to squirt bigot-venom at African-Americans, the LGBT community, the Hispanic community, undocumented migrants, feminists and, in general, everyone-and-anyone who isn't a white heterosexual able-bodied male like himself. Yet even in his ideal Hitler wet dream, he'd still have a big problem with all the whites from 'mixed bloodlines'; his real ideal world is basically just him and all his friends and family, no-one else stealing his oxygen. A particular fixation of his is with the author Ta-Nahesi Coates, about whom he has written at least ten op eds in the Unz Review.

Just enough to be persona non grata on any respectable message board or sub, not that he shows any signs of desisting from his self-appointed task of pumping hate-memes into the willing minds of his on-line acolytes. Think of him as a dead cat under the floorboards of the internet: worthless, repulsive and raising an unholy stench. But, sadly, also very difficult to get rid of.

In a stopped clock moment, however, he was one of the first people to question A Rape on Campus, even if he managed to be an unrequited obnoxious dickhead all the way through it.[14]

Steve absolutely despises the lead-crime hypothesis, no doubt because it challenges his favorite myths about crime and racism. He has waged an Internet crusade to blandly refute and derail discussions of the topic wherever and whenever he can. If for some reason you want this jackanape to show up on your blog or news article just do a couple of posts on the topic and he'll eventually show up.