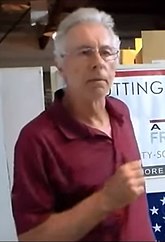 MacDonald at the American Freedom Party conference of 2013

Kevin B. MacDonald (1944–) is a retired professor of psychology. He is the editor of Occidental Observer,[1][2] a "magazine" that covers "white identity, white interests, and the culture of the West"[1] and which the ADL calls "a primary voice for anti-Semitism from far-right intellectuals".[3] MacDonald sits on the Advisory Board of The Occidental Quarterly

, a "journal devoted to the ethnic, racial, and cultural heritage that forms the foundation of Western Civilization"[4] and which has been widely recognized as white nationalist.[5] He is also a frequent contributor to VDARE.[6]

Earlier a Catholic, during his college days he was a peacenik, a flower child, and opposed the Vietnam War. He eventually felt that there were way too many Jews in the anti-war movement and that they tended to take over grassroots movements and make white members tokens. This is where his descent into antisemitism began.[7]

He has since become the director of the American Third Position Party (or "American Freedom Party"),[8] a White nationalist party.[9]

He's noted for using pseudo-scientific evolutionary psychology in his articles and books to advance racialist views of Jews. He claims that Judaism is a "group evolutionary strategy" that evolved as a result of the Jewish disapora.[10] These theories have been poorly received by the literary community and anyone with a brain. In contrast, they are beloved among white supremacists.

He also believes in other HBD ideas, such as Edward Dutton's theory that ethnic Finnish people have evolved to be genetically highly monogamous, cooperative, and trusting and that this is because, over generations, the harsh, cold environment of Finland selected for such traits (wouldn't that also be the case for other cold-weather countries like Sweden and Norway?).

MacDonald joined the Department of Psychology at California State University, Long Beach (CSULB) in 1985. He became a full professor in 1995 and retired in 2014.[11]

His work prior to the 1990s focused on wolf behavior[12][13] and parent-child play.[14][15][16] The vast majority of his publications are on mainstream topics and are featured in mainstream journals.[17]

The CSULB psychology department voted to formally dissociate themselves from his work in 2008.[18] In the same year, the academic senate issued the following statement:[19][20]

While the academic senate defends Dr. Kevin MacDonald’s academic freedom and freedom of speech, as it does for all faculty, it firmly and unequivocally disassociates itself from the anti-Semitic and white ethnocentric views he has expressed.

The best known of his books is his 1998 The Culture of Critique: An Evolutionary Analysis of Jewish Involvement in Twentieth-Century Intellectual and Political Movements.[21] In short: anything left of Mussolini? Blame the Jews.

He also wrote a trilogy of books explaining "Jewish behavior" as a group survival trait.[10] MacDonald claims that this causes Jews to work against the majority culture of the society they live in and, as such, suggests that Jews are parasitically trying to destroy Western Civilization.[22]

MacDonald also advances the usual claims of white supremacists and neo-Nazis: that Jews control American institutions and are trying to alter American culture for their own ends.

The trilogy has been mostly ignored by serious scholars[23] but has been criticised by the right-wing writer Nathan Cofnas as relying on "misrepresented sources and cherry-picked facts".[24] Cofnas later observed: "MacDonald has attempted to neutralize my critique by writing long, tedious rejoinders that have succeeded in creating confusion, and led some onlookers to assume that he must have successfully defended his work because he wrote so many words."[25]

See the main article on this topic: Cultural Marxism

In "Jewish Fear and Loathing of Donald Trump (5): Would Trump’s Defeat Be Blamed On Jews?"[26]

And, as always, what’s really important in thinking about Jewish issues is to focus on media power and financial donations, as well as tracking what the major Jewish organizations are up to. All three of the major networks mentioned in the above charts are managed by Jews (CBS: Leslie Moonves; NBC: Bob Greenblatt; ABC: Ben Sherwood), and CBS (Sumner Redstone’s Viacom) and NBC (the Roberts family’s Comcast) are controlled by Jewish corporations. CNN is managed by Jeff Zucker.

Quite simply, Jews have far more power in the media than any other identifiable group. And yes, Jewish identity makes a difference in content (See Culture Of Critique, Preface to the Paperback Edition , xlvi–lvi).

Jews use the Holocaust to promote liberal policy[edit]

See the main article on this topic: Holocaust profit controversy

In "Using the Moral Capital of the Holocaust to Promote Muslim Migration":[27]

This is an excellent example of how the Holocaust is used to promote immigration and multiculturalism.

Not to be outdone, Newsweek published an op-ed by Eva Schloss, Anne Frank’s stepsister (Anne Frank’s stepsister: Trump ‘acting like another Hitler’). As is typical also of Jewish organizations, refugee policy is seen entirely from the perspective of what is good for Jews, with no mention of costs to European countries, including the well-known sexual depredations of Muslim men.

Again, the holocaust as moral cudgel to promote Jewish interests in immigration and refugee policy.

Notably, MacDonald doesn't offer arguments against those he quotes in this article. Instead, he just says "look, a Jew is referencing the Holocaust to advance their politics" and moves on, as if that were rebuttal enough.

Donald Trump, Jr. retweeted a tweet by Kevin MacDonald that alleged a conspiracy by Hillary Clinton to help Swiss bank UBS in return for money donated to her charity.[28][29]

During unabashed antisemite David Irving's 1996 defamation suit against Holocaust historian Deborah Lipstadt, Irving called a number of witnesses. Only one such witness didn't have to be subpoenaed and came freely: Kevin McDonald.[30]

MacDonald also doubts that Black quarterback Colin Kaepernick "would be seen as viable given that QBs are supposed to be leaders & still lots of Whites on offense" and finds it hard "to see Kaepernick being the leader of a team with White linemen, etc."[31] We will let the reader decide why MacDonald thinks that a black cannot lead whites.

This racism-related article is a stub.
You can help RationalWiki by expanding it.
Retrieved from "https://rationalwiki.org/w/index.php?title=Kevin_MacDonald&oldid=2480721"
Categories:
Hidden categories: