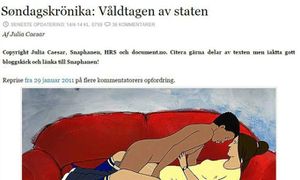 "Raped by the state": Barbro Jöberger on how the state (or government) is "raping" its citizens by allowing immigration

Barbro Jöberger (1944–) is a Swedish former journalist, who now writes racist, anti-immigrant and conspiracy theorist blog posts and books under the pseudonym Julia Caesar. She wrote anonymously as "Julia Caesar" from 2010, and her real identity as a former journalist with Sweden's largest newspaper was revealed by the Swedish press in 2015.[1][2] She advocates biological racism, deportation of immigrants and Islamophobia, and claims there is a vast conspiracy among the country's elite to brainwash the population and make the country multicultural and that Sweden is a dictatorship.[3]

Jöberger has had her own blog and been a frequent contributor to the Danish Snaphanen, the Norwegian Document.no and Human Rights Service, and has also contributed to Gates of Vienna. She is considered highly influential in the Swedish far-right blogosphere, particularly around 2010–2011, and in the rise of the Sweden Democrats.

Jöberger is noted across Scandinavia and beyond for her virulent hatred of Muslims, and also advocates classical biological racism against all non-whites. Among other things, she has argued that Africans are less intelligent than other people, and described the immigration of Africans to Sweden as a "mass import of mentally retarded people."[4]

She worked for the country's largest newspaper Dagens Nyheter from 1970 to 1992, when she retired at the age of 48 due to "electromagnetic hypersensitivity". She also claimed to have been poisoned by dental amalgam, and reportedly claims to have a long list of other esoteric medical conditions unrecognized by medicine.

Wearing her tinfoil hat, she spent four years campaigning and demanding that her local government should pay for removal of everything electric from her home, but interestingly, she seems to have no problem with spending her days in front of the computer to write racist screeds these days.[1] Torbjörn Jerlerup, who met her in the 1990s, writes that she was a conspiracy theorist already at that time, and that "she was fixated on her theory that all Swedes were being poisoned by amalgam and electricity."[5]

While still a journalist at Dagens Nyheter, she wrote articles that claimed that dental amalgam caused tens of thousands of deaths. In 2015, her former employer described her as a "racist hate blogger."[6]