You die; you're gone. But, your passing may haunt those you leave behind and cause them imaginary experiences of your returning to… who knows what?

It is significant that just as "UFOs" changed appearance with cultural changes (Bible stories, mystery airships, Close Encounters of the Third Kind, etc.), ghosts have varied in appearance over time. In the days when bodies were often buried in shrouds, ghosts were reported to be solid, sentient creatures, often dressed in their shrouds, who would meet those who knew them when alive and interact with them.

With the advent of photography in the 19th century, ghost photos were faked using double exposures. This created the cultural expectation of the transparent apparition, often combined with the earlier shrouded figure to create the "classic ghost". More recently, with the advent of the ubiquitous camera phone, photos taken inside dimly-lit buildings or at night will produce "orbs" where the camera flash bounces off dust or insects that pass inside the focal length of the camera and appear blurred and circular. These are claimed to be "spirits" by those too gullible or dim to understand optics.

Finally, any glance at "Genuine ghost photos" online will show that Japanese horror movie makeup is now well-known to the unquiet dead, who have adopted that look by sporting black lips, staring eyes, pointy teeth, and long, lank black hair no matter what they looked like when alive.

Ghostbusters claim there are two main kinds of ghostly hauntings; residual and intelligent.[8] A residual spook is unaware that it's dead and will pass through a room or wash ghostly dishes without interacting with any living people in the vicinity. An intelligent ghost is the one that makes it into the movies because they're the ones that know they are dead and are pissed off. This results in them chasing Pac-Man

around a maze poltergeist activity, strange houses in Amityville, and Freddy Kruger. Or, in a recent notorious Australian case, push some biscuits onto the floor.

In either case, almost all ghostly apparitions are "seen" wearing clothing, which may suggest that your clothes have a soul and that they will die when you do.[9] Ghosts cannot decide whether to haunt the exact location of their death, the site of their burial, or even just somewhere loosely associated with their life. Thus the Australian gangster Mark "Chopper" Read is said to haunt Pentridge Prison, where he served earlier in his life, rather than where he died or is buried. Ghost Tour guides, usually scientifically rigorous in their research, claim that the ghost of the last man hanged at Boggo Road gaol in Brisbane, Australia, haunts the remaining building, screaming and shrieking. However, the cell block where he was hanged was demolished years ago, and he wasn't known for loud screams while alive.

Of course, this free choice for ghosts to haunt pretty much anywhere, not just where they died or were buried, prevents hospitals and graveyards from becoming over-run with shrieking apparitions walking through walls, moving furniture, tapping people on the shoulder, or making the air turn slightly colder. Such places would become unusable, and we can be thankful that this has not happened. It is entirely coincidental that many ghostly manifestations reproduce the perceptual phenomena associated with decreased consciousness. These include "things seen out of the corner of the eye", sudden random spoken words or sounds, the sense of being watched, paralysis, the sensation of a light touch on the body, and being "woken" by a "presence". Any resemblance, no matter how exact, to phenomena associated with sleep and the sleep cycle is to be rejected.

Especially around Halloween, newspapers, television, and the internets are flooded with supposedly factual ghost stories told from the point of view that ghosts are scary, no conventional explanation for them is likely, and witnesses couldn't possibly be exaggerating or embroidering their accounts. Supporting testimony from scientific-sounding experts can make them seem all the more convincing. In truth, ghost stories are a form of largely formulaic storytelling that historians speculate evolved as a way of dealing with deep-rooted fears of death and dying, possibly inspired by cultural memories of 14th century Black Plague victims wrapped in white sheets. Many credulous "true tales" and "eyewitness reports" being published and passed around today are modern-day versions of traditional supernatural folklore that has been with us for hundreds of years.[10]

Somehow even weirder is the Stone Tape theory, put forth by archaeologist-turned-parapsychologist Thomas Charles Lethbridge, which surmises that ghost phenomena are recordings of traumatic experiences held in rocks instead of actual entities. No, seriously. 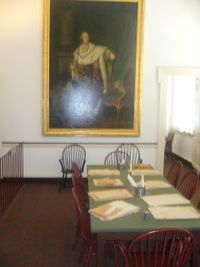 There is nothing to explain since there are no consistently observable phenomena to investigate. Hell, even if there was evidence, there isn't anything that can be used to experiment on such phenomena. The evidence assembled for the existence of ghosts is largely ad hoc — anecdotal and difficult (or impossible) to duplicate or investigate further.

Explanations of ghosts supposedly dodging physical laws (like being semi-transparent or able to pass through walls) date back to Cambridge Platonist Henry Moore in the 17th century, who suggested that souls (and therefore ghosts) are essentially four-dimensional beings, an idea that Johann Karl Friedrich Zöllner promoted in the 19th century.[11]

While there is no scientific evidence for ghosts, there is plenty of evidence about why people think they see ghosts. The complexities and limits of the human brain and perception and physical and environmental explanations can account for ghost sightings. For example, air pressure changes in a house can cause doors to slam, or humidity changes can cause boards to creak.

Distorted shadows, reflections by not-immediately-obvious fixtures (or the flash of the camera itself), out-of-focus objects (the bug on a lens theory has been used to explain many ghost images in videotapes), and even particularities of the equipment itself, coupled to the desire to believe, can explain many ghost sightings and even videos of ghosts. A photo taken inside Norwich Cathedral in 2015, purporting to show the ghost of a Bishop, and widely reported in UK tabloids, was, in fact, a blurry image of a wall section and one of the timbers supporting the aisle roof. Many such photos exist, where a poor photo causes a misidentification of a background object as a ghost. Were the image to be sharply focused, the illusion would disappear.

Other possible explanations include hallucinations due to a mental disorder, disease, or other reasons. Hallucinations, mainly auditory, are more common than many people realize. Another probable explanation could involve the effects of sleep paralysis, especially as many sufferers experience the sensation of being held down by something, sometimes accompanied by terrifying hallucinations.

Belief in ghosts may also come from the refusal to accept the finality of one's mortality, the possible absence of an afterlife, and the inability to cope with the loss of a loved one. Ghosts are the "eternal spirit" of someone who has passed from the earthly realm and is not finally lodged in heaven (nor hell).

) may look ghostly to some people, but it is a natural weather phenomenon with a scientific explanation. And one thing it isn't is fire (kinda, it is hot, though).

Like lightning, St. Elmo's fire is plasma or ionized air that emits a glow. However, it results not from the movement of charged particles from a cloud to the ground, but from a corona discharge caused by an imbalance in electrical charges. This imbalance is between the air and an object around it, and as a tapered surface will discharge at a lower voltage level, it occurs most often on the top of a steeple, mast, or plane wing.[12]

There's a good amount of overlap between belief in ghosts and belief in religion. This is not a problem for ancestor-worshipping Taoists or whatever-you-got-worshipping neopagan witches, but for the Abrahamic religions, it's a pretty extreme heresy. The next time some Christian calls you a soulless atheist for not believing in ghosts because the Bible[note 2] says there's more than dreamed of in your philosophy, tell him that you don't believe in ghosts because you don't want to go to hell and quote 12 at him.[note 3]

Whether or not ghosts exist, it's definitely both dangerous and sinful to try to communicate with them. This is all over the Tanakh, the New Testament, and the Qur'an. And it's especially bad to pay necromancers to help you try. Leviticus 19 doesn't quite say that John Edward is the biggest douche in the universe, but it does say that you'll be "defiled" just by associating with him and those like him. And Deuteronomy 18 makes it clear that he's an abomination — as bad as sacrificing to the wrong god, being gay, or even eating shrimp.[note 4]

But do ghosts exist? The Catholics say we can't be sure,[note 5] and the Mormons give conflicting answers… but most Evangelical Christians, many mainline Protestant churches, and most branches of Islam say no. If you see your departed mother or a famous silent-film star floating through the walls, what you're actually seeing are Satan's evil spirits (for Christians), djinn (for Muslims), or Cybermen (for Whovians). So, the warnings in the Bible and Quran against talking to ghosts are there because it's pretty dangerous to try to communicate with a deceitful evil spirit while convincing yourself that it's grandpa. Plus, to most Christians and Muslims, survival after death is bodily resurrection, not floating around as a spirit — or "ectoplasm", whatever that is. That's central to their theology.[note 6] Not every Abrahamic sect agrees, but they mostly have their own reason to doubt ghosts.[note 7][note 8]

And even if ghosts do exist, they definitely aren't haunting houses.[note 9] Or taking care of unfinished business.[note 10] Or helping and/or getting revenge on the living.[note 11] The only reason for ghostly persistence the Bible doesn't explicitly rule out is Whoopi Goldberg sex.

What about the ghosts of Elijah and Moses? Besides the Transfiguration being a special case and Peter would hardly set up tents for a couple of floating blobs of transparent ectoplasm, Elijah never died,[note 12] so how could he be a ghost?

OK, what about the Witch-King of Endor summoning the dead prophet Samuel for King Saul?[note 13] First, the whole point of the story was to demonstrate how far Saul had fallen and why God had to kill him and anoint a new King, so he's probably not an example you want to follow unless you want a very angry Spirit of Elohim to show up and judge you in person. But here are the major explanations:

So ghosts probably aren't real — but Doom is, so be careful.